From 1903 through 1962, Utah and Colorado played each other nearly ever year. By 1962, they had played 57 games.[2] At that time, it was the second-most played rivalry for both teams (Utah had played Utah State 62 times;[3] Colorado had played Colorado State 61 times[4]). Curiously however, the rivalry was discontinued in 1963, and the teams have not played each other since. With Utah and Colorado joining the Pac-12 in 2011, and with both placed in the conference's new South Division, the two teams are guaranteed to renew their rivalry in the 2011 season. The first game since the realignment is set to be played on Black Friday, a traditional "rivalry day" on which Colorado had previously played against Nebraska in front of a national television audience. 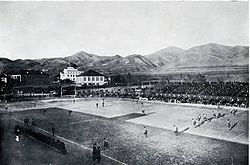 Kickoff during the 1916 Colorado – Utah game

For 38 years, Utah and Colorado were members of the same conference. From 1910 to 1937, they both played in the Rocky Mountain Athletic Conference. And then from 1938 to 1947, they were both members of the Mountain States Athletic Conference. Of those 38 seasons, either Utah or Colorado won at least a share of the conference title 27 times (Utah won 12 outright, and 3 shared; Colorado won 11 outright, and 2 shared). The two schools shared the Mountain States Conference title in 1942.

The most notable meetings during this era occurred in 1936 and 1937:

The 1936 match-up may have featured the greatest gridiron performance of Colorado halfback Byron "Whizzer" White. White ran for one TD from scrimmage that day, and threw for another. But the future U.S. Supreme Court Justice was most dominant on special teams. As punter, White kept Utah's offense backed up all game. And as a kick returner, he also returned one kickoff and two desperate Utah punts for touchdowns. Although Utah had been favored to win, Colorado won convincingly, 31–7. [7] Utah's lone touchdown in the game was a kickoff return for a touchdown by Joseph Wirthlin.[8]

In 1937, Colorado went into Salt Lake undefeated and unchallenged – having outscored opponents 162–6 en route to a 5–0 record. However, they found themselves trailing Utah at halftime, 7–0. But from there, Whizzer White took control of the game. White first got CU on the board with a third-quarter field goal. Then, in the fourth quarter, White returned a Utah punt 85-yards for a touchdown (white also kicked the extra point). Moments later, White sealed the win with a 57-yard touchdown run from scrimmage (and again kicked the extra point). Final Score: Colorado 17, Utah 7.[7][9][10] The Frontiersmen finished the regular season 8–0, but lost to Rice in the 1938 Cotton Bowl. White was a runner-up on the 1937 Heisman Trophy ballot.[11]

In 1948, Colorado left the Mountain States Conference and joined the Big Eight Conference (then known as the Big Seven Conference). But for the next fourteen years, Utah and Colorado played each other nearly every year as part of the teams' non-conference schedules. It was during this time, Colorado began to dominate Utah, winning nine of the thirteen games played during this era, including eight in a row from 1949 to 1958.[2]

The 1961 meeting in Boulder is perhaps the most noteworthy game of the Utah–Colorado football rivalry, for two reasons: 1) the 1961 Colorado team was the most successful squad that either school had ever fielded; and 2) it was a monumental upset. #8 Colorado was the first to score, and they also added another touchdown in the final minutes. But in between, it was all Utah. Final score: Utah 21, Colorado 12.[12] Colorado went on to finish the regular season with a 9–1 record, a #4 national ranking, a Big Eight Conference title, and a berth in the 1962 Orange Bowl. Utah, however, would have to settle for a 6–4 record.

Utah won again the following year in Salt Lake City, 37–21, but that was the last time these schools have played each other in football.

With Utah and Colorado joining the Pac-12 in 2011, the two teams will play each other once again. The first matchup will be a Black Friday game, a day in college football reserved for rivalry matchups; Colorado has had a regular place on Black Friday since the 1980s, but normally played against then-division rival Nebraska, but the conference realignments will separate that rivalry at the same time the long-dormant Colorado–Utah rivalry is restarting.