Law and government of Colorado

Law and government of Colorado 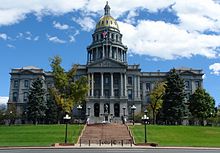 The Constitution of the State of Colorado provides for three branches of government: the legislative, the executive, and the judicial branches.[1]

Sovereignty of the people

Article II of the Constitution of Colorado enacted August 1, 1876, the Bill of Rights, provides:

Section 2. People may alter or abolish form of government − proviso. The people of this state have the sole and exclusive right of governing themselves, as a free, sovereign and independent state; and to alter and abolish their constitution and form of government whenever they may deem it necessary to their safety and happiness, provided, such change be not repugnant to the constitution of the United States.[2][4]

and provided for recall of office holders.[10]

There are also elected members of the Colorado State Board of Education and the Regents of the University of Colorado are elected from districts coterminous with Colorado's congressional districts or at large. As a result, the Governor does not have direct management authority over either the Department of Education or any of the state's institutions of higher education.

Most crimes in Colorado are prosecuted by a district attorney. One district attorney is elected for each of the state's 22 judicial districts in a partisan election. The state attorney general also has power to prosecute certain crimes, and in rare circumstances a special prosecutor may be appointed to prosecute a crime on a case by case basis. Municipal ordinance violations are prosecuted by city attorneys.

The Colorado Court of Appeals is the state intermediate appellate court.

The Colorado District Courts are the state trial courts of general jurisdiction. There are 22 judicial districts in the state, which include one or more of Colorado's 64 counties. They have original jurisdiction in civil cases with any amount in controversy; felony criminal cases, domestic relations, family law, and cases involving minors cases (including adoption, dependency, juvenile delinquency, and paternity actions), probate, and mental health cases. Court filings in District Court generally indicate the county within the district in which the action is filed and the District Court generally conducts proceedings in that action in that county.

With certain exceptions, appeals of right from Districts Courts, the Denver Probate Court and the Denver Juvenile Court are to the Colorado Court of Appeals. There are certain exceptions, in which an appeal of right lies directly to the Colorado Supreme Court. The include capital punishment cases, cases where a law is found to be unconstitutional by a District Court, Water Court cases and discretionary review following county or municipal court appeals of right. The Colorado Court of Appeals also has jurisdiction over appeals directly from certain state administrative bodies.

Most appeals from County Courts, municipal courts and quasi-judicial local decision making bodies are made to a District Court. All appeals other than appeals of right, including most appeals prior to a final judgment in civil cases, are to the Colorado Supreme Court.

When vacancies occurs on the Supreme Court, Court of Appeals, District Court, or County Court, a judicial nominating commission recommends to the governor three (for appellate courts) and two or three (for trial courts) qualified candidates to fill the vacancy. The governor appoint a judge from the commission's list. The supreme court nominating commission recommends candidates to fill vacancies on the Supreme Court and Court of Appeals and is composed of 15 members: The chief justice (as non-voting chair), one lawyer from each of the state's seven congressional districts, and one non-lawyer from each congressional district.

For the District Courts and County Courts, judicial district nominating commission in each of the 22 judicial districts recommend candidates. For each one, a supreme court justice serves as a non-voting chair and the remainder of the committee includes seven residents of the judicial district. In districts with populations greater than 35,000, there are three lawyer and four non-lawyer members. In districts with populations less than 35,000, at least four members are non-lawyers, and it is determined by majority vote of the governor, attorney general, and chief justice how many members will be lawyers.

Denver County Court judges are appointed by the mayor from choices presented by a blue ribbon merit selection committee, and subject to retention elections in the same manner as state court system county court judges.

After two years in office, and then after the expiration of each full term in office, judges are subject to retention elections in which voters can choose to retain or not retain a judge. The vast majority (about 99 percent) of judges are retained by voters. State committees make recommendations to voters on the retention of judges distributed in booklet form with partial justifications prior to each judicial retention election. Voters have never voted not to retain an appellate judge in the forty years that the system has been in place. Voters tend to not retain judges only when there is a well-publicized scandal and usually also a recommendation from a state committee that a judge not be retained. Judges may also be impeached by the legislature (a very rare occurrence) and are monitored by a judicial discipline commission. Many complaints about judges found by the judicial discipline commission to warrant further investigation are resolved when the judge involved retires, rendering the investigation moot. Colorado judges are not subject to recall elections.

The appointment and retention of municipal court judges is governed by municipal ordinance. All or almost all municipal judges are appointed.

County Court judges in smaller counties are not required to be lawyers, but currently there are no more than four non-lawyer state judges in Colorado, all of whom are part-time, and at least three of whom are college educated.

The people of the state of Colorado are additionally represented in the federal government of the United States by two United States Senators and seven Congressional Representatives:

Of Colorado's seven members of the United States House of Representatives, four are Republicans and three are Democrats following the 2010 election.