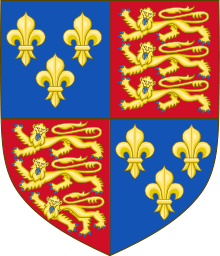 The English colonial empire consisted of a variety of overseas territories colonized, conquered, or otherwise acquired by the former Kingdom of England between the late 16th and early 18th centuries.

The first English overseas settlements were established in Ireland, quickly followed by North America and the West Indies and by trading posts called "factories" in the East Indies, such as Bantam, and in the Indian subcontinent,beginning with Surat. In 1639 a series of English fortresses on the Indian coast was initiated with Fort St George. In 1661, the marriage of King Charles II to Catherine of Braganza brought him as part of her dowry new possessions which had been Portuguese, including Tangier in North Africa and Bombay in India.

In North America, Virginia and Newfoundland were the first centres of English colonization. As the 17th century wore on, Maine, New Hampshire, Salem, Massachusetts Bay, New Scotland, Connecticut, Maryland, and Rhode Island and Providence, were settled. In 1664 New Netherland and New Sweden were taken from the Dutch, becoming New York, New Jersey, and parts of Delaware and Pennsylvania.

In 1707, when England was united with Scotland to form the new state of Great Britain, the English colonies became the foundation of the British Empire. 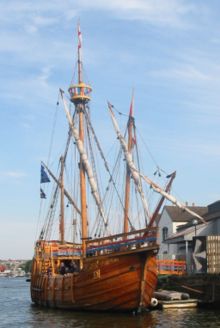 A replica of Cabot's ship, the Matthew

The Voyages of Christopher Columbus began in 1492, and he sighted land in the West Indies on 12 October that year. In 1496, excited by the successes in overseas exploration of the Spanish and the Portuguese, King Henry VII of England commissioned John Cabot to lead a voyage to find a route from the Atlantic to the Spice Islands of Asia, subsequently known as the search for the North West Passage. Cabot sailed in 1497, successfully making landfall on the coast of Newfoundland. There, he believed he had reached Asia and made no attempt to found a permanent colony.[1] He led another voyage to the Americas the following year, but nothing was heard of him or his ships again.[2]

The Protestant Reformation had made enemies of England and Spain, and in 1562 Elizabeth sanctioned the privateers Hawkins and Drake to attack Spanish and Portuguese ships off the coast of West Africa.[3] Later, as the Anglo-Spanish Wars intensified, Elizabeth approved further raids against Spanish ports in the Americas and against shipping returning to Europe with treasure from the New World.[4] Meanwhile, the influential writers Richard Hakluyt and John Dee were beginning to press for the establishment of England's own overseas empire. Spain was well established in the Americas, while Portugal had built up a network of trading posts and fortresses on the coasts of Africa, Brazil, and China, and the French had already begun to settle the Saint Lawrence River, which later became New France.[5]

The first serious attempts to establish English colonies overseas were made in the last quarter of the 16th century, in the reign of Queen Elizabeth.[6] Soon there was an explosion of English colonial activity, driven by men seeking new land, by the pursuit of trade, and by the search for religious freedom. At first, the destination of most English people making a new life overseas was in the West Indies rather than in North America. 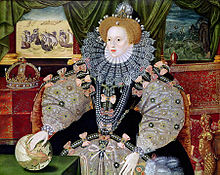 Financed by the Muscovy Company, Martin Frobisher set sail on 7 June 1576 from Blackwall, London, seeking the North West Passage. In August 1576 he landed at Frobisher Bay on Baffin Island and this was marked by the first Church of England service recorded on North American soil. Frobisher returned to Frobisher Bay in 1577, solemnly taking possession of the south side of it in Queen Elizabeth's name. In a third voyage, in 1578, he reached the shores of Greenland and also made an unsuccessful attempt at founding a settlement in Frobisher Bay.[7][8] While on the coast of Greenland, he also claimed that for England.[9]

At the same time, between 1577 and 1580, Sir Francis Drake was circumnavigating the globe. He claimed Elizabeth Island off Cape Horn for his queen, and on 24 August 1578 claimed another Elizabeth Island, in the Straits of Magellan.[10] In 1579 he landed somewhere on the western coast of North America, claiming the area for Elizabeth as "New Albion". However, these claims were not followed up by settlements.[11]

In 1578, while Drake was away on his circumnavigation, Queen Elizabeth granted a patent for overseas exploration to his half-brother Humphrey Gilbert, and that year Gilbert sailed for the West Indies to engage in piracy and to establish a colony in North America. However, the expedition was abandoned before the Atlantic had been crossed. In 1583, Gilbert sailed to Newfoundland, where in a formal ceremony he took possession of the harbour of St John's together with all land within two hundred leagues to the north and south of it, although he left no settlers behind him. He did not survive the return journey to England.[12][13]

On 25 March 1584, Queen Elizabeth I (the "Virgin Queen") granted Sir Walter Raleigh a charter for the colonization of an area of North America which was to be called, in her honour, Virginia. This charter specified that Raleigh had seven years in which to establish a settlement, or else lose his right to do so. Raleigh and Elizabeth intended that the venture should provide riches from the New World and a base from which to send privateers on raids against the treasure fleets of Spain. Raleigh himself never visited North America, although he led expeditions in 1595 and 1617 to the Orinoco River basin in South America in search of the golden city of El Dorado. Instead, he sent others to found the Roanoke Colony, later known as the "Lost Colony".[14]

On 31 December 1600, Elizabeth gave a charter to the East India Company, under the name "The Governor and Company of Merchants of London Trading into the East Indies".[15] The Company established trading posts, which in later centuries evolved into British India, on the coasts of what is now India and Bangladesh.

Most of the new English colonies established in North America and the West Indies, whether successfully or otherwise, were proprietary colonies with Proprietors, appointed to found and govern settlements under mercantile charters granted to joint stock companies. Early examples of these are the Virginia Company, which created the first successful English overseas settlement at Jamestown in 1607, and the Newfoundland Company which settled Cuper's Cove near St. John's, Newfoundland in 1510. Rhode Island, Connecticut, and Massachusetts Bay were also charter colonies.

Between 1640 and 1660, the West Indies were the destination of over two-thirds of English emigrants to the New World. By 1650, there were 44,000 English people in the Caribbean, compared to 12,000 on the Chesapeake and 23,000 in New England.[citation needed] The most substantial English settlement in that period was at Barbados

In 1660, King Charles II established the Royal African Company, essentially a trading company dealing in slaves, led by his brother James, Duke of York. In 1661 Charles's marriage to the Portuguese princess Catherine of Braganza brought him the ports of Tangier in Africa and Bombay in India as part of her dowry. Tangier proved very expensive to hold and was abandoned in 1684.[16]

After the Dutch surrender of Fort Amsterdam to English control in 1664, England took over the Dutch colony of New Netherland, including New Amsterdam. Formalized in 1667, this contributed to the Second Anglo–Dutch War. In 1664 New Netherland was renamed the Province of New York. At the same time, the English also came to control the former New Sweden, in the present-day US State of Delaware, which had also been a Dutch possession and later became part of Pennsylvania. In 1673, the Dutch regained New Netherland, but they gave it up again under the Treaty of Westminster of 1674.

Council of Trade and Foreign Plantations

In 1621, following a downturn in overseas trade which had created financial problems for the Exchequer, King James instructed his Privy Council to establish an ad hoc committee of inquiry to look into the causes of the decline. This was called The Lords of the Committee of the Privy Council appointed for the consideration of all matters relating to Trade and Foreign Plantations. Intended to be a temporary creation, the committee, later called a 'Council', became the origin of the Board of Trade which has had an almost continuous existence since 1621. The Committee quickly took a hand in promoting the more profitable enterprises of the English possessions, and in particular the production of tobacco and sugar.[17] 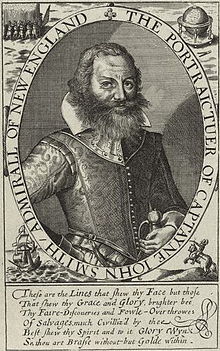 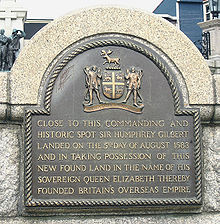 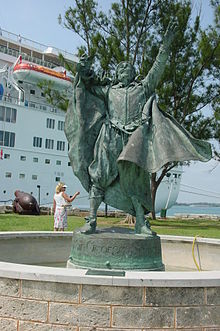 List of English possessions in India and the East Indies 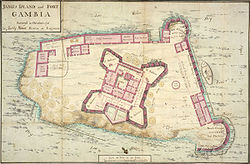 A map of James Island and Fort Gambia.

The Treaty of Union of 1706, which with effect from 1707 combined England and Scotland into a new sovereign state called Great Britain, provided for the subjects of the new state to "have full freedom and intercourse of trade and navigation to and from any port or place within the said united kingdom and the Dominions and Plantations thereunto belonging". While the Treaty of Union also provided for the winding up of the Scottish African and Indian Company, it made no such provision for the English companies or colonies. In effect, with the Union they became British colonies.[30]