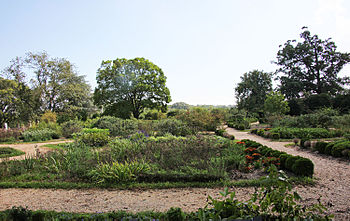 Generalizing about the common house garden in the colonial period in the United States is difficult,[3] as garden plantings and even design varied considerably depending on the time period, wealth, climate, colonial heritage (whether British, French, or Spanish), and the purpose to which the garden was to be put (vegetable, flower, herb, etc.). Because of the overwhelmingly strong British influence in colonial America, the "colonial garden" generally refers to the most common type of garden found in the 13 British colonies. Colonial-era gardens in the southern colonies often exhibited the same design as those in the north.[4] Gardens of the wealthy, however, often exhibited newer gardening ideas, such as the landscape garden or English garden.[5]

These gardens were generally small and close to the house.[6] A straight walkway generally extended on a line equal with the entrance to the house, through the center of the garden.[6] (This layout was often abandoned in the north, where it was more important to site the buildings so they protected the garden from northwest winds.)[7] Perpendicular straight paths often extended from this central path.[6] Planting beds were usually square or rectangular.[6] Planting beds were generally rectilinear as well, although circular beds were also seen.[8] In almost all cases, beds were raised to provide good drainage.[9] Beds could sometimes be bordered with low-growing, neat plants such as chive or pinks.[9] In areas with a Spanish influence, orchards generally were attached to the garden.[3]

The paths in the Colonial American garden were generally of brick, gravel or stone.[7] Brick was more commonly used in the south, however.[9] Enclosure of the garden was common, often with boxwood hedges or wooden fences.[8][10] Picket fences were common, but boxwood was usually used only in the south and tended to be used in the later colonial period.[11]

Plantings in colonial gardens were generally not separated by type. Fruits, herbs, ornamental flowers, and vegetables were usually mixed together in the same planting bed.[12] Ornamental flowers were often grown closer to the house, however, while vegetables which needed space to grow (such as corn, green beans, or pumpkins) would often be grown in larger beds further away.[12] Fruit trees would sometimes line paths, to provide shade and produce,[11] but fruit bushes were as common as fruit trees[13] and always planted in the garden.[14] Usually, however, fruit trees would be planted along the external border of the garden (while wealthier people with more land planted them in orchards).[14] Ornamental shrubs were rare, but could include azalea, lilac, mock orange.[11]

A stand-alone herb garden was uncommon in the United States.[15] However, colonial herb gardens were generally of the same design as other gardens. They were generally small, however, usually less than 5 feet (1.5 m) across, and consisted of four square plots separated by a gravel path.[8] More commonly, herbs were mixed in with flowers and other plants.[16] Commonly planted herbs included angelica, basil, burnet, calendula, caraway, chamomile, chervil, coriander, comfrey, dill, fennel, licorice, mint, nasturtium, parsely, sage, and tarragon.[16] Herbs to a Colonial American did not have the same meaning as it does in modern America. To colonists, "herb" meant not only savory plants added to dishes to enhance flavor but included medicinal plants as well as greens (such as nasturiums and calendulas) meant to be eaten raw or cooked as part of a salad.[12]

The Colonial Revival gardening movement traces its origins to the Centennial International Exhibition of 1876, the first official World's Fair held in the United States. The Centennial Exposition was held in Philadelphia, Pennsylvania, from May 10 to November 10, 1876, and it celebrated the 100th anniversary of the signing of the Declaration of Independence. Although the Colonial Revival gardening movement had already begun a short time before, the Centennial Exposition created intense interest in all things colonial — including the colonial garden.[17]

Colonial Revival gardens also usually incorporate a "feature" like an arbor, bench, or fountain at the center of the garden where the paths intersect.[21] Such features were elements of the late colonial period only.[21]

Several notable examples exist of Colonial Revival gardens, most of them located on the east coast of the United States. They include: