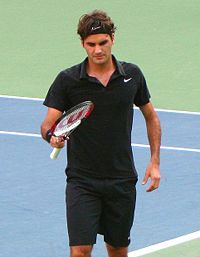 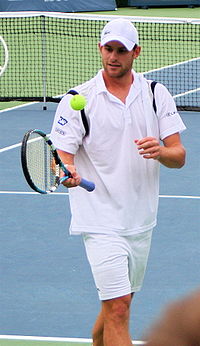 Former World No. 1 Andy Roddick co-holds the record of titles with Michael Chang and Andre Agassi, winning three times in 2006, 2007 and 2008 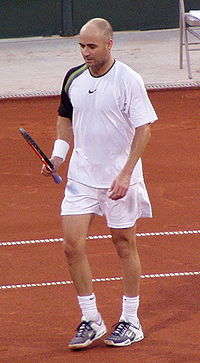 Former World No. 1 Andre Agassi appeared in six finals between 1998 and 2004, winning three and losing three 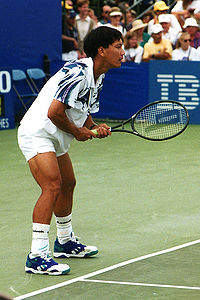 The AAMI Classic is a professional tennis exhibition singles-only tournament, played on outdoor hard courts. It is held annually in January, right before the Australian Open, at the Kooyong Stadium in Kooyong, Melbourne, Australia. Eight invited players participate in the tournament in a promotion/relegation format, playing three matches each over four days to determine the standings from the first place (won all three matches) to the eighth (lost all three matches). Exhibition matches also take place during the tournament, aside of the competition.

Unlike in official tournaments, players retiring during or withdrawing before a match are not automatically eliminated from the tournament, and can still participate to the play-offs or the consolation match –as in the 2008 event, when Nikolay Davydenko withdrew due to fatigue before his play-off draw first round match against Brydan Klein[2], but went on to play and win the play-off draw consolation match against Ivan Ljubičić.[3] Players who decide to withdraw from the competition due to injury are replaced by an alternate for the play-offs or the consolation match –as in the 2006 edition, when David Nalbandian's withdrawal allowed alternate Max Mirnyi to enter the draw.[4] All matches are played in a best-of-three sets with tie-break format.[1]

The AAMI Classic taking place the week before the first Grand Slam of the regular season, the Australian Open, exhibition matches are frequently organized by the event, outside of the competition, to allow top players lacking practice to play matches before the Open.[5]

The first Kooyong exhibition tournament took place in 1988, the year the Australian Open moved from the courts of the Kooyong Lawn Tennis Club, which had become too small to host the event, to the newly-built National Tennis Centre at Flinders Park (which would become known as Melbourne Park in 1996). Initiated by Colin Stubs, still the director of the tournament in 2009,[6] the first Kooyong Invitational was created to continue the tradition of having a world-class tennis tournament at the Kooyong Lawn Tennis Club. Set in December 1988, to allow participants to prepare for the 1989 Australian Open, and played on the club's traditional grass courts, the sixteen-men event comprised fifteen Australian players and Goran Ivanišević from Croatia, and eventually saw the victory of 1988 Australian Open runner-up Pat Cash over countryman Wally Masur in the final.[7]

As it started a sponsoring partnership with Colonial Mutual in 1990, the tournament (known as Colonial Mutual Classic from 1990[8] to 1992,[9] then Colonial Classic from 1993[10] to 2001[11]) changed its competition format to an eight-men round-robin tournament, with each player of the two four-men groups playing two round robin games, and a third match for the standings. The tournament's success increased during the Colonial-sponsored years, and started to attract more and more international players, outside of the Australian consistuency, as it became the most important warm-up event to the first Grand Slam of the season –the only one to be held in the same city as the Open, in Melbourne. The first non-Australian champion was crowned in 1991, when Australian Open quarterfinalist Goran Prpić from Croatia defeated Richard Fromberg for the title, and the first all-foreign final came in 1993, with eventual World No. 1 Thomas Muster from Austria edging Russian Alexander Volkov.[10] The 1993 Kooyong tournament also included for the first time an eight-players women's event, running concurrently with the men's.[12] The first women's Colonial Mutual Classic featured an all-Australian final, where 1992 Barcelona Olympics doubles bronze medalist Rachel McQuillan defeated fellow bronze medalist Nicole Provis in three sets.[13]

The next year, the Colonial Classic was moved from its late-December spot to a mid-January one, right before the 1995 Australian Open, and switched from grass to hard courts, to make the playing conditions closer to that of the Rebound Ace-surfaced Grand Slam tournament. The new-style Colonial Classic (back to being a men's only tournament) saw American champions like Pete Sampras, Andre Agassi and Michael Chang starting to compete, with the latter starting a series of three victories at the event from 1995 to 1997. Eventual 2003 Wimbledon Championships runner-up Mark Philippoussis from Australia won the last edition played in a round-robin format in 1998, as the 1999 event was the first played under the current promotion/relegation system, with Swede Thomas Enqvist coming off as the winner. Agassi became the most successful player at the event after his 1998 runner-up finish, reaching five more finals consecutively from 2000 to 2004 (beating Philippoussis in 2000, Yevgeny Kafelnikov in 2001 and Sébastien Grosjean in 2003). Commonwealth Bank took over the sponsorship of the tournament from 2002 to 2004, transforming the Colonial Classic into the Commonwealth Bank International,[14] before the event went sponsorless in 2005, only known as the Kooyong Classic, as World No. 1 Roger Federer from Switzerland collected his first title in Kooyong.[6]

Questions rose recently concerning the Kooyong event's future, as new tune-up events for the Australian Open flourished, like the Capitala World Tennis Championship in Abu Dhabi or the national year-end championships like the Masters France.[12] Different ways to improve the tournament studied by promoter Colin Stubs include lengthening it beyond four days (despite Roddick's withdrawal in 2009, due to the three-match format already being "too taxing" according to the American[16]), reviving the short-lived women's event, or allowing retired players to compete.[12]