The northern Balkans, including Ratiaria in Dacia Ripensis, in the 6th century 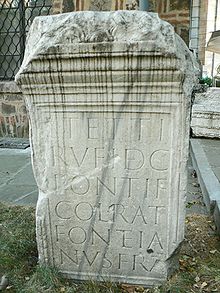 It is located 2 km west of present village Archar in Vidin Province, northwestern Bulgaria. The closest modern cities are Vidin (27 km. to the north west) and Lom (28 km. to the east).

Ratiaria was conquered by the Dacians of Burebista and later by Romans.

The earliest involvement of the Romans occurred in 75 BC, when Gaius Curio Scribonius Burbuleio, prefect of Macedonia, entered this territory to ward off Scordisci, the Dardani and Daci.

Only during the principate of Augustus, the Romans conquered the region, which was organized in the province of Moesia. In 33/34 AD a road is linked between Viminacium and Ratiaria. The city was certainly less important than the near Sirmium, Viminacium and Naissus, but its location along the Danube limes made it a key point to station a legion. Legio IV Flavia Felix was based here at least until the conquest of Dacia (101-106 AD), together with the military fleet of Classis Moesica (during Vespasian).

After the conquest of Dacia, the castrum was abandoned and became a colonia within Moesia Superior under the name Colonia Ulpia Traiana Ratiaria (107 AD), named after its founder, Emperor Trajan.

With the definitive abandonment of Dacia Traiana by Aurelian in 271, the old castra were reopened and was utilized as part of the Dacia Aureliana and later the Eastern Roman Empire.

It is unclear whether Aurelian or the Emperor Diocletian replaced Dacia Aureliana with two provinces[2], but by 285, there were two: – Dacia Mediterranea with its capital at Serdica and Dacia Ripensis, with its capital at Ratiaria. Later these two “Dacias” along with Dardania, Moesia Inferior, and Praevalitana constituted the Diocese of Dacia.

As the capital of Dacia Ripensis, Ratiaria served both as the seat of the military governor (or dux) and as the military base for the Roman legion XIII Gemina.

A number of Roman patricians (aristocrats) lived in Ratiaria, while the nearby Bononia (today's Vidin) had established a small military unit.