Colonel Robert Walpole (18 November 1650 – 18 November 1700) was an English Whig politician who represented the borough of Castle Rising from 1689 to 1700 in the House of Commons of England. Because he held the rank of Colonel in the militia, he was widely known as Colonel Walpole.[1] He is mainly notable for being the father of Sir Robert Walpole. His son, who served during the reigns of George I and George II, is considered to have been the first Prime Minister of Great Britain.[2] He is also known for being the Guinness World Records titular for having the world's longest overdue book.[3] 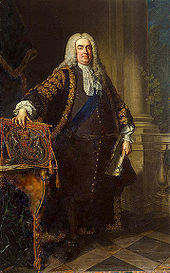 Robert Walpole was born in 1650 to Susan Walpole (née Crane) and Edward Walpole.[2] His father ardently supported Charles II for restoration and would become a Knight of the Bath later in his life.[4] Robert was born in Norfolk on the estate that the Walpole family had lived on for over four hundred years.[5] Walpole owned Houghton Hall in Norfolk. In 1668 Walpole borrowed a German biography book about the Archbishop of Bremen from the library of Sidney Sussex College.[6] It was finally found in 1956 when Professor John Plumb and the 5th Marquess of Cholmondeley discovered the book in Houghton Hall's library. The book was quickly returned, 288 years after it was checked out.[6] He was elected to the House of Commons in 1689 where he would serve for 11 more years.[7] During this time he would also serve as a colonel in the militia.[8]

Walpole was elected from Castle Rising to the House of Commons in January of 1689.[7] He was considered one of the most influential whigs in Parliament at the time, and he was considered the most influential Whig in Norfolk.[7] Walpole was also the deputy lieutenant for Norfolk serving along with the Duke of Norfolk the Lord Lieutenant of Norfolk. He also served as the guardian of the 2nd Viscount Townshend after his father's death. Lord Townshend would go on to marry Walpole's daughter Dorothy.[4] Walpole's son, Sir Robert Walpole, would take on his position in the House of Commons three months after his death. His son would remain a member of Parliament for the next forty years.[9]

In 1671 Robert married Mary Burwell, the daughter of Sir Jeffrey Burwell, a local landowner.[10] The couple had nineteen children together, two of whom were stillborn, and eight more of whom would die in infancy.[11] He is the ancestor of all the Barons Walpole and Earls of Orford, of all creations. He is also the ancestor of the current Marquess of Cholmondeley. Some of his other descendants include the 1st Viscount Nelson,[12] Maria, Duchess of Gloucester and Edinburgh, and Diana, Princess of Wales.[13]

He built and resided at Houghton Hall, Norfolk. 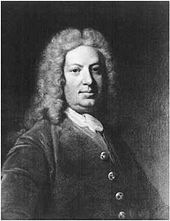 Another of Walpole's sons: Horatio Walpole, 1st Baron Walpole, who was a Member of Parliament.

The nineteen children of Robert and Mary were:

A short time after Walpole died, his eldest living son Robert became a member of Parliament, and would hold the titles of Secretary at War, Treasurer of the Navy, Paymaster of the Forces, First Lord of the Treasury, Chancellor of the Exchequer, Leader of the House of Commons, and the first Prime Minister of Great Britain.[16] Horatio Walpole was a member of Parliament for fifty-four years from 1702 until his death in 1757.[5] During his political career he would serve as Secretary to the Treasury, Chief Secretary for Ireland, British Ambassador to France, Cofferer of the Household, Ambassador to the United Provinces, and the Teller of the Exchequer.[5]