Supreme Court of Justice of Colombia

Supreme Court of Justice of Colombia

The Supreme Court of Colombia (Spanish: Corte Suprema de Justicia de Colombia) in Bogotá is the highest judicial body in civil and penal matters and issues of criminal and civil procedure in Colombia. The Supreme Court of Colombia is not the highest authority in regards to the interpretation of administrative law, constitutional law, and the administration of the judiciary.

The court consists of twenty three magistrates, elected by the same institution in list conformed by the Superior Council of the Judiciary for individual terms of eight years. The court meets at the Palace of Justice in the Bolívar Square of Bogota. 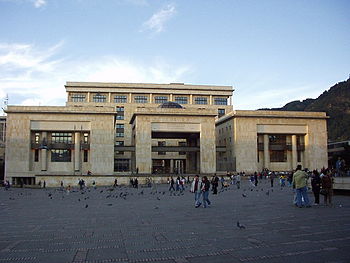