In The beginning (VFA)

Once the VFA agreed to accept Collingwood's bid to join the league, they realised that Collingwood had only 17 matches scheduled when a minimum of 18 was required.

Collingwood looked unlikely to take part in the upcoming VFA season until Carlton's club secretary Jack Melville suggested a solution. Carlton were to cancel a scheduled match with South Ballarat and play an extra game against Collingwood.[1]

At the time they would not have known it, but this would mark the beginning of one of the biggest rivalries in sports history.

On 7 May 1892 at Victoria Park, Collingwood and Carlton faced off for the first time.

Bill Strickland as a Carlton player

Bill Strickland first played VFA football for Carlton in 1885. And, in 1887, Strickland captained the Blues to their second VFA Premiership.

But in 1893, Collingwood convinced Strickland to leave Carlton and play for Collingwood, in what is now looked back as one of the first major player movements in Australian Rules Football history.

Carlton did not show any bitterness towards Collingwood or Strickland, but this would change the history and upcoming of the Collingwood Football Club.

After his retirement, Stickland briefly returned to Collingwood and became the club's first ever coach in 1904.

After Collingwood's VFA Premiership, the eight strongest clubs from the VFA left and joined the new Victorian Football League for the 1897 season.

In Round 7 of the 1897 VFL season Carlton and Collingwood would play against each other in their first encounter in the new VFL. This was also to be the first game held at Princes Park.

Both clubs had a friendly and mutual regard for one another. However, by the 1910 Grand Final, things had started to change.[3]

Some see the 1910 Grand Final as the turning point in the hatred between the two football clubs.

Early in the fourth quarter a huge brawl broke out involving at least thirty players and officials from both clubs.

Collingwood held on to win by 14 points, but four players were reported for starting the big fight and as a result were heavily suspended.

However, Collingwood appealed the Baxter suspension and produced a written declaration from another player, Richard Daykin. Daykin wrote that it was he and not Baxter who had traded blows with Baquie.

The VFL chose to accept Daykin’s confession and cleared Baxter of his 12 month suspension. Soon after Baxter was cleared, Daykin announced his immediate retirement from VFL football. Carlton vowed never to forget this day and they soon had their revenge by winning the Premiership from Collingwood in 1915.

Since joining the VFL in 1897, Collingwood and Carlton have faced off 243 times. The most of any other club.

In 112 years, the two clubs have played in only 22 Finals against each other.

Their first meeting in a final was the 1903 Semi Final. Collingwood won by 4 points before going on to win thir second VFL Premiership.

They have not played against each other in a final since the 1988 Qualifying Final which Carlton won by 38 points.

Since 1993, both the Carlton and Collingwood Football Clubs have joined forces in the battle against Cancer. Every year since 1993, an annual blockbuster between the clubs has helped raise money and awareness in cancer research.[4]

The inaugural Peter Mac Cup between the rivals took place in Round 6 of the 1993 AFL season.

After former Carlton President Richard Pratt passed away in April 2009, it was announced by both clubs that the following match between the rivals would be played for the inaugural Richard Pratt Cup.[5]

The inaugural Richard Pratt Cup between the rivals took place in Round 17 of the 2009 AFL season. 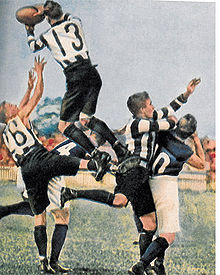 In round 1 of the 1914 VFL season, Collingwood hosted Carlton at Victoria Park. It was during this game when Collingwood's full-forward, Dick Lee, took one of the most recognised marks of all time.

As a result, Lee had broken the ankle strap on his boot after taking the mark. He removed his boots and kicked the goal with his bare foot.

This match was also the first draw between the clubs.

Many Carlton and Collingwood players worked in the local brewery, as did Collingwood coach Jock McHale, who was a foreman. It was therefore a suspicious coincidence when, on the morning of the 1938 VFL Grand Final between two sides, Carlton captain-coach Brighton Diggins was rostered to clean barrels in the brewery steam room, while Collingwood acting captain Albert Collier had the day off. Carlton won the match.[6]

Alex Jesaulenko of Carlton kicked 8 goals for the day and Collingwood's Peter McKenna would top the goal kickers list with 9.[7]

During the 1970 Grand Final, Alex Jesaulenko lept upon Collingwood ruckman Graeme Jenkin to the commentary of Mike Williamson shouting "Oh Jesaulenko, you beauty!".[8]

The mark was the first to be recognised officially as the Mark of the Year, now awarded annually as the Alex Jesaulenko Medal.

Warren Ralph after the siren

On Anzac Day 1984, 68,082 people sat on the edge of their seats in the dying seconds at Waverley Park, as Warren Ralph of Carlton was given a controversial free kick against Collingwood's Peter McCormack.

With Collingwood 6 points in front, the final siren had sounded seconds after the umpire had called the free kick. 25 metres out from goal, Ralph would need to kick a goal to force a draw.

However, it was not meant to be as the ball narrowly missed for a minor score, seeing Collingwood come out 5 point victors in Round 5 of the 1984 VFL season.

In round 2 of the 1994 AFL season, Michael McGuane received the ball and ran from the centre-square along the wing and half-forward flank, closing to 30 metres and kicking it through the goals. He bounced the ball a total of seven times during the famous run, winning the Goal of the Year award for 1994.

On New Year's Eve 1999, the AFL celebrated the start of a new millennium with an early pre-season Ansett Cup match between the two rivals at the MCG.[10]

This game would mark the first time Mick Malthouse would coach Collingwood since his appointment as head coach. But the AFL would be disappointed as less than 20,000 people attended, when a much higher crowd was expected.[11]

However, Carlton ran away with the win, handing Collingwood an 88 point loss to end the 20th Century.[12] A young Brendan Fevola, who had at this stage played only two senior games for the Blues, was the star, kicking 12 goals.

Since 1987 all games between the clubs were no longer scheduled at their traditional suburban home grounds of Princes Park and Victoria Park. To suit the larger crowds, games had been scheduled for the M.C.G. and Waverley Park.

However, in Round 18, 2000, the teams met for one final suburban game due to a minimum contract of games to be played at Princes Park for season 2000. Carlton fans would not be disappointed, seeing the Blues kick eleven goals to one in the third quarter and ultimately record an 111 point win, the greatest margin in any game between the two rivals.[13]

In Round 6 of the 2001 AFL season, the AFL celebrated the Centenary of Federation with two matches from that round, earmarked as Federation Football matches.[14]

Round 6 of that year was fixtured to resemble, as closely as possible, a round of football which was specially scheduled on 9 May 1901 as part of the celebrations around the Opening of Parliament in Melbourne.

All senior players competing in the two matches received a commemorative medal, courtesy of Centenary of Federation, Victoria.

* The other game was between the Brisbane Lions and Geelong at the Gabba.

In Round 18 of the 2002 AFL season, Collingwood got their revenge against Carlton not only for the round 3 loss earlier that year, but for the years that Collingwood missed out while Carlton get to play in the finals as well for the 111-point loss in 2000.

In Nathan Buckley's 200th game, Collingwood showed no mercy to the Blues with a massive record-breaking 108-point victory, helping Carlton receive their first wooden spoon in the clubs 105 year history.[16]

Blues by a point

Both teams were out of finals contention when they met in the last round of the 2004 season. But when Carlton and Collingwood came together at the MCG, the ladder positions became irrelevant.[17]

Collingwood started strong in the first half but their poor kicking in front of goal kept the door open for the Blues. After a five goal third quarter, the Blues took the lead before a late Magpie charge fell short. Despite having four more shots at goal, Collingwood would lose to Carlton by a single point.

The round 21 clash of 2006 could be remembered for several spiteful incidents, but nothing should overshadow the 2006 Goal of the Year.

After first smothering a handball from Collingwood's Tarkyn Lockyer, Carlton goalsneak, Eddie Betts kicked a brilliant banana kick from tight on the boundary line while under pressure from Magpie defender Simon Prestigiacomo.[19]

Players that played for both clubs