University of the Philippines Los Baños College of Development Communication

University of the Philippines Los Baños College of Development Communication

The CDC is currently organized into four departments:

Each department represents a field of specialization the undergraduate student can focus on. Graduate students, on the other hand, have the option of choosing a more generalist curriculum. 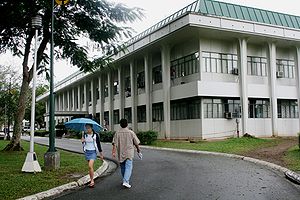 In 1954 the UP College of Agriculture (UPCA) started put up the Office of Extension and Publications (CA-OEP). Among its recruits was Nora C. Quebral, who would later pioneer the academic field.[5] 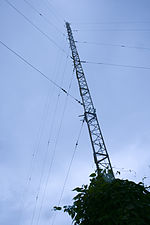 The CDC is located at the University of the Philippines Los Baños campus in College, Laguna, Philippines. The UPLB campus is about 63 km southeast of Metro Manila. It is at the foot of the legendary Mt. Makiling, which hosts one of the few remaining rain forests in Luzon. It is also situated near international and regional research centers and science and technology parks.

The College's building is within UPLB's administration circle and is among the first buildings one sees when entering UPLB's main gate. It is adjacent to Carabao Park, which is UPLB's alumni plaza, and is right across the University's main administration building.

The CDC's facilities include experimental radio station DZLB AM, which broadcasts at 1116 kHz and serves as a developmental community radio station for Laguna, and its sister station DZLB FM, which broadcasts at 97.4 mHz and serves as the campus radio station. Photography students are allowed to use the college's two darkrooms, and two computer laboratories are intended for students studying instructional materials production and Information and Communication Technologies, respectively.

The CDC's reading room's collection of reading materials is specifically geared towards the use of communication to promote social development.

The college is host to a number of student organizations, namely: