The Université de Saint-Boniface, or USB, is a university college affiliated with the University of Manitoba and located in the Saint Boniface district of Winnipeg, Manitoba , Canada. It is oriented primarily towards the French-speaking community of Saint Boniface and others who want to learn, or be educated through, the French language and Franco-Manitoban culture. 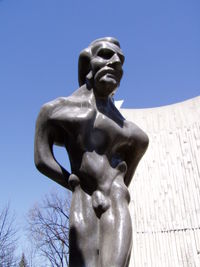 St-Boniface College has a strong Roman Catholic religious affiliation.[1] It originates from a classical school for young men founded on January 12, 1819 by Monseigneur Norbert Provencher.[2] It was incorporated into its current form in 1871.

In the early part of this century, professional education expanded beyond the traditional fields of theology, law and medicine. Graduate training based on the German-inspired American model of specialized course work and the completion of a research thesis was introduced.[1]

The policy of university education initiated in the 1960s responded to population pressure and the belief that higher education was a key to social justice and economic productivity for individuals and for society.[1]

By 2002 the college population was about two-thirds female.[citation needed]

It has about 1,000 regular students and 3,000 in its continuing education division, who study in the main building which is located right next to St. Boniface Cathedral, and a block away from Boulevard Provencher, the street located in the middle of St. Boniface and at the heart of the Franco-Manitoban community.

The Université de Saint-Boniface is a member of L'Association des universités de la francophonie canadienne, a network of academic institutions of the Canadian Francophonie.[3]