The College Light Opera Company (CLOC) is an educational summer stock theatre company based in Falmouth, Massachusetts on Cape Cod. It produces and performs 9 shows during a 9 week season each summer, including two Gilbert & Sullivan comic operas, with performances taking place in the town's the historic Highfield Theatre.

The College Light Opera Company was founded by D. Thomas Tull and Robert Haslun in 1969 immediately following the demise of the Oberlin College Gilbert & Sullivan Players who had performed in Falmouth from 1953 to 1966 [1] Haslun had been an Oberlin College student himself and went on to become Secretary of the College, a post which he held from 1978 to 2007.[2] Although many Oberlin students still participate in College Light Opera Company each summer, it is no longer officially associated with Oberlin College nor is it solely a Gilbert and Sullivan troupe. The company's repertoire now also includes comic operas and operettas by other composers as well as contemporary and classic Broadway musicals such as Evita, Jekyll & Hyde, Brigadoon, and Carousel.

CLOC is currently run by a Board of Trustees with Robert and Ursula Haslun as the producers. Its aim is to provide aspiring young actors and musicians with the opportunity to perform with professional directors and conductors during an 11 week resident programme while providing cultural and musical entertainment to the people of Cape Cod. It is a non profit organization, with an extensive association of donors and patrons.

The company consists of a staff between 25-30, a technical crew and costume crew of 6 members each, a 32-person vocal company and 17-20 person orchestra.

The business staff consists of the two producers - Robert A. and Ursula R. Haslun - a publicity director, an assistant business manager, and two box office treasurers. CLOC also employees a Chef de Cuisine, Director of Plant and property, and resident Costume, Set and Lighting Designer in addition to a technical director and stage manager. The creative staff consists of around 4-6 Stage Directors and Musical Directors, a choreographer, two Associate Conductors and two Accompanists. The Chef de Cuisine, Director of Plant and Property, Design Staff and Directorial staff are often professionals in the field, while the other positions are mostly filled by undergraduate/graduate students, or recent graduates.

The vocal company consists of 32 members. All members are taken on a chorus contract, with casting for principals taking place immediately prior to the start of the season. CLOC is well-known for its choral training and for the high standards of its vocal performances.[citation needed] The 6 member stage crew includes a set designer, lighting designer, prop master and other technicians, while the 6 member costume crew is filled with stitchers and drapers. 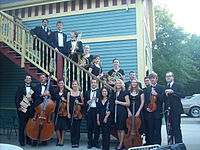 The CLOC Chamber Orchestra in 2008

The College Light Opera Chamber Orchestra consists of 17-20 musicians. Many are music majors, majoring in the instrument they have been contracted to play. In addition to performing in the CLOC theatre productions, the orchestra holds its own "Sunday Soiree", a chamber concert hosted by the College Light Opera Chamber Orchestra and the Cape Cod Conservatory. These concerts were started in the early 1990s by John and Avery Funkhouser and were initially held in the main hall of the West Falmouth Library until moving to the recital hall of the Cape Cod Conservatory in 2006. Summer 2008 marked the CLOC Chamber Orchestra's first symphonic concert with a performance of Schubert's Symphony No. 1 in D Major.

All productions are performed Tuesday-Saturday at 8 pm at the Highfield Theatre with a Thursday matinee at 2 pm.