First Battle of the Marne

First Battle of the Marne

The Battle of the Marne (French: 1re Bataille de la Marne) (also known as the Miracle of the Marne) was a First World War battle fought between 5 and 12 September 1914. It resulted in an Allied victory against the German Army under Chief of Staff Helmuth von Moltke the Younger. The battle effectively ended the month long German offensive that opened the war and had reached the outskirts of Paris. The counterattack of six French field armies and one British army along the Marne River forced the German Imperial Army to abandon its push on Paris and retreat northeast, setting the stage for four years of trench warfare on the Western Front.[2] 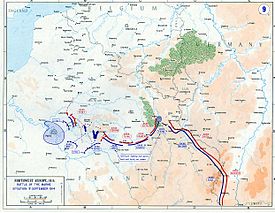 Map of the battle

The first month of the First World War had resulted in a series of victories by German forces in France and Belgium. By the end of August 1914, the whole Allied army on the Western Front had been forced into a general retreat back towards Paris. Meanwhile, the two main German armies that had just conquered Belgium continued to advance through France. It seemed that Paris would be taken as both the French Army and the British Expeditionary Force fell back towards the Marne River.

British troops had suffered heavy casualties during the German attack into France. Field Marshal Sir John French, commander of the British Expeditionary Force (BEF), blamed his heavy losses on French vacillation and uncoordinated French withdrawals. In particular, he blamed French General Lanrezac, commander of the French Fifth Army, for Lanrezac's failure to fight and unannounced pullbacks, though these had effectively saved the French Fifth Army from defeat. Lanrezac, in turn, was furious with Field Marshal French for his refusal to support the Fifth Army at Guise-St. Quentin. 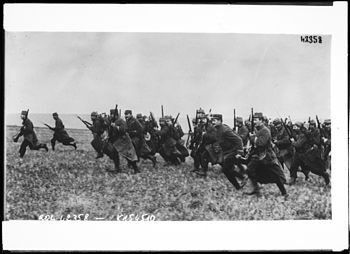 As the German First and Second Armies approached Paris, they began to swerve to the southeast away from Paris in an attempt to envelop the retreating French armies, exposing their right flank to the allies. By 3 September, Joffre had become aware of the German armies' tactical error. On 4 September, he made plans to halt the French and British withdrawal and attack the Germans all along the front with the French Sixth Army (150,000 men) and the aid of the British Expeditionary Force (70,000 men) under the command of Sir John French (who was prompted to join this attack by the British war minister, Lord Kitchener). The attack was set to begin on the morning of 6 September. However, General Alexander von Kluck, the commander of the German First Army, detected the approach of the Allied forces on 5 September and, too late, began to wheel his Army to face the west. In the morning of 5 September, battle commenced when the advancing French Sixth Army came into contact with cavalry patrols from General Hans H. K. Gronau's IV Reserve Corps on the right flank of the German First Army near the Ourcq River. Seizing the initiative in the early afternoon, Gronau's two divisions attacked with light artillery and infantry into the gathering Sixth Army and pushed it back into a defensive posture before the planned allied assault for the following day, but the threat to the French offensive by Kluck's wheeled First Army in this preliminary Battle of the Ourcq (French: Bataille de l'Ourcq) ignored the allied forces advancing against his right flank, and was later reduced both by the arrival of the taxicab reinforcements from Paris and orders for Kluck to retreat to the Aisne River, delivered by Moltke's staff officer, Oberstleutnant Richard Hentsch.[3][4][5]

See also: First Battle of the Marne order of battle

Von Kluck, in turning to meet the potential for attack on his right flank, opened up a 30 mi (48 km)-wide gap in the German lines between his First Army and the German Second Army, commanded by the cautious General Karl von Bülow, which was located to the left of the First Army. Allied reconnaissance planes discovered the gap and reported it to commanders on the ground.[6] The Allies were prompt in exploiting the break in the German lines, dispatching troops from the BEF to join the French Fifth Army in pouring through the gap between the two German armies, the right wing of the Fifth Army simultaneously attacking the German Second Army (the Battle of the Two Morins (French: Bataille des Deux Morins)—named after the two rivers in the area, the Grand Morin and Petit Morin). 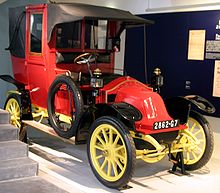 One of the taxi cabs of the Marne.

Nevertheless, the German forces were close to achieving a breakthrough against Maunoury's beleaguered Sixth Army between 6 and 8 September — the Sixth Army was aided on 7 September by 10,000 French reserve infantry troops ferried from Paris, 6,000 of whom were transported in 600 Parisian taxi cabs sent by General Joseph Gallieni, military governor of Paris.[7] The "taxis de la Marne" became in France a symbol of unity and national solidarity beyond their strategical role in the battle (which is likely to have been limited given the number of soldiers transported). The following night, on 8 September, the aggressive French commander General Franchet d'Esperey and his Fifth Army launched a surprise attack against the German Second Army, serving to further widen the gap between the German First and Second Armies. D'Esperey was a recent appointment, Joffre having given him command of the Fifth Army in place of the dismissed General Charles Lanrezac, who was deemed by Joffre to be too cautious and lacking in "offensive spirit."

By 9 September, it looked as though the German First and Second Armies would be totally encircled and destroyed. General von Moltke suffered a nervous breakdown upon hearing of the danger. His subordinates took over and ordered a general retreat to the Aisne River to regroup. The Germans were pursued by the French and British, although the pace of the Allied advance was slow — a mere 12 mi (19 km) a day. The German armies ceased their retreat after 40 mi (64 km), at a point north of the Aisne River, where they dug in, preparing trenches that were to last for several years.

The German retreat between 9 and 13 September marked the abandonment of the Schlieffen Plan. Moltke is said to have reported to the Kaiser: "Your Majesty, we have lost the war." In the aftermath of the battle, both sides dug in and four years of stalemate ensued. 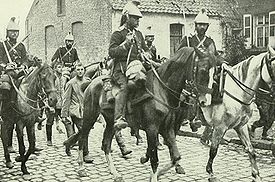 The war became a stalemate after the Allies won the Battle of the Marne. It was the second major clash on the Western Front (after the Battle of the Frontiers) and one of the most important single events of the war. The German defeat and subsequent retreat ended any hopes of a quick victory for Germany in the West. As a result, Germany was forced to face a long, costly war on two fronts.[2]

The Battle of Marne was also one of the first major battles in which reconnaissance planes played a decisive role, by discovering weak points in the German lines and allowing the allies to take advantage of them.[9] The mobility and destructive power of the numerous French 75 batteries engaged in the Battle of the Marne played a key role in slowing down and then halting German progress everywhere.

The First Battle of the Marne is best remembered for the approximately 600 Parisian taxicabs, mainly Renault AGs, commandeered by French authorities and used to transport 6,000 French reserve infantry troops to the battle.[2] Their arrival has traditionally been described as critical in stopping a possible German breakthrough against the Sixth Army.[2] Today, some historians question their real impact. Their impact on morale, however, is undeniable: the taxis de la Marne were perceived as a manifestation of the union sacrée of the French civilian population and its soldiers at the front, reminiscent of the people in arms who had saved the French Republic in 1794.

Over two million men fought in the First Battle of the Marne, of whom more than 500,000 were killed or wounded. French casualties totalled 250,000, 80,000 of them dead, while British casualties were 13,000, 1,700 of them dead. The Germans suffered 220,000 casualties. Of note, the French poet Charles Peguy was killed the day before the beginning of the battle.