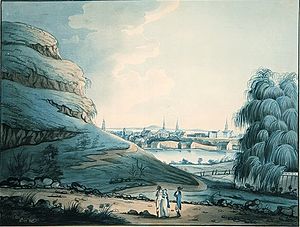 A 1798 watercolor of the Collect Pond - Bayard Mount, a 110' hillock, is in the left foreground. New York City, which then extended to a stockade which roughly parralled current Chambers Street, is visible beyond the southern shore.

The Collect Pond or Fresh Water Pond[1] was a body of fresh water near the southern end of Manhattan Island in New York City, occupying approximately 48 acres (190,000 m2) and as deep as 60 feet (18 m).[1] For the first two hundred years of European settlement of Manhattan Collect Pond was the main water supply. The pond, fed by an underground spring, was located in a valley with Bayard Mount (at 110 feet the tallest hill in lower Manhattan) to the northeast and Kalck Hoek (Dutch for Chalk Hook, named for the numerous oyster shell middens left by the indigenous Native American inhabitants) to the west.

A stream flowed north out of the pond and then west through a salt marsh (which, after being drained, became a meadow by the name of "Lispenard Meadows") to the Hudson River, while another stream issued from the southeastern part of the pond in an easterly direction to the East River.

The southwestern shore of the Collect Pond was the site of a Native American settlement known as Werpoes. A small band of Munsee, the northernmost division of the Lenape, occupied the site until the Dutch settlement of New Amsterdam was established. It is possible that members of this band were the participants in the famed sale of Manhattan (Manahatta) to the Dutch. 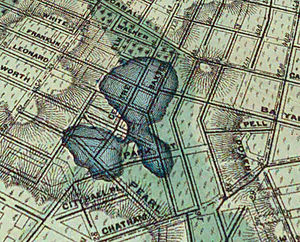 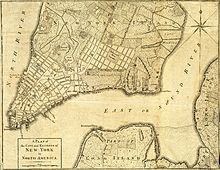 Proposals were made to solve the problem, including the conversion of the pond to a park designed by Pierre L’Enfant, and the creation of a canal between the East and Hudson Rivers. In the end, it was filled in from land removed from nearby Bayard's Mount, the highest hill in lower Manhattan, rechristened after the Revolution "Bunker Hill" (commemorating the American victory at Bunker Hill, Boston; a small battery had fortified Nicholas Bayard's Mount during the Revolution [3] and leveled between 1803 and 1811. By 1813, the Collect was virtually gone.[1]

Several decades later New York City obtained a new, plentiful supply of fresh water from the Croton Aqueduct. The neighborhood known as "Five Points", a notorious slum, developed near the former eastern bank of the Collect and owed its existence in some measure to the poor landfill job (completed during 1811) which created swampy, mosquito-ridden conditions on land that had originally had more well-to-do residents.

New York's jail nicknamed "The Tombs", built on Centre Street during 1838, was on the site of the pond and was constructed on a huge platform of hemlock logs in an attempt to give it secure foundations. The prison building began to subside almost as soon as it was completed and was notorious for leaks in its lowest tier and for its general dampness. When the original Tombs building was condemned and demolished at the end of the century, builders sank enormous concrete caissons to bedrock, as much as 140 feet below street level, in order to give its replacement more secure foundations.

In 1796 Connecticut inventor John Fitch conducted trials of an experimental steamboat on the Collect Pond. On the boat with him was fellow inventor Robert Fulton, Robert R. Livingston, who was the first Chancellor of New York and a signer of the Declaration of Indepenence, and 16-year-old John Hutchings steering.[4] 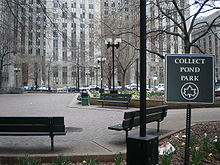 During 1960, a portion of the site of the Collect was given to the New York City Department of Parks and Recreation for conversion into a park. Originally, the park was named "Civil Court Park" due to its proximity to the surrounding courthouse buildings. However, the park was renamed "Collect Pond Park", its current name, to represent its history more accurately. The park is located on the block bordered by Lafayette Street, Leonard Street, Centre Street, and White Street.[5]Currently the park is closed and is being entirely reconstructed with completion expected in 2012. The newly re-built park is to include a pond evocative of the former Collect Pond.

It is still possible to ascertain the rough boundaries of the Collect Pond and original topography in the elevations of the streets in the area, with the lowest elevation being Centre Street which runs in the approximate center of the former pond.