Chalcis
This article is about the Greek city. For the ancient city in Syria of the same name, see Chalcis, Syria.

/ˈkælsɪs/; Modern Greek: Χαλκίδα [xalˈciða], Ancient Greek/Katharevousa: Χαλκίς), the chief town of the island of Euboea in Greece, is situated on the strait of the Evripos at its narrowest point. The name is preserved from antiquity and is derived from the Greek χαλκός (copper, bronze), though there is no trace of any mines in the area. In the late Middle Ages, it was known as Negropont (Italian: Negroponte, "black bridge"; Greek: Νεγροπόντε), a name that was applied to the entire island of Euboea as well. 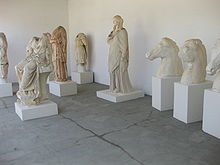 Exchibits in the archaeological museum of Chalcis.

The earliest recorded mention of Chalcis is in the Iliad (2.537), where it is mentioned in the same line as its rival Eretria. It is also documented that the ships set for the Trojan War gathered at Avlis, the south bank of the strait nearby the city. Chamber tombs at Trypa and Vromousa dated to the Mycenaean period were excavated by Papvasileion in 1910. In the 8th and 7th centuries BC, colonists from Chalcis founded thirty townships on the peninsula of Chalcidice, and several important cities in Sicily. Its mineral produce, metal-work, purple and pottery not only found markets among these settlements, but were distributed over the Mediterranean in the ships of Corinth and Samos.

With the help of these allies, Chalcis engaged the rival league of its neighbour Eretria in the so-called Lelantine War, by which it acquired the best agricultural district of Euboea and became the chief city of the island. Early in the 6th century BC, its prosperity was broken by a disastrous war with the Athenians, who expelled the ruling aristocracy and settled a cleruchy on the site. Chalcis subsequently became a member of both the Delian Leagues. Aristotle, the great philosopher, also lived in the city.

In the Hellenistic period, it gained importance as a fortress by which the Macedonian rulers controlled central Greece. It was used by kings Antiochus III of Syria (192 BC) and Mithradates VI of Pontus (88 BC) as a base for invading Greece.

Under Roman rule, Chalcis retained a measure of commercial prosperity; since the 6th century it again served as a fortress for the protection of central Greece against northern invaders. From 1209, it stood under Venetian control as the capital of the Lordship of Negroponte; in 1470, after a long siege, it passed to the Ottomans, who made it the seat of a pasha. In 1688, it was successfully held against a strong Venetian attack.

The modern town received an impetus in its export trade from the establishment of railway connection with Athens and Peiraeus in 1904. In the early 20th century it was composed of two parts—the old walled town towards the Euripus, called the Castro (i.e. the Castle), where the Jewish and Turkish families dwelt; and the more modern suburb that lies outside it, which is chiefly occupied by the Greeks. A part of the walls of the Castro and many of the houses within it were shaken down by the earthquake of 1894; part has been demolished in the widening of the Euripus. The most interesting object is the church of Saint Paraskevi, which was once the chief church of the Venetians; it dates from the Byzantine period, though many of its architectural features are Western. In 1899, Chalcis became the prefectural capital of Euboea.

At the start of the 21st century, Chalcis had about 100,000 inhabitants. The old walls, near the Castro of Kara-Baba (Turkish, "Black Father") near the sea no longer stand. The sizable Jewish community was reduced after the World War II deportation. 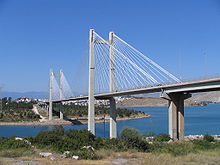 The Chalcis' Bridge connecting the island with the main land of Greece.

The town is now connected to the mainland Greece by two bridges, the "Sliding Bridge" in the west at the narrowest point of the Euripus Strait and a suspension bridge.

The Euripus Strait which separates the city and the island from the mainland was bridged in 411 BC with a wooden bridge. In the time of Justinian the fixed bridge was replaced with a movable structure. The Turks (sometime after 1453) replaced this once again with a fixed bridge. In 1856, a wooden swing bridge was built; in 1896, an iron swing bridge, and in 1962, the existing "sliding bridge". The cable stay suspension bridge which joins Chalcis to the mainland to the south was opened in 1993.

A unique phenomenon takes place at the straits of Euripus. The waters of the gulf can be seen 'racing' parallel to the coast, creating a unique spectacle for people who travel over the bridge.

The municipality Chalcis was formed at the 2011 local government reform by the merger of the following 5 former municipalities, that became municipal units:[1]

In 2003, a bypass of Chalcis was opened from the southern part of the bridge to connect with GR-77, also with access to GR-44.

Chalcis is also served by OSE, the Greek railway network.

The Chalkida football team merged with Lilas Vasilikou for a period of two years (2004–2006). The team was finally dissolved because of financial difficulties. Although there was a team created with the same name (AOX) it does not represent the glorious team of the past.

Chalcis also has a basketball team (AGEX) which plays in the Greek A2 Basketball League with success since 2002, touching many times the promotion to the A1 Greek League.