Iron has a long and varied tradition in the mythology and folklore of the world. As human blood smells of the iron which its cells contain, and blood in many traditions is equated with the life-force, so iron and minerals have been considered to be the blood or life-force of the Earth. This relationship is charted further in literature on geomancy, ley lines and songlines. Fred Hoyle's observation of stellar formation champions iron as the core of celestial bodies.

In Plutarch's mystical writings, iron and lodestone is referred to as the 'bone' or 'core' of the gods. Symbolically, iron is the bone, the foundation or the mineral core of both blood and red ochre.

Cold iron is a poetic and archaic term for iron, referring to the fact that it feels cold to the touch. In modern usage the term has been most associated with folkloric beliefs that iron could ward off ghosts, fairies, witches, and/or other malevolent supernatural creatures.

Francis Grose's 1811 Dictionary of the Vulgar Tongue defines cold iron as "A sword, or any other weapon for cutting or stabbing." This usage often appears as "cold steel" in modern parlance.

"Cold iron" is sometimes asserted to repel, contain, or harm ghosts, fairies, witches, and/or other malevolent supernatural creatures. This belief continued into later superstitions in a number of forms:

In his story, Redgauntlet, the Scottish author Sir Walter Scott wrote, "Your wife's a witch, man; you should nail a horse-shoe on your chamber-door."

Iron, particularly "Cold iron", was employed as a protective substance or charm against faeries. In various folklores, supernatural creatures are held to hold an aversion to iron or even be harmed by the touch of iron. Conversely, amongst Asian traditions, there are tales of ironworking fairies.[citation needed] 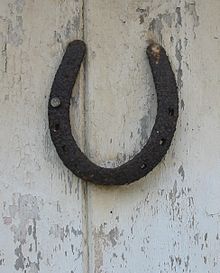 A horseshoe on a door is regarded as a protective talisman in some cultures.

Horseshoes are considered a good luck charm in many cultures, including those of England, Denmark[1] and Estonia, and its shape, fabrication, placement and manner of sourcing are all important. A common tradition is that if a horseshoe is hung on a door with the two ends pointing up (as shown here) then good luck will occur. However, if the two ends point downwards then bad luck will occur. Traditions do differ on this point, though. In some cultures, the horseshoe is hung points down (so the luck pours onto you); in others, it is hung points up (so the luck doesn't fall out); still in others it doesn't matter so long as the horseshoe has been used (not new), was found (not purchased), and can be touched. In all traditions, luck is contained in the shoe and can pour out through the ends. 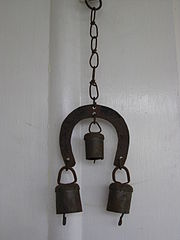 A horseshoe wind chime, used as a good luck charm.

One reputed origin of the tradition of lucky horseshoes is the story of Saint Dunstan and the Devil. Dunstan, who would become the Archbishop of Canterbury in AD 959, was a blacksmith by trade. The story relates that he once nailed a horseshoe to the Devil's hoof when he was asked to reshoe the Devil's horse. This caused the Devil great pain, and Dunstan only agreed to remove the shoe and release the Devil after the Devil promised never to enter a place where a horseshoe is hung over the door.

Another theory concerning the placing of horseshoes above doorways is to ward off Faeries; the theory being that supernatural beings are repelled by iron and as horseshoes were an easily available source of iron, they could be nailed above a door to prevent any unwanted, otherworldly guests.

Thogcha (Tibetan: ཐོག་ལྕགས, Wylie: thog lcags)[2] means 'sky-iron' in Tibetan. Meteoric iron was highly prized throughout the Himalayas where it was included in sophisticated polymetallic alloys for ritual implements such as the singing bowl (Jansen, 1992) and phurba (Müller-Ebeling, et al., 2002).

"Meteoric iron or 'sky-iron' (Tib. gnam lcags) is the supreme substance for forging the physical representation of the vajra or other iron weapons, since it has already been tempered by the celestial gods in its passage across the heavens. The indivisibility of form and emptiness is a perfect metaphor for the image of a meteorite or 'stone fallen from the sky', manifesting out of the voidness of space as a shooting star or fireball, and depositing a chunk of fused 'sky iron' on the earth below. Many vajras held by deities as weapons are described as being forged from meteorite iron, and Tibet, with its high altitude, thin atmosphere and desolate landscape, received an abundance of meteorite fragments. Tibetan vajras were often cast from meteorite iron, and as an act of sympathetic magic a piece of the meteoric iron was often returned to its original site."[3]

In many indigenous Australian Aboriginal peoples' traditions ochre and blood, both high in iron content and considered Maban, are applied to the bodies of dancers for ritual. As Lawlor (1991: p. 102-103) states:

In many Aboriginal rituals and ceremonies, red ochre is rubbed all over the naked bodies of the dancers. In secret, sacred male ceremonies, blood extracted from the veins of the participant's arms is exchanged and rubbed on their bodies. Red ochre is used in similar ways in less secret ceremonies. Blood is also used to fasten the feathers of birds onto people's bodies. Bird feathers contain a protein that is highly magnetically sensitive.

Lawlor (1991: p. 105) quotes the biophysicists F. A. Brown and F. H. Barnwell who have conducted research on the biological effects of the Earth's magnetic field (and particularly how it relates with directionality and wayfinding):

There remains no reasonable doubt that living systems are extraordinarily sensitive to magnetic fields. By extremely simple experiments it is shown that highly diverse plants and animals may have their orientation modified by artificial fields of the order of strength of the geo-magnetic field...The nature of the response properties suggest that the organism is normally integrated with its geo-magnetic environment to a striking degree.[4]

Lawlor then builds on this with citing research conducted on homing pigeons which has pinpointed a tiny crystal in their brain. This crystal which is supersensitive to the Earth's magnetic fields or geomagnetic currents, works in tandem with the birds other wayfinding propensities. As Mathrani (2002) states:

Many animals have the ability to sense the geomagnetic field and utilize it as a source of directional (compass) information. Studies have shown that salamanders and frogs use magnetic fields for orientation when they have to find a way to escape from danger, such as from predators. Other animals that have been known to migrate via the detection of the Earth's magnetic field include sparrows, pigeons, bobolinks, yellow fin tuna fish, honeybees, and bacteria. Magnetite has been found in the tissues of all these organisms.

Crystals of magnetite have been found in some bacteria (e.g., Magnetospirillum magnetotacticum) and in the brains of bees, of termites, of some birds (e.g., the pigeon), and of humans. These crystals are thought to be involved in magnetoreception, the ability to sense the polarity or the inclination of the Earth's magnetic field, and to be involved in navigation. Also, chitons have teeth made of magnetite on their radula making them unique among animals. This means they have an exceptionally abrasive tongue with which to scrape food from rocks.

The study of biomagnetism began with the discoveries of Caltech paleoecologist Heinz Lowenstam in the 1960s.