Computerized approaches to cognitive rehabilitation rose out of the recreational use of video games in the 1970s and the rise of the personal computer in the 1980s. The increased availability of personal computers and accessible programming languages allowed for researchers and clinicians to begin experimenting with computerized cognitive training [2]. Most tasks consisted of simple and repetitive training tasks that would increase in difficulty over time. In one such task participants must sit and observe on screen randomly presented numbers and push a buzzer when they see a specific digit - say, 3 [3]. Similar tasks were developed and administered to individuals demonstrating neuropsychological impairment in areas of attentional processing. The theorized mechanism of action in this approach to cognitive retraining rests on the ability of the generally trained task (recognizing and responding to numbers presented on screen) can generalize to attentional processes employed in every-day life. 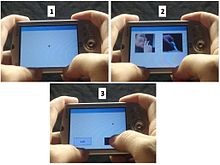 Diagram of sequence of events in a single VP trial. 1) The fixation cross is presented for 500ms, 2) the two pictures – one smoking and one neutral- are displayed, and 3) the probe to which the participant must respond is presented.

The rise of research in cognitive bias modification has led to the recent publication of a special issue of the Journal of Abnormal Psychology focusing on the methods and technologies used for cognitive bias modification in psychopathology [7]. Attentional retraining as cognitive bias modification is predicated on the observed attentional bias evident in psychopathology. The most common task used to retrain attention in psychopathologies is the dot-probe task developed originally by Macleod et al. (1986). In this task two stimuli are briefly presented on screen. One of the stimuli is emotionally salient (a drug cue or threat cue) and the other is neutral. Stimuli (usually words or images) are presented for about 500 milliseconds and then one of the stimuli is replaced by a probe to which the participant must respond. Required responses are usually to indicate what side of the screen the probe is on or to indicate which direction the probe (an arrow in this case) is pointing. The attentional bias is indicated by the difference in reaction time to the probe after it replaces a salient cue versus the reaction time to respond to a cue that replaces the neutral cue. Usually, the anxious participant will be faster in responding to probes replacing salient stimuli than those replacing neutral stimuli. This suggests their attention was drawn preferentially by the previously presented salient stimuli.