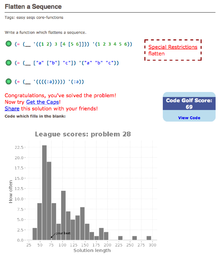 An example round of code golf running on 4clojure.com, showing the problem expressed as a series of unit tests, special requirements for the round's problem, and a results graph (the "league") with a personal score.

Code golf is a type of computer programming competition in which participants strive to achieve the shortest possible code that implements a certain algorithm. Such tournaments may also be named with the programming language used (for example Perl golf).

Whilst the term was apparently first used in 1999 with Perl,[1] and later popularised through the use of Perl to write a program that performed RSA encryption,[2] similar informal competition was known to have been popular with earlier APL hackers and probably others. Today the term has grown to be applied to a wide variety of languages.

The term is derived from the similarity of its scoring system with that of conventional golf - ie: participants seek to achieve the lowest possible score, rather than the highest as is the standard in most sports' scoring systems.

Some code golf questions, such as those posed on general programming sites, may not require implementation in a specific programming language. However, this is limits the style of problems that it is possible for the problem designers to pose (for example, by limiting the use of certain language features). In addition, the creation of such 'open' questions has resulted in the design of code golf specific programming language dialects such as REBMU (a dialect of REBOL). Both online and live competitions may also include time limits.