Code Lyoko: Fall of X.A.N.A. is a video game for the Nintendo DS handheld console. It is the third game based on the French animated television series Code Lyoko. It was released on June 6, 2008 in Europe and[2] June 20, 2008 in the United States.

William is under Xana's control and being forced to fight his friends. The Lyoko warriors travel from Replika to Replika fighting to free him and destroy X.A.N.A.. The ultimate challenge is to beat the mysterious Volcano Replika. 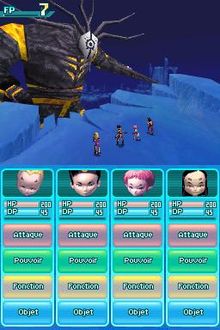 The four warriors battle the Kolossus.

Unlike the previous two games, Code Lyoko: Fall of X.A.N.A. uses an RPG-style interface that combines turn-based and real-time combat. Players move along the landscape of Lyoko from a top-down perspective to progress, triggering switches to lower forcefields and using teleporters to move across gaps. Enemies are stationed at static points along the player's path, and in most cases must be fought in order for the player to progress.

In battle, players have one of four options: attack, power, function, and item. Attacks are general direct-attack abilities. Powers are special abilities which do more damage than regular attacks, but use up data points. Functions are a shared set of skills each character can use for various purposes. Functions require function points to use, but are much more potent than the unique powers each character has. Finally, various items can be used to heal, restore function or data points, or even attack. At certain points, the player takes control of NavSkids to fight in the digital sea. Vehicle combat is limited to a single power and two types of attacks, but otherwise works the same.

By defeating enemies and collecting various prisms scattered around Lyoko, the player can gather Lyoko points, which can be traded for more items in Jeremy's laboratory. The player can devirtualize from Lyoko at any time to spend these points, but must return to the nearest save point. Defeating enemies also earns experience points which increase the player's level, unlocking new attacks and increasing each character's attack and defense. In most cases, defeated enemies remain that way, so players are not penalized for abruptly leaving. Certain parts take place on Earth from a first-person perspective, but they have no effect on gameplay, for the most part serving as a waiting room and an exit to the menu. The cutscenes are a mixture of original scenes and scenes taken from the show.

The game also has a multiplayer mode, wherein players can face each other in various forms of battle.