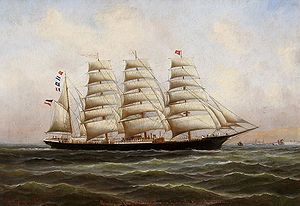 The barque Pisagua. Her Code letters RJPT are flown on the jigger mast, above her ensign