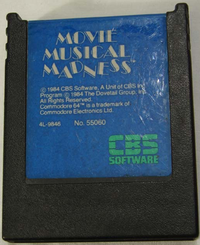 Published by CBS Software in 1984,[3][4] Halftime Battlin' Bands is a multiplayer game that requires a player to compose a marching tune and then lead a rank of band members in complex formations to outmaneuver the opponent player[5] (Single-play mode means that the opponent was the computer). In order to prevent the other band from accomplishing their goals, a bench of weapons are available for use against the other band. As the two opposing teams compete, The Jazz Scats (a group of early beatnik cheerleaders[6][unreliable source?]) cheer for the team that is winning. The player is scored based on time it takes to complete a good routine and quality of the routine.[citation needed]

In Coco-Notes (also published by CBS Software[7]), the player is stranded on Coco-Note Isle where he must fish for musical notes in the form of coconuts[8][unreliable source?] and tunes in the form of fish. The player may then use these notes and tunes to create melodies in a free form manner. The game also features a quiz minigame where The Jazz Scats (a group of castaway hipsters) perform the first half of a jazz song and the player must then complete the song before Mr. Cool Clam (a square note-eating clam) eats the song.[5]

Movie Musical Madness is a 1-player[9][unreliable source?] music management game in which the player takes the role of a musical film director as he attempts to create an appropriate score for, select an appropriate plot for, and direct the actions of his group of actors, The Jazz Scats. The Jazz Scats (a group of bearded actors[10][unreliable source?]) can be set to perform in dozens of scenes ranging from city scenes to jungle scenes to outer-space scenes.[5]