A video game arcade cabinet, also known as a video arcade machine or video coin-op, is the housing within which a video arcade game's hardware resides. Most cabinets designed since the mid-1980s conform to the JAMMA wiring standard. Some include additional connectors for features not included in the standard.

Parts of an arcade cabinet

Note: Because arcade cabinets vary according to the games they were built for or contain, they may well not possess all of the parts listed below:

The sides of the arcade cabinet are usually decorated with brightly colored stickers or paint, representing the gameplay of their particular game.

There are many types of arcade cabinets, some in fact being custom-made for a particular game; however, the most common are the upright, the cocktail or table, and the sit-down.

Upright cabinets are by far the most common in North America. They are usually made of wood and metal, about six feet or two meters tall, with the control panel set perpendicular to the monitor at slightly above waist level. The monitor is housed inside the cabinet, at approximately eye level. The marquee is above it, and often overhangs it.

Controls are most commonly a joystick for as many players as the game allows, plus action buttons and "player" buttons which serve the same purpose as the start button on console gamepads. Trackballs are sometimes used instead of joysticks, especially in games from the early 1980s, spinners are used to control horizontally the action on screen, such as Arkanoid and Pong. Games such as Robotron: 2084, Smash TV and Battlezone use double joysticks instead of action buttons.

If an upright is housing a driving game, it may have a steering wheel and throttle pedal instead of a joystick and buttons. If the upright is housing a shooting game, it may have light guns attached to the front of the machine, via durable cables. Some uprights for shooting games have their monitors set a few feet further than usual, in order to make the game more challenging. 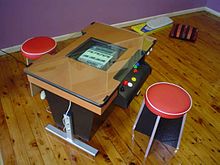 A cocktail cabinet. This style is sometimes referred to as Japanese or Aussie style.

Cocktail cabinets are shaped like low, rectangular tables, with the controls usually set at either of the broad ends, or, not as common, at the narrow ends, and the monitor inside the table, the screen facing upward. Two-player games housed in cocktails were usually alternant, each player taking turns. The monitor reverses its orientation for each player, so that everything seems right-side-up from each perspective. This requires special programming of the cocktail versions of the game (usually set by dip switches). The monitor's orientation is usually in player two's favor only in two-player games when it's player two's turn, and in player one's favor all other times. Simultaneous, 4 player games that are built as a cocktail include Warlords, and others.

Cocktail cabinet versions were usually released alongside the upright version of the same game. They were relatively common in the 1980s, especially during the Golden Age of Arcade Games, but have since lost popularity. Their main advantage over upright cabinets was their smaller size, making them less obtrusive. The top of the table was covered with a piece of tempered glass, making it convenient to set drinks on (hence the name), and they were often seen in bars.

Owing to the resemblance of the plastic to hard candy, they are often known as "candy cabinets", by both arcade enthusiasts and industry. They are also generally less heavy and easier to clean than upright cabinets. They are positioned so that the player can sit down on a chair or stool and play for extended lengths. SNK sold many Neo-Geo MVS cabinets in this configuration, though most arcade games made in Japan that only use a joystick and buttons will come in a sit-down cabinet variety. In Japanese arcades, this type of cabinet is generally more prevalent than the upright kind, and they are usually lined up in uniform-looking rows. A variant of this, often referred to as "versus-style" cabinets are designed to look like two cabinets facing each other, with two monitors and separate controls allowing two players to fight each other without having to share the same monitor and control area. Some newer cabinets can emulate these "versus-style" cabinets through networking.

Most commonly used for games involving gambling, long stints of gaming, or vehicles, such as fighting games, flight simulators, and racing games. These cabinets typically have equipment resembling the controls of a vehicle (though some of them are merely large cabinets with fair features such as a great screen or chairs). Driving games may have a bucket seat, foot pedals, a stick shift, and even an ignition, while flight simulators may have a flight yoke or joystick, and motorcycle games handle bars and a seat shaped like a full-size bike. Often, these cabinets are arranged side-by-side, to allow players to compete together. Some of these cabinets are very elaborate, and include hydraulics which move the player according to the action on screen. Sega is among the biggest manufacturers of these kinds of cabinets.

These are close relatives to deluxe cabinets except the player sits inside the game itself. Examples of this can be seen on the Killer List of Videogames for games such as Star Wars, Sinistar or Discs of Tron.

The mini or cabaret is a squatter version of the upright cabinet. It may also have a smaller monitor. Mini cabinets spare bulk and are easier for small children to play than some full-size cabinets.

Countertop or bartop cabinets are not much greatter than necessary to house their monitors and control panels. They are often used for trivia and gambling-type games, and are usually found installed on bars or tables in pubs and restaurants. These cabinets often have touchscreen controls instead of traditional push-button controls.

Of course, hobbyists prefer cabinets with original artwork in the best possible condition. Since machines with good quality art are hard to find, one of the first tasks is stripping any old artwork or paint from the cabinet. This is done with conventional chemical paint strippers or by sanding (preferences vary). Normally artwork cannot be preserved that has been painted over and is removed with any covering paint. New paint can be applied in any manner preferred (roller, brush, spray). Paint used is often just conventional paint with a finish matching the cabinet's original paint.

Many games had artwork which was silkscreened directly on the cabinets. Others used large decals for the side art. Some manufacturers produce replication artwork for popular classic games—each varying in quality. This side art can be applied over the new paint after it has dried. These appliques can be very large and must be carefully applied to avoid bubbles or wrinkles from developing. Spraying the surface with a slightly soapy water solution allows the artwork to be quickly repositioned if wrinkles or bubbles develop like in window tinting applications.

Acquiring these pieces is harder than installing them. Many hobbyists trade these items via newsgroups or sites such as eBay (the same is true for side art). As with side art, some replication art shops also produce replication artwork for these pieces that is indistinguishable from original. Some even surpass the originals in quality. Once these pieces are acquired, they usually snap right into place.

If the controls are worn and need replacing, if the game is popular, they can be easily obtained. Rarer game controls are harder to come by, but some shops stock replacement controls for classic arcade games. Some shops manufacture controls that are more robust than originals and fit a variety of machines. Installing them takes some experimentation for novices, but are usually not too difficult to place.

Raster monitors are easier to service than vector monitors. Normally, unless the main tube is blown, a raster monitor will provide good display characteristics with perhaps a few minor color adjustments. Vector monitors, on the other hand, can be challenging or very costly to service, and some can't be repaired at all (they have dwindled in use since the 80s and parts are hard to come by). Sometimes they will have to be replaced completely, but even finding replacement monitors is difficult since few, if any, are produced any longer. Bare new CRTs are still available from some suppliers (vector monitors use the same basic tube as a raster, just with different electronics), but as they are bare tubes they usually require the yoke to be removed from the old tube and fitted to the new tube and setting up, which isn't usually a job that can be undertaken by the amateur arcade collector. Retrofitting other monitor technologies to emulate vector graphics can also be done.

Some electronic components are stressed by the hot, cramped conditions inside a cabinet. Electrolytic capacitors dry out over time, and in many classic arcade cabinets their service life is nearing the end. If a game has its original raster monitor, it will usually need to be "re-capped"—that is, some capacitors will need to be replaced so the monitor will deliver a proper image. Due to the size of the capacitors and the voltages present inside a video monitor, this can be a dangerous activity and should only be attempted by experienced hobbyists or professionals. If a monitor is broken, a replacement can usually be obtained via coin-op distributors or parts suppliers.

If a cabinet needs rewiring, some wiring kits are available over the Internet. An experienced hobbyist can usually solve most wiring problems through trial and error.

Many cabinets are converted to be used to host a game other than the original. In these cases, if both games conform to the JAMMA standard, the process is simple. Other conversions can be more difficult, but some manufacturers such as Nintendo have produced kits to ease the conversion process (Nintendo manufactured kits to convert a cabinet from Classic wiring to VS. wiring).

Some cabinets are constructed entirely by hobbyists to mimic an arcade cabinet using emulators such as MAME and a PC to replace the game hardware. These home built cabinets have many of the features of real arcade cabinets (such as a coin box, marquees etc.). MAME arcade units can combine several arcade controls (such as two types of joysticks and a trackball) in one unit to enable play of many different games.[citation needed]

At least one company manufactures flat-pack style cabinet kits made from Medium-density fibreboard. These remove the need for the hobbyist to cut to shape large panels of the material, but still require assembly, painting and finishing; and fitting out with a game-system, controls and display.[1]

Bespoke arcade cabinets can also be custom built to order, allowing the hobbyist to design the cabinet removing the manual skills necessary for putting a cabinet together.[2]