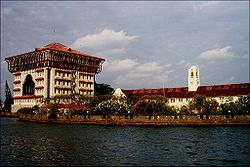 The office of the Cochin Port Trust in Willingdon Island

The Port of Kochi (officially the Cochin Port) is a major port on the Arabian sea - Indian Ocean sea-route and is one of the largest ports in India. The port lies on two islands in the Lake of Kochi namely the Willingdon Island and Vallarpadam, towards the Fort Kochi river-mouth opening onto the Arabian sea. The Vallarpadam International Container Trans-shipment Terminal (ICTT), a part of the Cochin Port, is the largest container trans-shipment facility in India.

The port is governed by the Cochin Port Trust, a Government of India establishment. The modern port was established in 1926 and has now completed 86 years of active service.

The Kochi Port is one among a line of maritime-related facilities based in the port-city of Kochi, the others being, the Cochin Shipyard, the largest ship-building as well as maintenance facility in India, the SPM (Single Point Mooring facility) of the Kochi Refineries - an offshore crude carrier mooring facility, and the Kochi Marina.

The Cochin port was formed naturally due the great floods of Periyar in 1341 AD, which choked the Muziris port (Kodungallur), one of the greatest ports in ancient world. Ever since the choking of Muziris, Cochin became one of the major ports with extensive trading relations Romans, Greeks and Arabs, all lured by the traditional spice wealth of the state. The port further attracted European colonialists like Portuguese, Dutch and finally British who extended their supremacy over Kochi Kingdom and the port city of Fort Kochi. The traditional port was located near Mattancherry (which still continues as Mattancherry Wharf).

The need of a modern port was first felt by Lord Willingdon during his Governorship of Madras Province of British India. The opening of Suez Canal, made several ships passing near west coast of India and he felt a necessity of modern port in the southern part. For this reason, he selected the newly joined Sir Robert Bristow[2] who was a leading British Harbor Engineer with extensive past experience with maintenance of Suez Canal. Sir Robert Bristow, took the charge of Chief Engineer of Kochi Kingdom's Port Department in 1920. Ever since then, he and his team was actively involved in making a greenfield port. After studying the sea currents, observing tidal conditions and conducting various experiments he was convinced about the feasibility of developing Cochin. He believed that Cochin could become the safest harbour if the ships entered the inner channel. The challenge before the Engineers who had studied the Port was a rock like sand bar that stood across the opening of the Cochin backwaters into the sea. It was a formidable ridge of heavy and densely packed sand that prevented the entry of all ships requiring more than eight or nine feet of water. It was thought that the removal of sand bar was a technical impossibility, that. the extent of the potential consequence on the environment was beyond estimation. The harm could be anything like the destruction of Vypeen foreshore or the destruction of the Vembanad lake.

Robert Bristow, after a detailed study, concluded that such data was history. He addressed the immediate problem of erosion of the Vypeen foreshore by building of rubble granite groynes nearly parallel with the shores and overlapping each other. The groynes first produced an automatic reclamation which naturally protected the shore from the monsoon seas. Confident at the initial success, Bristow planned out a detailed proposal of reclaiming part of the backwaters at a cost of Rs. 2.5 crores. An ad-hoc committee appointed by the Madras government examined and approved the plans submitted by Robert Bristow.

The construction of the dredger `Lord Willingdon' was completed in 1925. It arrived at Cochin in May 1926. It was estimated that the dredger had to be put to use for at least 20 hours a day for the next two years. . The dredged sand was used to create a new island to house Cochin Port and other trade related establishments. Around 3.2 km² of land was reclaimed during the dredging process. The strong determination of Sir Bristow and his team, finally paid success, when large steam ship SS Padma, sailed into sailing from newly constructed inner harbour of Kochi. Speaking to the BBC on that day, Bristow proudly proclaimed his achievements at the Kochi port with the following words: I live on a large Island made from the bottom of the sea. It is called Willingdon Island, after the present Viceroy of India. From the upper floor of my house, I look down on the finest harbour in the East..

Cochin Port Trust[3] is an Autonomous Body under Govt.of India and is managed by Board of Trustees constituted by the Government of India. The Board is headed by the Chairman who acts as the Chief Executive Officer. The Govt.of India may from time to time nominate the trustees in the Board representing various interests. Chairman is assisted by the Deputy Chairman who in turn is assisted by Department Heads and officials of the following departments functioning in the Port.

The entrance to Port is through the Cochin Gut between the peninsular headland Vypeen and Fort Cochin. The port limits extend up to the entire backwaters and the connecting creeks and channels. The approach channel up to the Cochin Gut, is about 1000 metre long with a designed width of 200 meters and maintained dredged depth of 13.8 meters (now dredging for 18 meters for ICTT).

From the gut the channel divides into Mattancherry channel and Ernakulam Channel, leading to west and east of Willingdon Island respectively and berthing facilities for ships have been provided in the form of wharves, berths, jetties and stream moorings alongside these channels.

A draft of 38 ft. is maintained in the Ernakulam channel along with berthing facilities, which enables the Port to bring in larger vessels to the Port. In the Mattancherry channel a draft of 30 ft. is maintained. The Port provides round the clock pilotage to ships subject to certain restrictions on the size and draft of the vessels. There is an efficient network of railways, roads, waterways and airways, connecting the Port with the hinterland centers spread over the State of Kerala, Tamilnadu and Karnataka. Facilities for supply of water and bunkering to vessels are also available.

The CPT launched E-Thuramukham, a comprehensive Enterprise Resource Planning (ERP) implementation programme becoming the first Indian port to do so. The project is based on SAP platform and will be customized by Tata Consultancy Services.