Møre og Romsdal (help·info) is a county in the northernmost part of Western Norway. It borders the counties of Sør-Trøndelag, Oppland and Sogn og Fjordane. The county administration is located in Molde, while Ålesund is the largest city.

For the meanings of the names see Diocese of Møre and Romsdal.

The coat-of-arms is from 1978. It shows three Viking ships (where the masts and the yards creates three crosses). The number of three represents the three districts of the county: Sunnmøre, Romsdal and Nordmøre.

Ragnvald Eysteinsson, earl of Møre until 890 and the founder of the Earldom of Orkney. Ragnvald might also have been the father of Rollo of Normandy.

Traditionally, the county has been divided into three districts. From north to south, these are Nordmøre, Romsdal and Sunnmøre. Although the districts do not have separate governments and despite modern road, sea and air connections throughout the county, the three districts still have their own identities in many ways. Historically speaking, connections have been stronger between Nordmøre and Sør-Trøndelag to the north, Romsdal and Oppland to the east, and Sunnmøre and Sogn og Fjordane to the south, than internally. Differences in dialects between the three districts bear clear evidence of this. Due to geographical features, the county has many populated islands and is intersected by several deep fjords. Due to its difficult terrain, Møre og Romsdal has been very dependent on boat traffic, and its main car ferry company, MRF, has existed since 1921.

Møre og Romsdal has six settlements with city status. The largest three were cities before 1993 when municipalities were allowed to grant city status which led to an increase in the number of cities. The county contains multiple other urban settlements (as defined by Statistics Norway) without city status, every municipality except for Halsa and Smøla containing at least one. As of 1 January 2009, 166,374 people (66.8 percent of the population) lived in an urban settlement.[4] The population density is highest near the coast, with all of the county's cities located on saltwater.

The largest city in the county is Ålesund, with a population of 42,317 in the municipality and 46,471 in the agglomeration which it forms together with parts of Sula. 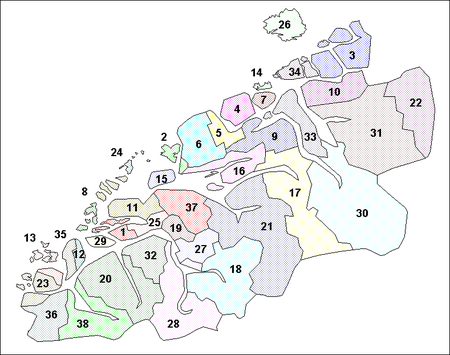 Møre og Romsdal has a total of 36 municipalities: