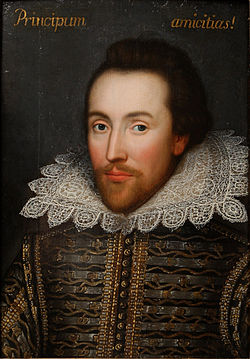 The Cobbe portrait is an early Jacobean panel painting of a gentleman which has been argued to be a life portrait of William Shakespeare. It is displayed at Hatchlands Park in Surrey, a National Trust property, and the portrait is so-called because of its historical ownership by Archbishop Charles Cobbe (1686-1765). There are numerous early copies of the painting, most of which were once identified as Shakespeare. The Cobbe original was only identified in the collection of the Anglo-Irish Cobbe family in 2006, and had until then been completely unknown to the world. Evidence uncovered by researchers at the Shakespeare Birthplace Trust led to the claim, presented in March 2009, that the portrait is of William Shakespeare and painted from life.[1] The portrait has been the centrepiece of two dedicated exhibitions: Shakespeare Found: a Life Portrait at the Shakespeare Birthplace Trust, Stratford-upon-Avon, from April-October 2009 and The Changing Face of William Shakespeare at the Morgan Library and Museum, New York, from February-May 2011. Support for the identification is drawn from several strands of evidence:

3) The Cobbe portrait is inscribed with the words 'Principum amicitias!', meaning 'the alliances of princes!', a quotation from Horace in an ode addressed to a man who was, among other things, a playwright (see below).

4) The Cobbe portrait bears a compositional similarity with the Droeshout engraving published in the First Folio of 1623, and may have been the source for it.

5) Scientific examination has shown that the portrait is painted on a panel of English oak sometime after 1595; the form of the collar suggests a painting date of around 1610.

The identification has received support from Shakespeare scholars Stanley Wells, Henry Woudhuysen, Jay L. Halio, Stuart Sillars, and Gregory Doran, Chief Associate Director of the Royal Shakespeare Company, and art historians Alastair Laing, curator of paintings and sculpture at the British National Trust, and Paul Joannides, Professor of Art History at Cambridge. The claims about the portrait have also met with considerable scepticism from other Shakespeareans and art experts, including Shakespeare scholar David Scott Kastan, who has questioned the portrait's provenance, and Dr. Tarnya Cooper, curator of 16th-century portraits at the National Portrait Gallery, who believes that both the Cobbe and Janssen portraits represent Sir Thomas Overbury. Other scholars have noted numerous differences between the Cobbe portrait and the authentic but posthumous Martin Droeshout engraving that appeared in the First Folio of Shakespeare's works.[2]

Supporters of the Shakespeare identification reject the arguments for Overbury. Research using tracings by Rupert Featherstone at the Hamilton Kerr Institute, University of Cambridge, has led him to conclude that the Cobbe portrait and the only documented portrait of Overbury in the Bodleian Library, Oxford, depict two different sitters. 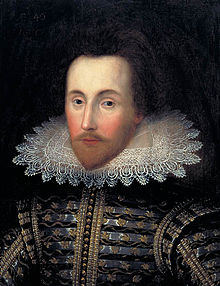 The Janssen portrait after 1988 restoration. 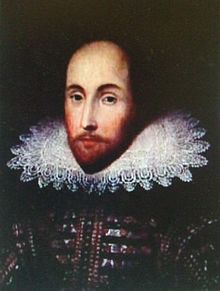 The altered balding hairline in the "original" Janssen portrait, as it appeared when purchased by the Folger Shakespeare Library in the early 1930s.

Since the publicity surrounding it, the portrait has appeared on the covers of several books, has been made into a pub sign at 'The Shakespeare' in Wells-upon-Avon[citation needed], and has even inspired the Chinese author Zhang Yiyi to have a series of cosmetic surgeries to have his face transformed into that of Shakespeare.[3]

The subject of the portrait was unidentified for centuries after passing into the ownership of the Cobbe family some time in the early 18th century.

In 2006, Alec Cobbe viewed the "Janssen portrait", so-called because it was once attributed to the artist Cornelis Janssen. It belongs to Washington's Folger Shakespeare Library, and was on exhibition in London's National Portrait Gallery; it bore a striking resemblance to the one owned by his family. The Janssen painting had long been claimed to be Shakespeare; however, when overpainting was removed in 1988, it was discovered that the hairline had been altered, apparently to make it look more like the standard engraved Droeshout image of Shakespeare with a high, balding forehead.[4] Shakespeare's age and date had also been added at some later time.

In the exhibition catalogue the "Janssen portrait" was tentatively identified as a depiction of the courtier, poet and essayist Thomas Overbury. This suggestion dates back to an earlier exhibition in 1964, before the cleaning.[5] Nevertheless the catalogue asserted that this was simply a guess.[6]

Cobbe sought advice from the Shakespeare Birthplace Trust. Over a three-year period, a research project headed by Stanley Wells and Alastair Laing, performed a number of authentication studies on the portrait. Wells and Laing concluded that sufficient circumstantial evidence exists to announce the project's findings. They also suggested that the "Janssen portrait" was a copy of the Cobbe portrait. According to the Shakespeare Birthplace Trust, "several other early copies of the Cobbe portrait have been located and no less than three of them have independent traditions as portraits of Shakespeare."[7] The full evidence was published in the catalogue of the 2009 exhibition Shakespeare Found in Stratford-upon-Avon.[7]

In 2006, the National Portrait Gallery concluded that the so-called Chandos portrait was then the only existing portrait painted during the life of Shakespeare.[8] If verified, the Cobbe portrait would become the second portrait of William Shakespeare possibly painted from life.

After extensive infra-red and x-ray test analysis including growth-ring testing of the panel on which the portrait is painted, scientists have estimated that the panel is from around 1610.[9] According to Stanley Wells the portrait has been in the possession of the Cobbe family since the early 18th century and is most likely a portrait of Shakespeare, and possibly the source of Martin Droeshout's familiar engraving on the title page of the Shakespeare First Folio (1623). The portrait is thought to have been commissioned by Shakespeare's patron, Henry Wriothesley, 3rd Earl of Southampton.[10][11][12] Wells said:

"The evidence that it represents Shakespeare and that it was done from life, though it is circumstantial, is in my view overwhelming. I feel in little doubt that this is a portrait of Shakespeare, done from life and commissioned by the Earl of Southampton."

However, other experts are more sceptical, and suggest that even the circumstantial evidence is weak. Shakespeare scholar David Scott Kastan took the view that there were reasons to question the Cobbe portrait’s provenance — whether it was in fact once owned by the Earl of Southampton or commissioned by him, as the trust representatives believe — and to doubt whether the richly dressed man in the portrait was Shakespeare. 'If I had to bet I would say it’s not Shakespeare,' Mr. Kastan said. But even if it was, he said, the traditions of Elizabethan portraiture meant that it would be unwise to conclude that Shakespeare actually looked like the figure depicted in the portrait. 'It might be a portrait of Shakespeare, but not a likeness, because the conventions of portraiture at the time were often to idealize the subject,' he said."[13]

Dr. Tarnya Cooper, curator of 16th century portraits at the National Portrait Gallery, also voiced scepticism. While acknowledging that the Janssen portrait and the Cobbe portrait are versions of the same image, she believes it likely that both portraits represent Sir Thomas Overbury. Of Wells's identification of the sitter as Shakespeare, she said

I respect Wells's scholarship enormously, but portraiture is a very different area, and this doesn't add up.[14]

This portrait of Sir Thomas Overbury, bequeathed to the Bodleian Library in 1740, has been suggested as the source of the smaller Cobbe or Janssen portraits.

An authentic portrait of Sir Thomas Overbury (1581–1613) was bequeathed to the Bodleian Library in Oxford in 1740. This picture bears a startling resemblance to the “Cobbe” painting (and its companions). Features such as a distinctive bushy hairline, and a slightly malformed left ear that may once have borne the weight of a jewelled earring, appear identical. Even the man’s beautifully intricate lace collar, though not identical in pattern, shares overall design with “Cobbe”, having square rather than rounded corners.

Writing in the Frankfurter Rundschau, Hildegard Hammerschmidt-Hummel, author of a book on Shakespeare’s portraiture,[16] concluded that the Cobbe portrait cannot be an authentic likeness of Shakespeare.[17] In this article she also noted the view of Eberhard J. Nikitsch, a specialist in inscriptions, who found that the inscription of the Cobbe painting lacked the scripts commonly used in early 17th-century portraits, and that it must have been added later.[18]

Wells and his colleagues have responded to the criticisms, arguing that David Piper's original 1964 identification of the Janssen as Overbury was based on the misreading of an inventory. They also assert that the hairline was altered before 1630, because another copy of that date already showed the balding forehead. They counter Duncan-Jones's argument that the costume is too aristocratic for Shakespeare by comparing it to that worn by Shakespeare's colleague and collaborator John Fletcher in a portrait of the period.[19]

The portrait includes the Latin legend Principum amicitias! ("The Friendships of Princes!") painted above the sitter's head. This is speculated [20][21] to be quoted from Horace's Odes, book 2, ode 1 (below), where the words are addressed to Asinius Pollio, who, among other things, was a poet and playwright. In Horace's context they form part of a sentence meaning "beware the alliances of princes."[21] The word for "beware" (or danger[ous]) is not, however present in the inscription, so it literally translates as "friendships of Princes". The fact that the word "friendships" appears in the accusative case in the inscription (rather than in the nominative, as one would expect if it were to stand alone), underscores the fact that the inscription was meant to allude to the passage in Horace 2.1. 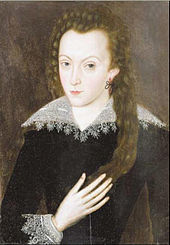 The Cobbe portrait of Southampton

The claims regarding this portrait follow from research into another portrait in the Cobbe collection, also displayed at Hatchlands Park, which came to public attention in 2002 when the painting, which for three centuries had been identified as a portrait of a woman, 'Lady Norton', was correctly identified as a portrait of a young man. The coincidence of distinctive features, the extraordinarily long hair, the high forehead, the long nose terminating in a bulb and the slender upper lip with known portraits of the 3rd Earl of Southampton, led to the conclusion that it depicted Shakespeare's patron the 3rd Earl of Southampton himself, whose great-granddaughter was Lady Elizabeth Norton.[23] The portrait is the earliest extant oil portrait of the androgynous-looking youthful Earl to survive and shows him at the time that Shakespeare dedicated his long poems Venus and Adonis (1593) and The Rape of Lucrece (1594) to him. The Earl has often been suggested as the "Fair Youth" who is the love object in some of Shakespeare's Sonnets. Alastair Laing of the National Trust wrote at the time that, 'I am very happy indeed about the identification. Given the connection to Shakespeare and his sonnets, it is a very, very exciting discovery.'[23]