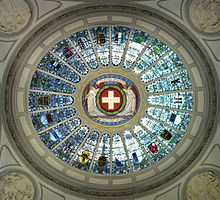 Ten cantonal war flags carried in the Battle of Nancy (1477) in the depiction of the Luzerner Chronik of 1513. All flags of the Eight Cantons are shown, but the flags of Berne and Uri omit the heraldic animal, showing only the cantonal colours. In addition, the flags of Fribourg and Solothurn are shown, at the time not yet full members, who would join the confederacy in the aftermath of this battle. Each flag has the confederate cross attached.

There are 26 modern cantons of Switzerland, each of which has an official flag and coat of arms. The history of development of these designs spans the 13th to 20th centuries. Historically, the number of cantons was

Nidwalden and Obwalden are traditional subdivisions of Unterwalden. Basel-Stadt, Basel-Landschaft as well as Appenzell Inner- and Ausserrhoden are half cantons, resulting from the division of Basel and Appenzell, respectively. With the Swiss Federal Constitution of 1999, "half-canton" has ceased to be an official designation, so that the official number of cantons is now 26, the former half-cantons being now referred to as "cantons with half a cantonal vote" officially, even though they are still commonly referred to as half-cantons.

With the exception of Lucerne, Schwyz and Ticino, the cantonal coats of arms are simply arrangements of the cantonal flags in a shield shape. This fashion originates in the 15th century and became commonplace in symbolic depictions of the confederacy during the Early Modern period.

Of the 22 cantonal coats of arms as they stood with the creation of Switzerland as a federal state in 1848, six are simple bicolor designs. Vaud also has a bicolor, but (against heraldic tradition) an added inscription. The remaining 15 flags include heraldic designs, as follows:

See the List below for the histories of the individual designs.

The coats of arms of the Thirteen Cantons are based on medieval signs, originating as war flags and as emblems used on seals. For war flags, a distinction was made between Banner and Fähnlein, the former was the large war flag used only in the case of a full levy of cantonal troops for a major operation. The latter was a smaller flag used for minor military expeditions. The Banner was considered a sacred possession, usually kept in a church. Losing the banner to an enemy force was a great shame and invited mockery from other cantons.

The fashion of arranging them in shields (escutcheons) as coats of arms arises in the late 15th century.

The Tagsatzung in Baden was presented with stained glass representations of all cantons in ca. 1501. In these designs, two cantonal escutcheons were shown side by side, below a shield bearing the Imperial Eagle and a crown, flanked by two banner-bearers.

Based on these, there arose a tradition of representing cantonal arms in stained glass (Standesscheiben), alive throughout the early modern period and continued in the modern state.