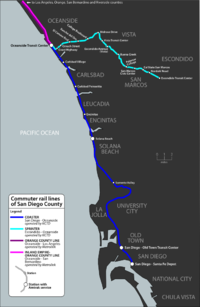 San Diego Northern Railway (SDNR) purchased the tracks used by Coaster from the Atchison, Topeka and Santa Fe Railway in 1994. NCTD created the subsidiary San Diego Northern Railway Corporation in 1994 and dissolved it in 2002.[1] Revenue Coaster service began February 27, 1995. Money for right-of-way acquisition and construction costs came from TransNet, a 1987 measure that imposed a 0.5% sales tax on San Diego County residents for transportation projects. NCTD originally contracted Amtrak to provide personnel for Coaster trains. On July 1, 2006, TransitAmerica took over the day-to-day operation of the commuter train, based on a five-year, USD 45 million contract with SDNR. TransitAmerica is a subsidiary of Missouri-based Herzog Transit Services.

The Coaster carried 700,000 passengers during its first year of operation. By 2004, it was carrying 1.4 million passengers annually. Approximately 40% of weekday commuters detrain at Sorrento Valley. NCTD owns 62 mi (100 km) of mainline track, as well as the 22 mi (35 km) Escondido Branch that is served by the Sprinter, which began service in March 2008. The Coaster commuter train runs on 41.1 mi (66.1 km) of the mainline.

NCTD maintains two rail yards. One is shared with the San Diego Trolley at 12th & Imperial in Centre City San Diego. It is used to store train-sets during the midday. The other, located north of Oceanside at Stuart Mesa on Camp Pendleton, is shared with Metrolink. This is where the main maintenance facility is located.

Consumption of alcoholic beverages is allowed on board the Coaster for riders who are of the legal drinking age.[2]

All Coaster trains start from the Stuart Mesa Coaster Yard, where all of the trains are kept overnight and repaired, just north of the Oceanside Transit Center, the northern terminus of Coaster trains. The train goes over the famed steel bridge that crosses the San Luis Rey River and then goes under the I-5 freeway. The train turns toward the ocean and passes Fallbrook Junction. The train passes a small yard, not used anymore, and then heads for the town of Oceanside. At Oceanside, the train is then in service. The train picks up passengers in Oceanside, its first stop.

The trains leaves Oceanside and passes through a few crossings south of the station. The Sprinter tracks that run next to the Coaster tracks curve inland, as the train passes a wye. It passes CP Longboard, and curves away from the Pacific Ocean. The train then crosses Buena Vista Lagoon, and then shortly after, stops at the Carlsbad Village Stop, the trains 2nd stop.

After leaving Carlsbad Village, the train rolls through a straight section of track with three more crossings, in the quaint town of Carlsbad. It then crosses Agua Hedionda Lagoon. The train passes by a power plant with a spur rail, that is not used anymore, and crosses Cannon Rd., at high speeds, then through and through CP Farr, on approach to Carlsbad Poinsettia station stop. The train passes by some houses, and a water treatment plant, and then stops at the Carlsbad Poinsettia Station. It stops at Poinsettia and then rolls on south past CP Ponto.

After picking up or dropping passengers off at Poinsettia, the Coaster train crosses the Batiquitos Lagoon, with a view of the Pacific Ocean, and then travels under and bridge. The train is now in Leucadia, just north of Encinitas. At high speeds, the train blasts through a grade crossing, and then stops at the Encinitas Coaster station.

After leaving Solana Beach, the train passes CP Valley, crosses a lagoon, past the famed Del Mar Race Track, and then rolls through a short siding in Del Mar with CP Crosby on the north end and CP Del Mar on the south end. It passes the abandoned Del Mar Surf Station and then passes another crossing. After travelling on the Del Mar Cliffs, beside the Pacific Ocean, it heads inland. The train rolls through the Soledad Lagoon, and then behind some office buildings in Sorrento Valley. The train then rolls through CP Torrey, stops at Sorrento Valley. 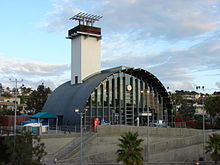 The Coaster and Amtrak station at Solana Beach.

After the stop the train passes a grade crossing and rolls past CP Pines. It then travels through Mirimar hill that's full of sharp curves. Trains are limited to 25 MPH here. At the top of the hill, the train passes CP Cumbres and the Miramar Wye, and then races down a long siding on the straighter south side of Miramar Hill. It then slows as it reaches CP Elvira. After passing through Rose Canyon, the train starts to pick up speed as it approaches CP Morena. It continues traveling at high speed through CP Tecolote and then slows as it approaches CP Friar and stops at Old Town.

After stopping at Old Town, it passes through several crossings before passing through CP Ash and arriving at Santa Fe Depot. The train is then out of service. On Weekday and morning trains, the Coaster train can also go to a small storage yard for the day beside the San Diego Trolley yard and the SDIV yard, next to Petco Park.

The cost of Coaster tickets is based upon the number of zones traveled (see map). Tickets must be purchased before boarding, and will occasionally be checked by roving fare inspectors (often between the Solana Beach and Sorrento Valley stations). Monthly passes are available. All tickets and passes include transfer agreements with regular NCTD buses (the "Breeze") and monthly passes include transfer with the Metropolitan Transit System (MTS) buses and Trolleys. As of January 20, 2011, regular one-way fares are as follows:[4]

With proof of eligibility, senior citizens (ages 60 and over), people with disabilities, and Medicare cardholders receive a 50% discount on the above fares.

While tickets are not checked on all trips, penalties for riding the Coaster without a valid ticket include a penalty fare of up to $250. Riders cannot purchase tickets on board the train. Monthly passes are available for between $120.00 to $165.00. With proof of eligibility, youth (ages 6–18) monthly passes are $82.50, while senior, disabled and Medicare monthly passes are $41.25.

Coaster runs thirteen daily southbound trains (Oceanside to San Diego) and thirteen northbound (San Diego to Oceanside) weekdays, Monday to Friday. Three Coaster trains, the morning trains, then are stored in the MTS Trolley yard, just south of the main San Diego Depot. In the afternoons, the trains come back to the station, load, and then continue on its normal route. On Friday and Saturday nights, Coaster operated an additional four trains to accommodate Friday night crowds during the summer months. Coaster stops this service when the Fall timetable switches.

Saturdays have limited service, with six southbound and six northbound trains in the summertime. In time Fall and the Winter, the weekend Saturday trains go down to 4 trips Southbound, and also 4 trips Northbound. On April 4, 2011, Coaster introduced a limited 4-roundtrip Sunday/holiday service during the summer season. This then was extended to be year round. Special service to Padres games is available in the summertime. Special Service for Special Events, such as the Carlsbad Street Fair, also have more trains running on the weekend.

In September 2008, SANDAG introduced a new contactless "Compass Card", made possible by Cubic Transportation Systems, Inc.. The "Compass Card" allows passengers from MTS and NCTD to store regional transit passes and cash value on a rewritable RFID card. Customers can purchase passes and add cash value on the Internet or at any ticket vending machine. When a customer boards a bus they simply tap their Compass Card on the "Validator", usually located near or on the farebox. The LED display then lights up with lights resembling that of a stoplight, and the LCD display shows text regarding the passenger's fare account. When boarding rail vehicles the Validators are located on the platform, and the same process is performed to board the train. This program is still in the pilot testing phase, and SANDAG hopes to have all bus passengers using the Compass Card by the end of 2009.

Most trains run with 5 coaches. However, as of July 2008, a 6th coach has been added to half of the weekday trains due to an 8% jump in ridership from the previous year.

The Coaster connects with Amtrak at Oceanside, Solana Beach, and San Diego. It also connects with Metrolink at Oceanside. The Coaster connects to the San Diego Trolley and buses at Old Town and Santa Fe Depot in San Diego, including to the Lindbergh Field. The Sprinter line connects Oceanside, California to Escondido, California. Riders can use buses from the Sorrento Valley station to access employment centers in Sorrento Valley, Sorrento Mesa, Torrey Pines, and University City.[5] The VA Hospital, the University of California, San Diego, and some area employers also provide shuttle service to and from the Sorrento Valley station at peak times. NCTD provides "Breeze" bus service connecting with the Coaster at all North County station stops.

The Coaster remains stable for the foreseeable future. San Diego County voters extended the TransNet sales tax through 2038, which includes some funds for track upgrades. Plans to double track more of the NCTD-owned mainline are also being considered. There are also plans of extending Coaster service to Camp Pendleton and the Convention Center,[6] as well as interest in rebuilding the station at Del Mar to serve the racetrack and fairgrounds.[7]

The Coaster has 2 storage yards. The main storage yard is in Stuart Mesa, just north of the Oceanside station stop. This is where all of the cars are stored for the night, and where the trains get serviced. A small yard beside the San Diego Trolleys' yard is for staging of trains for the day, but only is used during the weekdays. Three trains are parked there during the day.