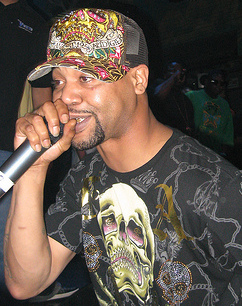 Terius Gray, known by his Juvenile, is an American rapper. At the age of 19, he began recording raps, releasing his debut album "" in 1994.

In 2003, he returned to Cash Money to record "", spawning the number-one hit "Slow Motion". In 2006, he was signed to , releasing his latest album "Reality Check" under that label.

After beginning his rap performing career in his teenage years, Juvenile released his first album "" in 1994, giving way to the southern "bounce" rap style, similar in nature to the sound that and were performing at the time. In 1997, "", Juvenile's debut with , became popular among underground rap audiences. Thus, Juvenile's next album "" was released in 1998 with joint distribution by , spawning his first single "Ha" and later "", both of which topped the and charts.

In 1999, capitalizing off Juvenile's popularity off "400 Degreez", a remixed version of "" and reissue of "" were released. Two more albums under Cash Money were released, "" in 1999 and "" in 2001. Juvenile left Cash Money Records in 2002 to join a new label . In the summer of that year, he was arrested for assaulting his over charges that the barber was bootlegging his music. [cite news|title=Rapper Juvenile Booked in Bootleg Dispute|url=http://www.wsbtv.com/entertainment/1672388/detail.html|publisher=|date=2002-09-17|accessdate=2008-02-06]

In 2005, Juvenile and his UTP crew went on to create the hit song "Nolia Clap", and Juvenile was able to use this as leverage in getting a new deal for himself and UTP at . In June of that year, he performed his song "Booty Language" from the soundtrack to the film "" at a party in . [cite news|last=Scorca|first=Shari|title=Lil Jon, T.I., Paul Wall Bring the Dirty South to the Sunset Strip|url=http://www.mtv.com/news/articles/1504898/20050628/juvenile.jhtml|work=|date=2005-06-28|accessdate=2008-02-14] However, Juvenile's home was damaged but not destroyed in near the end of the summer. In the aftermath of the hurricane, he worked with fellow New Orleans rapper and other hip hop artists to raise funds and supplies for the victims of the hurricane. [cite news|last=Moss|first=Corey|title=Juvenile, 3 Doors Down Among Those Affected By Disaster|url=http://www.mtv.com/news/articles/1509095/20050907/juvenile.jhtml|work=|date=2005-09-07|accessdate=2008-02-06] Thus, he moved to Atlanta to live until the spring of 2006, when he moved back to . [cite web|last=Takahashi|first=Corey|title=Rapper Juvenile Returns to New Orleans|url=http://www.npr.org/templates/story/story.php?storyId=5388518|publisher=|date=2006-05-06|accessdate=2008-02-06]

Juvenile had been set to return from a hiatus in 2008, but following the death of his daughter in February 2008, has taken further time off.Also, produced a track on 's upcoming album.

Juvenile was involved in a legal dispute regarding failure to pay child support for his daughter Jelani with Joy Deleston, a deputy sheriff in . A paternity lawsuit was issued by Deleston in 2004, resulting in a DNA test and both parties agreeing that Juvenile was the father of the child. Attorney Randy Kessler represented Juvenile in the case, and stated that the case was resolved peacefully by consent order in 2006. [cite news|title=Rapper Juvenile's Daughter Killed In Ga|url=http://abcnews.go.com/us/WireStory?id=4368717&page=1|work=|date=2008-03-01|accessdate=2008-08-16]

On , Juvenile's 4 year old daughter Jelani was shot and killed in her home, along with mother Deleston and two half sisters. It was reported that Deleston's oldest child, 17 year old son Anthony Tyrone Terrell Jr., returned to the home after police arrived and implicated himself in the murder of his mother and siblings. Terrell was charged with three counts of and three counts of . Due to his age, he can not be held to the in Georgia, and has since been held in the DeKalb County jail. Though Juvenile received some criticism for not attending the funeral for his daughter and her mother, several statements were released that the rapper was "shocked and devestated" by the event, and also "was extremely saddened to hear the reports. As a private matter he has no further comment". [cite news|title=Rapper Juvenile's Daughter Murdered|url=http://www.tmz.com/2008/02/29/rapper-juveniles-daughter-murdered/|work=|date=2008-02-29|accessdate=2008-08-16] The rapper stated that he made the decision to not appear at the funeral to prevent subsequent media attention, and was concerned that it would divert attention away from the ceremony. [cite news|title=Juvenile A No Show At Daughters' Funeral|url=http://www.tmz.com/2008/03/10/juvenile-a-no-show-at-daughters-funeral/|work=|date=2008-03-10|accessdate=2008-08-16] [cite news|title=Juvenile Skips Daughters' Funeral|url=http://www.vibe.com/news/news_headlines/2008/03/juvenile_daughter_funeral/|work=|date=2008-03-10|accessdate=2008-08-16]