The Eastern bearded dragon (Pogona barbata) is an agamid lizard found in wooded parts of Australia.[1] It is one of a group of species known commonly as Bearded Dragons. Other common names for this species include Jew Lizard and Frilly Lizard, the latter being a confusion between this and another dragon; the Frilled Lizard (Chlamydosaurus kingii).

It is most common in eastern Australia south of Cape York Peninsula, but specimens have been collected from Cape York, through central Australia, and even from the west coast of Australia. It is a large species of grey-black colour distinguished from its relative, the central bearded dragon, Pogona vitticeps, by its less robust body and the row of spines along the lateral edge of the body, which continues over the forearm (Cogger, 1992). It tends to be more cryptic in its behaviour than the Central bearded dragon and performs its bearded display more often. It has an adult snout-tail length of about 24 inches (60 cm). When threatened, in addition to its beard display, it gapes to display the bright yellow colour of the inside of its mouth. They eat small lizards and snakes, flowers, insects, fruits, and berries.

This species was previously known as Amphibolurus barbatus.[2]

The eastern bearded dragon resembles its close relative the smaller central bearded dragon. It is usually grey-black in skin colour and is sometimes reddish-brown, yellowish-brown, or dark brown. Juveniles are paler in colour than the adults and have patterns that fade as they mature. As it matures it develops a subtle pale yellow, blue, or green tinge on the forepart of its head. The adult males can grow up to about 24 inches (60 cm), and females up to 20 inches (50 cm). The adult males have a dark grey to black "beard". 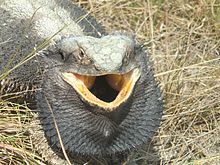 Eastern Bearded Dragons are diurnal. They are semi-arboreal and perch on exposed places such as tree branches or logs, retreating to lower and cooler places when too hot. The eastern bearded dragon is more aggressive than the central bearded dragon, demands more space and is less docile. The males are territorial and permit only females and juveniles in their territory. Dominant males are usually the biggest dragons and get the highest perch.

The eastern bearded dragon is also known to do the arm wave as a sign of submission or just for general communication.

When agitated or threatened, bearded dragons display their beard and gape. 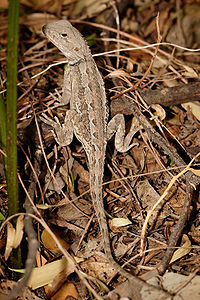 Juvenile eastern bearded dragon in the undergrowth of a blackberry bush. Note that the dark spot at the tip of the nose is the shadow of the same bush.

The eastern bearded dragon feeds on a variety of small vertebrates and invertebrates including crickets, small grasshoppers, worms, beetles, katydids, small mice, and small reptiles. In captivity they also eat a few vegetables. These include clover and dandelion flowers. 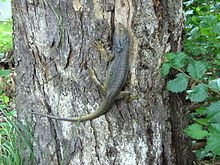 Yearling barbata found in a suburban yard in Canberra, Australian Capital Territory, and relocated to bushland about 100m away.