The Helicopter Interdiction Tactical Squadron (HITRON) is an armed U.S. Coast Guard helicopter squadron specializing in Airborne Use of Force (AUF) and drug-interdiction missions. It is based at Cecil Field in Jacksonville, Florida.[1]

HITRON flew armed Agusta MH-68A Stingray helicopters from December 2000[2] until February 2008. At that time, HITRON took on the mantle of the Atlantic Area Deployment Center, and began flying the MH-65C Dolphin.[3] Since its foundation in 1998 and formal commissioning, it has participated in over 150 separate go-fast boat interdictions.

A HITRON MH-65C fires warning shots across the bow of a simulated go-fast during an exercise.

When conducting counter drug operations, HITRON aircrews will deploy aboard Coast Guard cutters for thirty to sixty day deployments. While on deployment, go-fast boats are searched for not only by the HITRON helicopter but also by shore based maritime patrol aircraft (MPA) such as the Coast Guard HC-130J Hercules. If an MPA locates a go-fast, the HITRON crew will launch from the cutter to intercept it. The crew will approach the suspect vessel with weapons trained on the vessel for self-protection. The helicopter crew will confirm the nationality or lack of nation status and whether the vessel is in fact a suspect smuggling vessel. The aircrew will then attempt to convince the boat crew to stop through the use of sirens, loud speakers, visual hand signals, and radio communications in both English and Spanish. If the vessel stops during this phase, it will be boarded and searched by a boarding team from the cutter which accompanies the chase in an over-the-horizon pursuit boat and is vectored to the scene by the HITRON crew.[4] If the vessel is found to be carrying drugs, the boarding team will take appropriate law enforcement action.

If the suspect vessel fails to stop after numerous visual and verbal warnings, the helicopter crew will take up a firing position alongside the go-fast and the aerial gunner will fire warning shots across their bow with the mounted M240 machine gun to further compel them to stop. If the warning shots do not convince the suspects to stop, the gunner will attempt to disable the vessel by shooting out its engines with a .50 caliber precision rifle.[3] Go-fasts usually have multiple outboard engines and the gunner will continue to fire into these engines until the suspects stop or they are forced to stop. Once the vessel is stopped, it will be boarded by the over-the-Horizon boat's boarding team.[5][6] 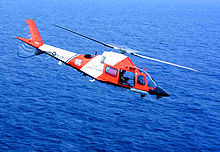 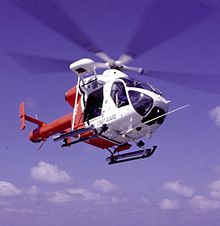 In 1998, the Coast Guard estimated that it was stopping less than ten percent of the illegal drugs entering the United States by sea. Spurred by these estimates, Admiral James Loy, the then Commandant, directed the Coast Guard to develop a plan to counter the go-fast boats used for smuggling drugs.

This gave rise to the Helicopter Interdiction Tactical Squadron. Starting in late 1998, Commander Mark 'Roscoe' Torres molded a group of ten volunteers into a cohesive and effective team, and in just seven months took ideas to reality as the squadron pioneered novel operating tactics and procedures. Flying leased MD900 and MD902 Enforcer helicopters the unit developed and evaluated tactics and procedures for day and night operations.[7]

During this early proof of concept phase, HITRON intercepted and stopped all five go-fasts they encountered, stopping 2,640 pounds (1,197 kg) of cocaine, and 7,000 pounds (3,175 kg) of marijuana with an estimated street value of over US$100 million, with all 17 suspects arrested. Due to their outstanding success during the test and evaluation stage, the HITRON program was validated and designated a permanent Coast Guard unit.[8] 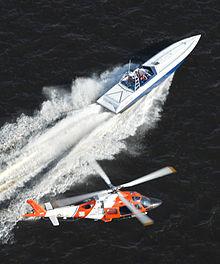 The unit originally flew leased MD 900 and MD 902 helicopters with the unofficial military designation of MH90 Enforcer. When the decision was made to make the squadron permanent and expand it to eight aircraft, Federal contracting laws required a competitive bid to choose a permanent aircraft for the mission.

In March 2000, Agusta was awarded the contract to provide eight A109E Power helicopters to replace the MH90 Enforcers that HITRON had been successfully flying. The Agusta A109E Power was given the military designation MH-68A Stingray.[9]

In 2008 the Coast Guard allowed the lease for the MH-68As to expire and replaced them with the first of the new MH-65C Dolphins. The MH-65C is an upgraded version of the HH-65B which includes, among other upgrades, new avionics and communications equipment and the ability to carry armament. While not as nimble as the MH-68A, the MH-65C is faster, has greater range and endurance, and provides a smoother ride, therefore allowing more accurate shooting. It also has the logistical advantage of being standardized throughout the Coast Guard.[10]

The squadron was originally armed with M16A2 rifles and mounted M240G machine guns for warning shots and self-protection. The bolt-action Robar RC-50 .50-caliber rifle was used for disabling fire. The RC-50 has been replaced by a variant of the semiautomatic Barrett M107 .50-caliber rifle with an anti-corrosion finish.[11] It is fitted with an EOTech holographic weapon sight and an Insight Technology laser sight. The M14 Tactical, a version of the standard M14 with a Sage Enhanced Battle Rifle stock and improved muzzle brake, is also used by the squadron.[12]