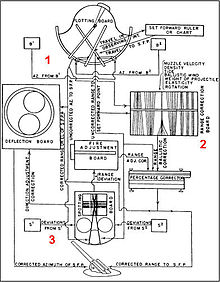 A conceptual diagram of the flow of fire control data in the Coast Artillery (in 1940). The set forward point of the target was generated by using the plotting board (1). This position was then corrected for factors affecting range and azimuth (2). Finally, fire was adjusted for observations of the actual fall of the shells (3), and new firing data were sent to the guns.

In the U.S. Coast Artillery,[1] the term fire control system was used to refer to the personnel, facilities, technology and procedures that were used to observe designated targets, estimate their positions, calculate firing data for guns directed to hit those targets, and assess the effectiveness of such fire, making corrections where necessary.[2]

In brief, the fire control system in use from about 1900 through WW2 involved observers, often situated in base end stations, using optical instruments (like azimuth telescopes or depression position finders) to measure bearings and/or distances to targets (usually moving ships).[3] Both horizontal and vertical base position finding systems were used. [4] These observations were communicated to personnel in battery plotting rooms, who used a mechanical device called a plotting board to indicate the target's observed location on a map of the area. The red "1" on the diagram at right indicates this first stage of the fire control process. 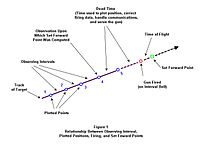 A series of observed positions (blue circles) establishes the likely track of the target. Using a plotting board, the set forward point is determined, based upon the target's observed course and speed and an assumption about when the gun is to be fired.

Once several positions had been plotted for the target (blue circles on Figure 1 at left), plotting board operators estimated the position of the target at the instant a salvo, fired by the battery, was expected to land. This position was called the set forward point (green square in Figure 1), since it involved "setting forward" the target's expected position (assuming continued forward travel at the same speed and in the same direction) during two intervals of time: (1) the dead time between the time the observation had been made and the time the guns were actually fired at that target plus (2) the time of flight--the time the projectile spent in the air before hitting something. The set forward point was expressed in terms of firing data: a range (in yards) and an azimuth (a compass heading in degrees)[5]at which the gun/s should be pointed by the gun crews in order to hit the target.

Before these firing data were sent to the guns, however, they were corrected for a variety of "non-standard conditions", like temperature (which affected the explosive power of the powder charge) or wind strength and direction (which affected the flight of the projectile). The red "2" in the diagram at right indicates this stage in the fire control process. Special devices, like the deflection board (for corrections in azimuth) or the range correction board (for corrections in range) were used to produce corrected firing data.[6]

The final stage (the red "3" in the diagram at right) had to do with using feedback from the battery's observers, who spotted the fall of the projectiles (over or under range, left or right in azimuth, or on target) and telephoned their data to the plotting room so that the aim of the guns could be corrected for future salvos.[7]

The importance of timing 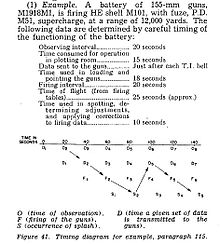 This example shows the relationship of steps in the fire control process playing out over time.

Fire control in the Coast Artillery involved a sequence of steps that was carried out over and over again while a target was being tracked and fired upon. First, observers sighted on the target and sent their observations to the plotting room. Next, plotters calculated the target's position and probable future movement, as well as adjustments to range and azimuth (direction). Then firing data were sent to the batteries and used by gun crews to point their guns. The guns were fired. Finally, spotters might spot the fall of the projectiles, sending this information back to the plotting room for use in correcting fire. After this, observers would sight on the (new) position of the target, beginning another cycle. The time period between sequential sightings by the observers was called the observing interval.[8] It was typically set at 20 sec. for controlling batteries of larger guns.[9]

Not only did everyone in the fire control system have to stay in synch (for example, knowing which one of a series of sets of fire control data they were working with at any given time) but certain functions (notably the making of target sightings by the observers and the firing of the guns by the gun crews) had to be carried out at precise intervals if the accuracy of the system was to be maintained.

To enable all battery personnel to stay in synch, a time interval bell (or buzzer) would be rung in every observation or spotting station serving the battery, in the plotting room, and at each gun, using bells or buzzers wired together with a centrally located master clock.[10] Five seconds before the start of the next cycle, the bell would ring. After a one second delay, it would ring again. And after another one-second gap the bell would ring a third time, and on this third ring the observations were made again and/or the guns were fired.

A well trained battery could observe, plot, adjust, and transmit the firing data to its guns, which could then be loaded and laid, all before the next 20-second bell, at which point the guns would be fired.[11] If for some reason the firing data were not received in time by the guns, or if a hold-up or a misfire occurred, then firing happened at the end of the following interval. In such a case, the command "Relay!" (re-lay) was given at the guns.[12]