Coalition for the International Criminal Court

Coalition for the International Criminal Court

The Coalition for the International Criminal Court (commonly known as CICC) is an international non-governmental organisation (NGO) with a membership of over 2,500 organizations worldwide advocating for a fair, effective and independent International Criminal Court (ICC.Coalition NGO members work in partnership to strengthen international cooperation with the ICC; ensure that the court is fair, effective and independent; make justice both visible and universal, and advance stronger national laws that deliver justice to victims of war crimes, crimes against humanity and genocide. The CICC is a project of the World Federalist Movement-Institute for Global Policy (WFM-IGP) and has secretariats in New York City, near the United Nations (UN), and in The Hague, The Netherlands. Additionally, the CICC has regional offices in Argentina, Belgium, Benin, the Democratic Republic of Congo, Jordan, Lima and the Philippines.

The Coalition was founded in 1995 by a small group of NGOs that coordinated their work to ensure the establishment of an International Criminal Court. Since then, the Coalition's membership has increased exponentially as its original goal of establishing the ICC grew to include the larger goal of guaranteeing the Court's fair, effective and independent functioning. Over the years, the Coalition Secretariat and its global membership have worked together at every stage of the Court's development from the preparatory committees for the establishment of the Court, to the Rome Conference that established the Court to the annual Assembly of States Parties meetings. Milestones in the Coalition’s work include the participation in and monitoring of the 1998 Rome conference, resulting in the adoption of the Rome Statute of the ICC; the Statute’s rapid entry into force on July 1, 2002; and the election of the Court’s senior officials, completed in June 2003. The role of the Coalition was recognized by the Assembly of States Parties when it adopted a resolution entitled ‘Recognition of the coordinating and facilitating role of the NGO Coalition for the International Criminal Court’ (ICC-ASP/2/Res.8) during its second session in September 2003. 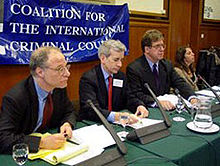 A core group of well-known and respected NGOs form the informal Steering Committee of the Coalition and determine the CICC’s goals. Adapting and adjusting to political developments, the Steering Committee helps guide the work of the Coalition’s Secretariat, serving as an advisory body not only to provide global policy coherence, but to ensure cooperation and provide crucial strategic oversight. Each of these organisations has its own ICC programs, staff and resources.

The Coalition for the ICC has established strong national and regional networks all over the world. The CICC national coalitions and regional networks typically comprise a diverse range of civil society groups working within a single country or region, including NGOs, academics, lawyers, bar associations and others. Through these networks, strategic plans to achieve the goals of this campaign, in particular ratification and implementation of the Rome Statute, and widespread education about the Court and the Statute, are developed and carried out.

The CICC Secretariat's Regional Section, its Regional Coordinators based around the world and its Outreach Liaisons in New York, support the development and capacity-building of the CICC networks and work closely with them at every stage.

The CICC monitors a wide range of issues relating to the work of the ICC through issue-specific teams and working groups composed of NGO representatives. Membership to these teams is open to all CICC members.

Currently these include topics such as: 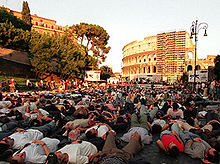 During the Rome Conference in 1998, Amnesty International held a lie-down (“tutti giù” in Italian) with protestors blocking streets around Rome’s Coliseum. Filippo Monteforte/ANSA

The Coalition advocates for universal ratification of the Rome Statute of the ICC as it is a cornerstone objective to making the membership in the ICC truly global and universal. The CICC believes that in order for the Court to succeed, an increasing majority of the world’s nations must support the Court.

In particular, the Coalition has Universal Ratification Campaign (URC) which focuses on one country each month, rotating to a different region each time. As part of this major campaign, members in every region are encouraged to redouble efforts in order to ensure universal acceptance of the ICC. Local actions are needed to promote awareness of the International Criminal Court, increase media coverage, urge governments to ratify the Rome Statute, adopt effective implementing legislation, and ratify the Agreement on Privileges and Immunities.

The CICC also campaigns for implementation of all of the crimes under the Rome Statute into domestic legislation. As the Court initiates new investigations, the existence of solid cooperation and implementing legislation has taken on further urgency.

In addition, the CICC is urging States to ratify and implement the Agreement on Privileges and Immunity of the ICC (APIC), designed to provide officials and staff of the ICC with certain privileges and immunities necessary for them to perform their duties in an independent and unconditional manner, and to guarantee that their officials are aware of the actual scope and realities of these privileges and immunities and how to apply them in concrete situations.

Current major funding is provided by the European Union, the Ford Foundation, the John D. and Catherine T. MacArthur Foundation, and the Open Society Institute, as well as by the governments of Belgium, Denmark, Finland, Liechtenstein, the Netherlands, Norway, Sweden, and Switzerland, and a number of individual donors.

The CICC has both electronic and print publications.

Tens of thousands of copies of our print resources are distributed worldwide to government representatives, international organizations, academics, civil society groups, and individuals. They provide updates on developments at the Court as well as at the Assembly of States Parties; reports on ICC-related events worldwide; details on new resources and upcoming events; and information about key issues related to the International Criminal Court. 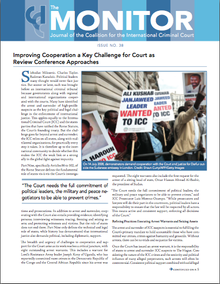 In Situ Blog • The Asia Update is a biannual online newsletter with information on ICC- related developments in Asia.

• The CICC blog “In Situ – See justice through the eyes of civil society”: In Situ is Latin for “in the natural place.” This term refers to the idea of bringing international justice and trial proceedings home to affected communities. The Coalition’s blog endeavors to help bridge the gap between the populations affected by the crimes under the Court’s investigation and the ICC’s daily activities at its headquarters in The Hague. In Situ features posts by some of the more than 2,500 members in 150 countries around the world.

In addition to these publications and the CICC website (www.iccnow.org), the Coalition’s electronic resources include information email lists in English, French, Spanish, and Portuguese to which daily postings are made. Summaries of all news coverage of the ICC, information on new ratifications of the Statute and progress towards ratification, announcements of upcoming events, notes and reports on the Assembly of States Parties, and other critical information is made available through these lists.