The Conservative – Liberal Democrat coalition is the present Government of the United Kingdom, formed after the 2010 general election. The Conservative Party and the Liberal Democrats entered into discussions which culminated in the 2010 coalition agreement, setting out a programme for government until the next general election, scheduled for 2015.

Notably, the government's aim has been to reduce the government debt over the five year parliament. The current government is the first formal coalition since the National Government formed during World War II.

The initial agreement between the Conservative Party and the Liberal Democrats spelled out eleven key areas on which the coalition would focus.[1]

Following the general election, negotiations took place between the Liberal Democrats and the Labour Party, and between the Liberal Democrats and the Conservatives. It became clear that Labour and the Liberal Democrats could not form a coalition government, while David Cameron made a "big, open, comprehensive offer" to the Liberal Democrats to form a coalition with them. Having agreed on a coalition, David Cameron (Con) accepted the Queen's invitation to form the government as Prime Minister, with George Osborne (Con) as the Chancellor of the Exchequer, William Hague (Con) as the Foreign Secretary, Theresa May (Con) as Home Secretary, while other key positions went to Nick Clegg (Lib Dem) as the Deputy Prime Minister, Liam Fox (Con) as Defence Secretary, Michael Gove (Con) as Education Secretary, Andrew Lansley (Con) as Health Secretary, Vince Cable (Lib Dem) as Business Secretary and Kenneth Clarke (Con) as Justice Secretary. One early resignation from the government was David Laws, initially appointed as Chief Secretary to the Treasury, but who quickly announced his departure as it was revealed that he had been claiming expenses to hide his relationship with long-term partner James Lundie. The Constitution Unit conducted a year-long research project into the coalition, interviewing 120 Parliamentarians, civil servants and ministers, and concluded that the coalition hasn’t been beset by partisan rancour but has been remarkably stable and decisive. [3] 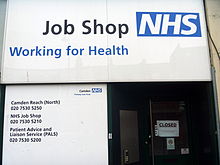 The coalition government (sometimes referred to as the 'Con-Dem' pact) has instituted cuts which have closed several services. The closure programme was initially focused upon public bodies funded by government, often known as quangos, which were abolished or merged. By July 2010, a total of 54 such bodies had either been abolished or had their funding withdrawn.[4] In October 2010 a list of 192 quangos to be abolished was officially released, with 118 to be merged.[5] These include:

In addition, several agencies will merge:[4]

A number of agencies including the Student Loans Company and the Central Office of Information were marked 'Under consideration' in the official Government release, subject to future reviews by the end of 2010.[6]

The coalition government has also closed a number of programmes or services provided directly by Government Departments, such as the public health National Support Teams.