Fuelling stations (aka: coaling stations) are repositories of fuel (coal & later oil) that have been located to service commercial and naval vessels. The term, fuelling stations also refers to railroad locomotive coaling towers.

Initially named a coaling station due to the use of coal for steam generation a fuelling station was built for the purpose of replenishing coal supplies for ships or railway locomotives. The term is often associated with 19th and early 20th century seaports associated with blue water navies, who used coaling stations as a means of extending the range of warships.

Railroad steam locomotives were well suited to use coal to fire their steam boilers; unfortunately, coal must be mined and transported. The railroads needed to create points along their right of ways to store coal for locomotive refueling, these points also became known as coal stations, many of which remain today due to the high cost of demolition incurred with these massive structures.[2]

Countries with large naval forces must maintain means for fueling their fleets in times of conflict, to this end defended fueling stations were setup around theaters of operations. Examples of such fuelling stations were Gibraltar, Malta, and Hong Kong for the British, and Honolulu [3], Pago Pago and Manila in the Pacific for the United States.[4] While defense of naval fuelling stations has historically focused on attack by other naval powers [5] the USS Cole bombing in the Yemeni port of Aden in October 2000 has focused attention on the importance of ship defense during refueling operations even in friendly fueling stations.[6]

As international trade grew a defined set of fixed routes, or sea lanes were established with fuelling stations appearing at strategic points along these routes. Since most fuelling stations did not possess natural resources in coal or oil the “bunkering” trade of transporting coal and oil to fueling stations consumed a considerable portion of shipping tonnage.[7]. As shipbuilding progressed to ever-larger ships, additional fuel storage capacity was incorporated into ship design that afforded greater range between refueling stops. Today most ocean going vessels have the ability to fuel for an uninterrupted ocean crossing at their terminal locations before setting to sea. 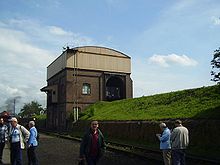 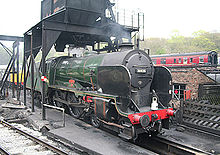 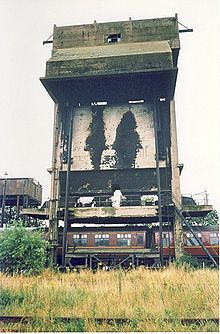 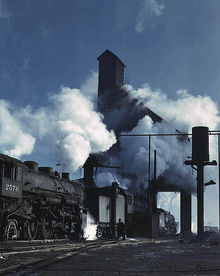 Locomotive 2576 over ash pit at the roundhouse and coaling station at the Chicago and Northwestern Railroad yards, Chicago, IL, USA.

The term coaling station (aka coaling tower) is also used with respect to the facilities established for re-fuelling of steam locomotives, usually provided at Motive Power Depots.[8] In almost all cases coaling stations used a gravity fed method that allowed coal to slide down a chute into the waiting locomotives coal storage area. The method of elevating the bulk coal above the locomotive varied, in some cases facilities were provided for raising coal trucks or wagons above the height of the locomotive tender[citation needed] or the bunker to facilitate re-fuelling, this was either done by means of a 'coal stage' or a 'coaling tower'.