Coal-water slurry fuel (CWSF or CWS or CWF) is a fuel which consists of fine coal particles suspended in water. Presence of water in CWS reduces harmful emissions into the atmosphere, makes the coal explosion-proof, makes use of coal equivalent to use of liquid fuel (e.g. heating oil), and gives other benefits (see below).

CWS consists of 55-70% of fine dispersed coal particles and 30-45% of water. Coal particles suitable for diesel fuel replacement typically need to be less than 20 micrometres in diameter.

CWS can be used in place of oil and gas in any size of heating and power station. CWS is suitable for existing gas, oil, and coal boilers. During the last 30 years the US Department Of Energy (DOE.Gov) has been researching the use of Coal Water Fuels in boilers, Gas Turbines and Diesel Engines. When used in Low Speed Diesels the CWF has resulted in thermal efficiency rating that rivals Combined Cycle Gas Turbines that burn Natural Gas as their primary fuel. It has been suggested that slightly modified modular Diesel engine power plants that burn CWF are economically competitive with Natural Gas fired peaking electric plants in the 10 MWe to 100 MWe range of power supply.

The presence of water in CWS reduces harmful emissions into the atmosphere and makes the coal explosion-proof. By converting the coal into a liquid form, delivery and dispensing of the fuel can be simplified.

Because of the relatively low cost of coal when compared to other energy sources, CWS is a very competitive alternative to heating oil and gas. Depending on geographical area the price per unit energy of CWS may be 30% to 70% lower than the equivalent oil or gas.

One side benefit of the Coal Water Slurry production process is the separation of non carbon material mixed with the coal before treatment. This results in a reduction of ash content to as low as 2% for the treated Coal Water Slurry Fuel, making it a viable alternative to Diesel fuel #2 for use in large stationary engines or Diesel Electric Locomotives.

Toward the end of 1950s, the Soviet Union started the development of new ways to utilize coal sludge for power generation. Two major problems of sludge transportation and sludge combustion were solved during the series of experiments and research.

Ball mills pulverize and mix the coal sludge with water producing coal-water slurry (mix of liquids and hard particles). CWS produced by milling the sludge and/or regular coal near the coal mine near Belovo (Siberia, Russia) was transported through the pipeline to Novosibirsk (Siberia, Russia), a distance of 262 km. Three intermediate pump-stations were installed for pumping CWS to Novosibirskaya TEC-5 in Novosibirsk.

The unique difference of project Belovo-Novosibirsk uses CWS directly for combustion in steam boilers at a rate of 1340 t per hour. In other world projects CWS was used only for transportation which was followed then with drying of CWS before the combustion of the pulverized coal.

A project at Belovo-Novosibirsk was started in 1989 but delayed and finished in 1993 due to economic disruptions caused by the transition from the Soviet Union to Russia. A drop in oil and gas prices made the use of CWS coal combustion less economical.

Since the 2004 Russia has continued the development and implementation of CWS technology for heating stations (for district heating) and power stations (WATERCOAL, LiquidCoal).

Coal of almost any types could be used as a raw for WCF: lignite, flame and gas flame coals, anthracites. Brown coal could also be used. Coal waste slurries could be used for preparing WCF Desirable ash: 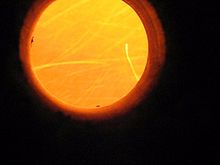 CWF can be used in several different applications, in the largest particle form it is a viable substitute for heavy grade fuel oils used to produce steam in boilers such as Diesel #6, Bunker C and Bunker D residual oil fuels. Additionally when the particle size is 80 micrometres or less the CWF can be used as a cofuel or substitute fuel in diesel engines. Low speed marine or modular powerplant diesels can operate on pure CWF. Medium speed diesels such as locomotive engines sometimes need a co-injection of Diesel #2 which acts as an ignition source for the CWF. For gas turbine testing CWF particles five to ten micrometres in size have been used to demonstrate useful substitution for petroleum or natural gas in combined cycle gas turbine powerplant applications.