The largest steam locomotives are semi-permanently coupled by a drawbar to a tender that carries the water and fuel. The fuel source used depends on what is economically available locally. In the UK and parts of Europe, a plentiful supply of coal made this the obvious choice from the earliest days of the steam engine. Until around 1850 in the United States, the vast majority of locomotives burned wood until most of the eastern forests were cleared. Subsequently coal burning became more widespread, and wood burners were restricted to rural and logging districts. 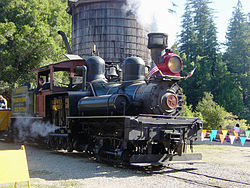 By the mid-1800s most steam locomotive tenders consisted of a fuel bunker (that held coal or wood) surrounded by a "U" shaped (when viewed from the top) water jacket. The overall shape of the tender was usually rectangular. The bunker which held the coal was sloped downwards toward the locomotive providing easier access to the coal. The ratio of water to fuel capacities of tenders was normally based on two water-stops to each fuel stop because water was more readily available than fuel. One pound of coal could turn six pounds of water (0.7 gallons) to steam. Therefore, tender capacity ratios were normally close to 14 tons of coal per 10,000 gallons of water.

The water supply in a tender was replenished at water stops and locomotive depots from a dedicated water tower connected to water cranes or gantries. Refilling the tender is the job of the fireman, who is responsible for maintaining the locomotive's fire, steam pressure, and supply of fuel and water.

Water carried in the tender must be forced into the boiler, to replace that which is consumed during operation. Early engines used pumps driven by the motion of the pistons. Later steam injectors replaced the pump, while some engines used turbopumps.

With track pans or water troughs

In the UK, the USA and France, water troughs (US track pans) were provided on some main lines to allow locomotives to replenish their water supply while moving. A 'water scoop' fitted under the tender or the rear water tank in the case of a large tank engine; the fireman remotely lowered the scoop into the trough, the speed of the engine forced the water up into the tank, and the scoop was raised once it was full.

The fuel and water capacities of a tender are usually proportional to the rate at which they are consumed, though there were exceptions. The Pennsylvania Railroad and the New York Central Railroad used track pans on many of their routes, allowing locomotives to pick up water at speed. The result was that the water tanks on these tenders were proportionally much smaller.

In the UK water troughs were used by three of the Big Four railways. The exception was the Southern Railway – mainly because the majority of the Southern's operations were based around short-distance commuter, suburban and rural services with frequent station stops where water could be taken on from water columns. The Southern's decision to electrify its routes into London with a third rail system also made the installation of water troughs impractical. Only on the former London and South Western Railway routes west of Salisbury, where long-distance express trains operated, was the lack of troughs a problem. Rather than install troughs the L&SWR (and the Southern) equipped its express locomotives with special high-capacity tenders with a water capacity of 4,000 gallons (18,200 l) running on a pair of twin-axle bogies. These were known to railwaymen as 'Water Cart' tenders.

A factor that limits locomotive performance is the rate at which fuel is fed into the fire. Much of the fireman's time is spent throwing wood or shoveling coal into the firebox of the locomotive to maintain constant steam pressure. In the early 20th century some locomotives became so large that the fireman could not shovel coal fast enough.[2] Consequently, in the United States, various steam-powered mechanical stokers (typically using an auger feed between the fuel bunker and the firebox) became standard equipment and were adopted elsewhere, including Australia and South Africa.

In the early days of railroading, tenders were rectangular boxes, with a bunker for coal or wood surrounded by a U-shaped water jacket. This form was retained up to the end of steam on many coal-burning engines. Oil-burning engines substituted a fuel tank for the bunker. Variations on this plan were made for operational reasons, in attempts to economize on structure.

In 1901, Cornelius Vanderbilt III, whose great-grandfather founded the New York Central Railroad, invented a cylindrical tender which was soon adopted by a number of American railroads with oil-burning and coal-burning locomotives.[1]

A form peculiar to oil-burning engines was the "whaleback" tender (also sometimes called a "turtle-back" or "loaf" tender). This was a roughly half-cylindrical form with the rounded side up; the forward portion of the tank held the oil, while the remainder held the water. This form was particularly associated with the Southern Pacific.[1]

In the United States, tenders with a sloped back were often used for locomotives in yard switching service, because they greatly improved the engineer's ability to see behind the locomotive when switching cars. The reduced water capacity was not a problem, as the tender's water tank could be frequently refilled in the rail yard.[1]

LNER Class A1 no. 4472 Flying Scotsman with corridor tender

For the introduction of the London and North Eastern Railway's non-stop Flying Scotsman service on 1 May 1928, ten special tenders were built with means to reach the locomotive from the train through a narrow passageway inside the tender tank plus a flexible bellows connection linking it with the leading coach. The passageway, which ran along the right-hand side of the tender, was 5 feet (1.52 m) high and 18 inches (0.46 m) wide. Further corridor tenders were built at intervals until 1938, and eventually there were 22; at various times, they were coupled to engines of classes A1, A3, A4 and W1, but by the end of 1948, all were running with class A4 locomotives.[3][4] Use of the corridor tender for changing crews on the move in an A4 loco is shown in the 1953 British Transport film "Elizabethan Express", the name of another London-Edinburgh non-stop train.

"Bittern" with second tender at York

An additional tender which holds only water is called a "canteen." During the steam era, these were not frequently used. Water tanks were placed at regular intervals along the track, making a canteen unnecessary in most cases. However, there were times that canteens proved economical. The Norfolk & Western used canteens with its giant 2-8-8-2 locomotives on coal trains. Use of the canteen allowed one of the water stops to be skipped, allowing the train to avoid climbing a hill from a dead stop. Currently, Union Pacific uses canteens with its steam locomotives 844 and 3985 on excursion trains. Virtually all the trackside tanks were removed when steam locomotives were retired. Nowadays, fire hydrant hookups are used, which fills the tanks much slower. The canteens allow for greater range between stops.

Canteens were also used on the Trans-Australian Railway which crosses the waterless Nullarbor Plain.

In the United Kingdom a canteen was used on the preserved Flying Scotsman during enthusiast excursions in the late 1960s and early 1970s. The water troughs that had previously supplied long-distance expresses had been removed during dieselisation of the railway network. On 25 July 2009, "Bittern" made a 188-mile run from King's Cross to York non-stop using a second tender. As railways in Britain tend to be much shorter than those in the US, the canteen was not an economical proposition.

] Sometimes a tender will be used for a diesel locomotive. This is typically a tank car with a fuel line that connects to the locomotive and MU connections to allow locomotives behind the tender to be controlled remotely. The Burlington Northern used fuel tenders in remote territory where fuel was expensive. Diesel fuel could be bought cheaply and loaded into the tender. A common consist was two EMD SD40-2s with a tender between them. Some of the tenders survived the Burlington Northern Santa Fe merger but retain the black and green BN colors. The Southern Pacific also briefly experimented with fuel tenders for diesels. Some slugs have fuel tanks and serve as fuel tenders for the attached locomotives.

Tenders have also been developed to carry liquefied natural gas for diesel locomotives converted to run on that fuel.[5]

On British railways, brake tenders were low, heavy wagons used with early main line diesel locomotives. One or two were coupled next to the locomotive to provide extra braking power when hauling unfitted or partially-fitted freight trains (trains formed from wagons not fitted with automatic brakes).[6][7] Originally intended to be used in North East England, where they were usually propelled (pushed) by the locomotive, and later used in other regions. On the Southern Region they were normally hauled behind the locomotive.[6]

The tender took the form of a hollow box, low enough to avoid obscuring the driver's view when pushed. The body was carried on a pair of former carriage bogies, which provided the automatic brakes.[8] The body was filled with scrap steel to raise the weight of the vehicle to 35½–37½ tons; consequently increasing the available brake force.[7] Four lamp brackets were provided at each end to display locomotive headcode discs describing the class of train – when propelled, the tender obscured the front of the locomotive, and hence the headcode.[9]

Introduced around 1964-5, they were taken out of use in the 1980s when the practice of using unfitted trains was discontinued.

Certain early British steam locomotives were fitted with powered tenders. As well as holding coal and water, these had wheels powered from the locomotive to provide greater tractive effort. These were abandoned for economic reasons; railwaymen working on locomotives so equipped demanded extra pay as they were effectively running two locomotives. However, the concept was tried again on the Ravenglass and Eskdale Railway's River Mite, and the Garratt locomotive may be seen as an extension of this principle. Powered tenders were also seen on the 2-8-8-8-2 and 2-8-8-8-4 locomotives in the United States, but these experiments were not considered successful.

In Germany, attention was given to ensuring that tender locomotives were capable of moderately high speeds in reverse, pushing their tenders. The numerous DRB Class 50 (2-10-0) locomotives, for example, were capable of 80 kilometres per hour (50 mph) in either direction, and were commonly used on branch lines without turning facilities.

A source of possible confusion with regards to German locomotives is that in German, Tenderlokomotive means a tank locomotive. A locomotive with a separate, hauled tender is a Schlepptenderlokomotive.

Preserved LMS Ivatt Class 2 2-6-0 no. 46443 at Bewdley on the Severn Valley Railway. The front of the tender has a half-cab for tender-first running.

In some instances, particularly on branch lines having no turnaround such as a turntable or wye at the terminus point, locomotives ran in reverse with the tender leading the train. In such instances, a headlamp (US) or headcode lamps/discs were placed on the leading end of the tender. Locomotive crews often rigged a tarpaulin (or the locomotive's storm sheet, if available) from the rear of the cab roof to the front of the tender to provide protection from the wind and to prevent coal dust being blown into the cab. Tenders designed for more frequent tender-first workings were often fitted with a fixed cab panel and windows, providing an almost fully enclosed cab.