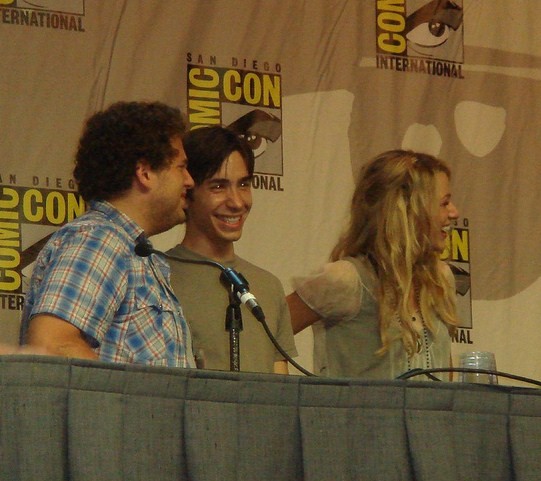 Long was born in . His mother, Wendy Lesniak, [ [http://www.moviesonline.ca/movienews_12217.html Justin Long Interview, Die Hard 4 - MoviesOnline ] ] is an actress who has mostly appeared on stage, and his father, , is a and teacher at . He has two brothers: an older brother, Damian, who is a local stage actor and a Film and English teacher and Theatre Director at Weston High School, in Weston, CT; and a younger brother, Christian, who appears in the movie "" as the school mascot. Long was raised in a , family [ [http://www.cinemablend.com/new/Interview-Justin-Long-3173.html Interview: Justin Long] ] and attended , a Jesuit school in Fairfield where he was given the "Most Likely Not To Be Seen In Class" superlative. He attended , where he was a member of the group Laughingstock and starred in several plays including "". He left college early to pursue his career. Before leaving, he worked at in Fairfield, Connecticut as an acting instructor/counseler for a children's theatre group.

Long is also known for his depiction of a Mac in Apple's campaign. The campaign features commercials in which Long as a Mac and as a PC, are engaged in playful banter about "the strengths of the Mac platform and weaknesses of the PC platform." [ [http://www.latimes.com/news/custom/showcase/la-ca-long23jul23,0,1268414.story?track=tottext McNamara, Mary. "Not Strictly Commercial." Los Angeles Times 23 Jul. 2006. The Life of Hollywood.] ] Despite Long's various roles as computer s, he admitted to CraveOnline, "I'm very, very computer illiterate... I get the worst of both worlds; I look like a geeky hacker but I don't know anything about computers". [ [http://www.craveonline.com/filmtv/articles/04648127/justin_long_on_living_free_and_well_you_know.html Justin Long on Living Free and Well, You Know] ]

In July 2008, it was announced that Justin had split with . [ [http://www.usmagazine.com/drew-barrymore-justin-long-split EXCLUSIVE: Rep: Drew Barrymore & Justin Long Split] .]

*imdb name|id=0519043|name=Justin Long
* [http://www.apple.com/getamac/ads/ Mac Ads]
* [http://www.radaronline.com/exclusives/2006/11/apple-ditches-mac-guy-in-new-ads.php RadarOnline Article about Apple not bringing Long back, and bringing him back after all]
* [http://movies.about.com/library/weekly/blbreakupjl052206.htm Video interview with Justin Long] at the premiere of ""
*" [http://www.transbuddha.com/mediaHolder.php?id=1343 Robin's Big Date] " on Transbuddha.com
* [http://www.craveonline.com/filmtv/articles/04648127/justin_long_on_living_free_and_well_you_know.html Justin Long on Living Free and Well, You Know]