The Social Democracy of America (SDA), later known as the Co-operative Brotherhood, was a short lived party in the United States that sought to combine the planting of an intentional community with political action in order to create a socialist society. It was an organizational forerunner of both the Socialist Party of America and the Burley, Washington cooperative socialist colony. 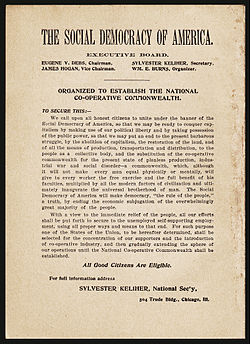 This 1897 ad by The Social Democracy of America emphasizes that "one of the States of the Union, to be hereafter determined, shall be selected for concentration of our members and the introduction of cooperative industry."

After being jailed in the aftermath of the 1894 Pullman strike, Eugene Victor Debs became interested in socialist ideas. Despite supporting William Jennings Bryan in the 1896 presidential race, Debs announced his conversion to socialism in January 1897. In June of that year he held a convention of his American Railway Union in Chicago. There it was decided to merge the ARU with a faction of the Brotherhood of the Cooperative Commonwealth and other elements to create a new organization, the Social Democracy of America. The magazine of the ARU, Railway Times, became the new organization's official organ, The Social Democrat.[1]

Among the elements that joined the ARU and BCC in forming the new party was a faction of independent Midwestern socialists centered around Victor Berger. This mainly German-American group kept up a loosely organized Social Democratisher Verein and published the oldest socialist daily in the country, the Milwaukee Vorwarts.[2] This tendency emphasized electoral socialism, especially in local politics, in order to appeal to workers on issues of immediate, day-to-day importance. Prominent "American" adherents to this faction included Seymour Stedman and Frederic Heath.[3]

While the SDA was being organized, there was some factional trouble within the older Socialist Labor Party. Some elements within the SLPs Jewish membership, concentrated in Manhattans Lower East Side, had objected to the parties dual unionism policy. As a consequence the Party's Yiddish language papers, the Dos Abend Blatt and Arbeter-Zeitung were put under direct party control.[4] When the dissidents responded by launching the Jewish Daily Forward and forming "Press Clubs" to influence party activity among Jewish members, the Party leadership expelled the fourth, fifth and twelfth assembly district branches on July 4. The expelled branches held a convention July 31 to August 2, at which they decided to affiliate with the Social Democracy of America.[5][6] Among the prominent members of this faction were Abraham Cahan, Meyer London, Isaac Hourwich, Morris Winchevsky, Michael Zametkin, Max Pine and Louis F. Miller.[7]

In St. Louis, the local SLP branch had published its own paper Labor in the early to mid-nineties, edited by Albert Sanderson and Gustav Hoehn, which showed independence from the SLP leadership and also opposed the dual union policy. This papers editorial policy was condemned and the paper disaffiliated with the Party at its 1896 convention, but ill feeling toward the Party leadership continued.[8] In January 1897 the St. Louis local readmitted a member named Priestbach into the party, after he had left in 1896 to work for William Jennings Bryan's campaign. The vote for readmittance was 28 to 24 in Priesterbachs favor, which was less than the two thirds prescribed by the SLP constitution. On petition of "loyal" members the St. Louis local was reorganized and the dissident members went into the new Social Democracy of America.[9] This contingent was bolstered in August 1897 when the SDA was joined by the remnants of the Social Democratic Federation, a predominantly German-language group headed by Wilhelm Rosenberg which had split off the SLP in 1889.[10]

From the very beginning there were divisions in the group between those who saw its main purpose as winning office and introducing socialistic legislation and those influenced by the BCC idea of trying to "socialize" a western state by planting socialist colonies there and eventually taking over its government. Nevertheless, a three man colonization commission criss crossed the country visiting possible sites, especially in Colorado and Tennessee.[11]

At the opening of the SDAs convention on June 7, 1898, there was already a great deal of tension between the colonizationists and political actionists, the latter group accusing the former of trying to "pack" the convention with delegates from recently formed "paper branches" in the Chicago area. The divisions came to a head on June 10, when the convention heard the reports of its platform committee. The majority report, presented by Victor Berger and Margaret Haile, recommended the abandonment of the colonization scheme. The minority report written by John F. Lloyd, but read to the convention by J.S. Ingalls, favored the two pronged approach adopted a year earlier. The platform question caused long and bitter debate, lasting until 2 AM the next morning when a roll call vote showed 53 for the colonization platform and 37 against. With the defeat of the political action platform, Isaac Hourwich led a walk out of the minority to Revere House across the street. There the dissidents founded the Social Democratic Party of America, which in 1901 would merge with other groups to become the Socialist Party of America.[12][13]

The majority, however, attempted to carry out their colonization scheme. They published three more issues of the Social Democrat, but financial difficulties made them halt the fourth issue while in type. Fearing that the organization might go under if a colony was not established immediately, they authorized Cyrus Field Willard to locate a colony and "do what in his judgment appeared the right thing to do". Willard went to Seattle to consult with SDA member J.B. Fowler, who pointed out the good harbors on southern Puget Sound. Here they found Henry W. Stein, who was sympathetic to them politically and had just become the executor of some land in rural Kitsap County that was open for sale. In September 1898 the SDA re-incorporated in Seattle as the Co-Operative Brotherhood and on October 18 they purchased 260 acres (1.1 km2) for $6,000. The first colonists arrived on October 20, 1898.[14]

While never reaching more than about 120 inhabitants, the colony thrived for a few years. Originally named "Brotherhood", the inhabitants gradually began to refer to it as "Burley" after the nearby Burley creek. A colony scrip was created that included a $1 denomination for an eight hour work day and smaller units, called minims, for minutes worker over or less than six hours.[15] "Circle City" was the informal name of a group of buildings near the water.[16] The colony subsisted on agriculture, fishing and logging. They also made income selling cigars, jam, subscriptions of its magazines and membership in the B.C. It also rented out use of its mill, and rooms in its "Commonwealth Hotel" for visitors.[17]

Initially led by Willard, he left in 1899 to join a Theosophist colony in Point Loma, California. Later the Brotherhood was governed by a twelve man board of trustees who were elected by mail vote each December for four year staggered terms. A board of directors managed the affairs of the colony itself, and was elected every January.[18] Members of the Co-operative Brotherhood who were not residents of the colony organized in local chapters called Temples of the Knights of the Brotherhood, in places like Chicago..

The colony went into decline in the late 1900s. In December 1904 some members re-incorporated into the Burley Rochdale Mercantile Association, and three months later the Co-operative Brotherhood itself re-organized into a joint stock company. By 1908 there were 150 members of the Brotherhood, only 17 resident of the colony. The trustees called a meeting of stockholders to dissolve the Brotherhood in late 1912, but it lacked the two-third majority, whereupon those who were in favor of disbanding took the company to court. On January 10, 1913 Judge John P. Young ordered the Co-operative Brotherhood dissolved and put its assets into receivership. The last of its properties were sold off in 1924.[20]