Legislature of the European Union

Legislature of the European Union

Normally legislative proposals need to be approved by both the Parliament and the Council to become law. The relative power of a particular institution in the legislative process depends on the legislative procedure used, which in turn depends on the policy area to which the proposed legislation is concerned. In some areas, they participate equally in the making of EU law, in others the system is dominated by the Council. Which areas are subject to which procedure is laid down in the treaties of the European Union.

The power to amend the Treaties of the European Union, sometimes referred to as the Union's primary legislation, is reserved to the member states and must be ratified by that in accordance with their respective constitutional requirements. An exception to this are so-called passerelle clauses in which the legislative procedure used for a certain policy area can be changed without formally amending the treaties.

The European Parliament's 736[2][dated info] members are directly elected every five years by universal suffrage. It organises itself as a normal multi-party parliament in conducting most of its work in its committees and sitting in political groupings rather than national delegations. However, its political groups are very weak due to their status as broad ideological groups of existing national parties.

The Parliament's powers have grown considerably since the 50s as new legislative procedures granted more equality between Parliament and Council. It also has gained greater powers over the appointment of the Commission, which has always been responsible to it (Parliament has the power of censure).

The Council of the European Union represents the national governments of member states, and hence its composition is essentially the number of member states (27) though votes are weighted according to the population of each state (see procedures below for clarification). As such, it does not sit according to political groups and rather than conducting most of its work in committees, much of its work is prepared by diplomatic representatives (COREPER).

Under the ordinary legislative procedure (see below), the negative opinion from the Commission also forces the Council to vote by unanimity rather than majority.[4] There are also limited instances where the Commission can adopt legislation on its own initiative (See below).

The national parliaments of EU member states have an "early warning mechanism" whereby if one third raise an objection - a "yellow card" - on the basis that the principle of subsidiarity has been violated then the proposal must be reviewed. If a majority do so - an "orange card" - then the Council or Parliament can vote it down immediately. If the logistical problems of putting this into practice are overcome, then the national parliaments would form a "virtual third chamber".[5] 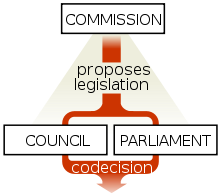 If, within three months of receiving Parliament's new text the Council approves it, then it is adopted. If it does not then the Council President, with the agreement of the Parliament President, convenes the Conciliation Committee composed of the Council and an equal number of MEPs (with the attendance and moderate of the Commission). The committee draws up a joint text on the basis of the two positions. If within six weeks it fails to agree a common text, then the act has failed. If it succeeds and the committee approves the text, then the Council and Parliament (acting by majority) must then approve said text. If either fails to do so, the act is not adopted.[4]

The treaties have provision for special legislative procedures to be used in sensitive areas. These see the Council or Parliament adopts alone with just the involvement of the other. Notable procedures are the consultation and consent procedures, though various others are used for specific cases.

Consultation is still used for legislation concerning internal market exemptions and competition law.[12] The procedure is also used in relation to the Union's advisory bodies such as the Committee of the Regions and the Economic and Social Committee that are required to be consulted under a range of areas under the treaties affecting their area of expertise. Such a procedure takes place in addition to consultation with the European Parliament or the other legislative procedures.

In the consent procedure (formerly assent procedure), the Council can adopt legislation based on a proposal by the European Commission after obtaining the consent of Parliament. Thus Parliament has the legal power to accept or reject any proposal but no legal mechanism exists for proposing amendments. Parliament has however provided for conciliation committee and a procedure for giving interim reports where it can address its concerns to the Council and threaten to withhold its consent unless its concerns are met.[13] This applies to admission of members, methods of withdrawal, subsidiary general legal basis provision and combating discrimination.[12]

Under this procedure the Council can adopt laws proposed by the Commission without requiring the opinion of Parliament. The procedure is used when setting the common external tariff (Article 31 (ex Article 26)) and for negotiating trade agreements under the Common Commercial Policy (Article 207(3)).

In a few limited areas, the Commission has the authority to adopt regulatory or technical legislation without consulting or obtaining the consent of other bodies. The Commission can adopt legislation on its own initiative concerning monopolies and concessions granted to companies by Member States (Article 106(3) TFEU) and concerning the right of workers to remain in a Member State after having been employed there (Article 45(3)(d) TFEU). Two directives have been adopted using this procedure: one on transparency between member states and companies[14] and another on competition in the telecommunications sector.[15]

The Passerelle Clause allows for the changing of voting procedures without amending the EU treaties. Under this clause the European Council can, after receiving the consent of the European Parliament, vote unanimously to:

A decision of the European Council to use either of these provisions can only come into effect if, six months after all national parliaments had been given notice of the decision, none object to it.

Legal acts resulting from these procedures can come in a number of forms. A regulation is a law that has direct effect; for example the roaming charges regulation which immediately set price limits on mobile phone calls made in another EU state. A directive needs to be transposed, within certain limits, into national law; for example the copyright duration directive which was transposed in Greece as Law No. 2557/1997 and Ireland as European Communities (Term of Protection of Copyright) Regulations, 1995. A decision has direct effect, but only relating to a specific person or entity, and there are also various other non-binding instruments.