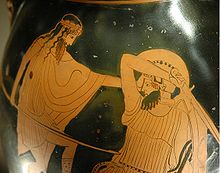 In Greek mythology, the Giants were the children of Gaia, who was fertilized by the blood of Uranus, after Uranus was castrated by his son Cronus.[1] Some depictions stated that these Giants had snake-like tails. 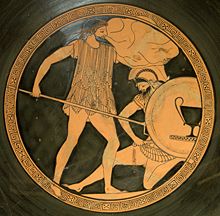 Gaia, incensed by the imprisonment of the Titans in Tartarus by the Olympians, incited the Giants to rise up in arms against them, end their reign, and restore the Titans' rule. Led on by Alcyoneus, and Porphyrion, they tested the strength of the Olympians in what is known as the Gigantomachia or Gigantomachy. The Giants Otus and Ephialtes hoped to reach the top of Mount Olympus by stacking the mountain ranges of Thessaly, Pelion, and Ossa on top of each other.

The Olympians called upon the aid of Heracles after a prophecy warned them that he was required to defeat the Giants, for the aid of a mortal was needed.[2] Athena, instructed by Zeus, sought out Heracles and requested his participation in the battle. Heracles responded to Athena's request by shooting an arrow dipped in the poisonous blood of the dreaded Hydra at Alcyoneus, which made the Giant fall to the earth. However, the Giant was immortal so long as he remained in Pallene. Athena advised Heracles to drag Alcyoneus outside Pallene to make the Giant susceptible to death. Once outside Pallene, he was beaten to death by Heracles. Heracles slew not only Alcyoneus, but dealt the death blow to the Giants who had been wounded by the Olympians. The Giants who died by the hero's hands were Alcyoneus, Ephialtes, Leon, Peloreus, Porphyrion and Theodamas, giving Heracles the most kills of the Gigantomachy.[3] 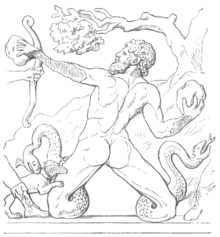 The Olympians fought the Giants with the Moirae aiding them before the aforementioned prophecy was made, meaning the Giants would have overcome the combined efforts of both Olympus and the Sisters of Fate had Heracles not fought.

"Power is latent violence, which must have been manifested at least in some mythological once-upon-a-time. Superiority is guaranteed only by defeated inferiors," Walter Burkert remarked of the Gigantomachy.[4]

This battle occurred in the time when Heracles lived, so many events had already happened: the establishment of the Olympian gods, their progeny, the adventures of Perseus (forefather of Heracles) and so on. Thus in the Gigantomachy, the Moirae and Heracles, having joined the Olympians, defeated the Giants and quelled the rebellion, confirming their reign over the earth, sea, and heaven, and confining the Giants into Tartarus. The only Giant not slain in the conflict was Aristaios, who was turned into a dung beetle by Gaia so the Giant might be safe from the wrath of the Olympians.[5] 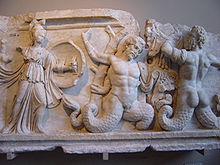 In the Gigantomachy from a 1st century AD frieze in the agora of Aphrodisias, the Giants are depicted with scaly coils, like Typhon

Whether the Gigantomachy was interpreted in ancient times as a kind of indirect "revenge of the Titans" upon the Olympians — as the Giants' reign would have been in some fashion a restoration of the age of the Titans — is not attested in any of the few literary references. Later Hellenistic poets and Latin ones tended to blur Titans and Giants.[6]

According to the Greeks, the Giants were buried by the gods beneath the earth, where their writhing caused volcanic activity and earthquakes.

In iconic representations the Gigantomachy was a favorite theme of the Greek vase-painters of the 5th century BC.

More impressive depictions of the Gigantomachy can be found in classical sculptural relief, such as the great altar of Pergamon, where the serpent-legged giants are locked in battle with a host of gods, or in Antiquity at the Temple of Olympian Zeus at Acragas.[7]

The names of the Giants 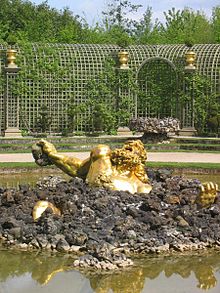 Fountain of the Giants in the gardens of Versailles.

Some of the Giants identified by individual names were: