Clyde Lamb's painting for a calendar

Born in Sidney, Montana, Lamb was drawing while he was in the Montana Industrial School for Boys at age 17. After one year of high school, he ran away from a broken home. At age 19, in Memphis, Tennessee in 1932, he was convicted of armed robbery and given a five-year sentence. After escaping 18 months later, he made his way to Hammond, Indiana. While working there as a self-taught sign painter, he met and married Gladys Lamb on August 4, 1934. Ten days after his marriage, he was again arrested for armed robbery and sentenced to two 25-year terms in the Indiana State Penitentiary in Michigan City, Indiana.[1]

Lamb on the lam

On August 31, 1934, when Gladys was living in Calumet City, Illinois, she inserted a dozen broken hacksaw blades into pears and traveled to Gary, Indiana to visit her husband in the Lake County jail. As she passed the pears to her husband, Chief deputy sheriff Carroll Holley became suspicious and intervened. Gladys was kept overnight and then released because she was pregnant. (Carroll Holley was the nephew of Sheriff Lillian Holley, whose car was stolen by John Dillinger when he used a wooden gun to escape from that same jail earlier that summer.)

In April 1935, when Lamb was escorted to Chicago to visit Gladys after she gave birth to their stillborn son, he escaped from a guard at the train station by running in front of a moving train. Shot by a police officer when he was captured July 1935, he was returned to prison. Gladys Lamb filed for a divorce at Clyde's insistence, which was granted on November 1, 1937. She gave birth to Joan Charlotte on June 30, 1938.[2]

During the 1940s, Lamb began drawing cartoons while in prison, initially for the amusement of other inmates, and he painted several oil paintings. He was urged to sell his cartoons by the prison's former arts and crafts director who had just retired from the prison system. Between 1943 and 1947, Lamb began successfully marketing his cartoons to The Saturday Evening Post, Collier's, The American Magazine and other publications. During one year while incarcerated he made $11,000. His success and the surrounding publicity led directly to his release. Granted a new trial, he was convicted, but Judge William J. Murray at Crown Point gave him a ten-year suspended sentence. He was still wanted in Tennessee as an escaped convict, but Tennessee Governor Jim Nance McCord commuted his sentence and ordered him paroled to Indiana authorities.[3][4]

After he was released June 24, 1947, Lamb left for Glendive, Montana to visit relatives. Gladys and Clyde Lamb then remarried in Montana.[5][6][4] 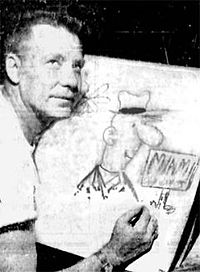 On November 14, 1949, Lamb launched his pantomime newspaper comic strip, Herman, as a daily, with a Sunday strip added November 2, 1952. Distributed by Iowa's Register and Tribune Syndicate, Lamb's strip was carried during the 1950s in 55 newspapers in the United States, India and Africa. (It had no connection to the strip Herman by Jim Unger.)

In 1957, Lamb began Open Season, a newspaper gag cartoon panel about hunting and fishing. Lamb also created oil paintings of landscapes and portraits that are currently owned by his granddaughter Kathleen.[7]

On March 2, 1955, Lamb was surprised on live television to learn that Ralph Edwards had made him the subject of that week's This Is Your Life episode. The episode is available at the UCLA Film and Television Archive.

In November 1956, Clyde and Gladys were vacationing in Miami with plans to extend their vacation to Havana. The couple traveled extensively through California, Louisiana, Mississippi, Oregon, Washington, Europe, Africa and Mexico from 1947 until his death. His last address in the United States was 22839 Saticoy Street in Canoga Park in Los Angeles.

At the age of 53, he died of pancreatic disease in Dublin, Ireland on July 8, 1966, and was cremated at the Belfast Crematorium in Northern Ireland on August 12, 1966. His ashes were scattered by his family in Makoshika State Park in Montana. Gladys Lamb died in Arizona in 1983.[8]