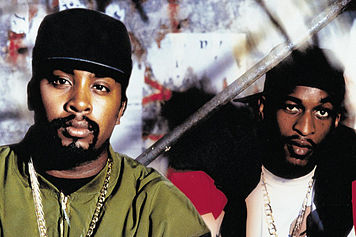 Eric Barrier () and William Barrier Griffin Jr. () were a hip-hop duo known as Eric B. & Rakim.

The pair is generally considered to be one of the most influential and groundbreaking groups in the hip hop genre because of the duo’s dark production and Rakim's rhyming style, which was smooth, seemingly effortless, and used complex rhyming schemes involving internal rhymes and sophisticated s. Their single "I Know You Got Soul" borrowed extensively from the record of the same name, and was one of the era's stand-out -influenced recordings.

Eric B. & Rakim began recording together in the middle of the 1980s with "Eric B. Is President" (), originally released on Zakia Records in Harlem, . The single, produced by , who incorporated the bassline from the R&B club hit "Over Like a Fat Rat" by Fonda Rae, quickly became a hip-hop anthem. "Paid in Full" and "Follow the Leader" were the duo’s first two full-length albums and were hits by hip hop's standards at the time. In 1989 the pair teamed up with singer for the "Billboard" pop chart top-ten hit "Friends," one of the first collaborations of pop and hip hop artists, featured on Watley's "" album. Much of the duo’s initial impetus and influence can be attributed to its now deceased mentor and deejay, FLAME 3 of the TPA graffiti crew. The "Seven Minutes of Madness" remix of "Paid in Full" is considered a milestone in hip-hop, es, and sample-based music and is arguably the duo’s most-recognized hit. Despite its world wide success which led to the track entering many overseas top ten s, the duo claimed not to like the remix during its release.fact|date=July 2008

The duo's last album together was "" (1992). Its single "Know the Ledge" was the theme song of the feature film "Juice" and was among its most popular hits. During the recording of that album, both members expressed an interest in recording solo albums. However, Eric B. refused to sign the label's release contract, fearful that Rakim would abandon him. This led to a long and messy court battle involving the two musicians and their former label . Eric B. did release a solo album in the early 1990s on an independent label, but without much commercial succes. Rakim released two solo albums, and a third has been in the works for many years.

In 2004 "I Know You Got Soul" appeared on popular "", playing on classic hip-hop radio station .