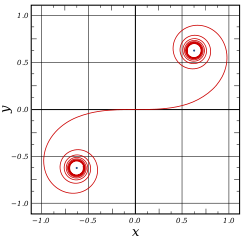 An Euler spiral is a curve whose curvature changes linearly with its curve length (the curvature of a circular curve is equal to the reciprocal of the radius). Euler spirals are also commonly referred to as spiros, clothoids or Cornu spirals.

On early railroads this instant application of lateral force was not an issue since low speeds and wide-radius curves were employed (lateral forces on the passengers and the lateral sway was small and tolerable). As speeds of rail vehicles increased over the years, it became obvious that an easement is necessary so that the centripetal acceleration increases linearly with the traveled distance. Given the expression of centripetal acceleration V² / R, the obvious solution is to provide an easement curve whose curvature, 1 / R, increases linearly with the traveled distance. This geometry is an Euler spiral.

Marie Alfred Cornu (and later some civil engineers) also solved the calculus of Euler spiral independently. Euler spirals are now widely used in rail and highway engineering for providing a transition or an easement between a tangent and a horizontal circular curve.

The Cornu spiral can be used to describe a diffraction pattern.[1] 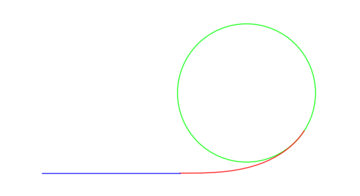 The graph on the right illustrates an Euler spiral used as an easement (transition) curve between two given curves, in this case a straight line (the negative x axis) and a circle. The spiral starts at the origin in the positive x direction and gradually turns anticlockwise to osculate the circle.

The spiral is a small segment of the above double-end Euler spiral in the first quadrant.

From the definition of the curvature,

We write in the format,

If a = 1, which is the case for normalized Euler curve, then the Cartesian coordinates are given by Fresnel integrals (or Euler integrals):

Expand C(L) according to power series expansion of cosine:

Expand S(L) according to power series expansion of sine:

For a given Euler curve with:

The process of obtaining solution of (x, y) of an Euler spiral can thus be described as:

In the normalization process,

Generally the normalization reduces L' to a small value (<1) and results in good converging characteristics of the Fresnel integral manageable with only a few terms (at a price of increased numerical instability of the calculation, esp. for bigger

Other properties of normalized Euler spiral

Normalized Euler spiral can be expressed as:

Code for producing an Euler spiral

The following Sage code produces the second graph above. The first four lines express the Euler spiral component. Fresnel functions could not be found. Instead, the integrals of two expanded Taylor series are adopted. The remaining code expresses respectively the tangent and the circle, including the computation for the center coordinates.

The following is Mathematica code for the Euler spiral component (it works directly in wolframalpha.com):