Marie Clotilde of France[3][4] (Marie Adélaïde Clotilde Xavière; 23 September 1759 – 7 March 1802), known as Madame Clotilde, was a French princess who became Queen of Sardinia as Clotilda in 1796. She was the younger sister of Louis XVI of France and later the wife of Charles Emmanuel IV of Sardinia. 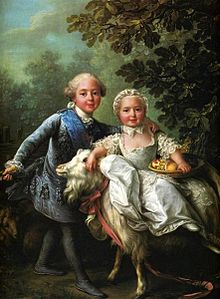 Charles and his younger sister clotilde are mounting a goat

Born in Versailles, Marie Clotilde was the elder daughter of Louis, Dauphin of France, the only son of King Louis XV, and of the Dauphin's wife, Princess Maria Josepha of Saxony. As the granddaughter of the king, she was a Petite-Fille de France. Upon the death of their grandfather in May 1774, Clotilde's oldest brother, Louis Auguste, became king Louis XVI of France.

Because she was overweight, Marie Clotilde was nicknamed Gros-Madame in her youth. She and her younger sister Élisabeth were raised by Madame de Marsan after the death of their father in 1765 and their mother in 1767. Because she married and left France soon after Louis XVI acceded to the throne, Marie Clotilde did not have enough time to form a close relationship with her sister-in-law, Queen Marie Antoinette. Marie Clothilde was described as passive and apathetic, which gave the perception of insensitivity, but she was, however, very close to her sister, who reportedly took her departure very hard.[5]

On 27 August 1775, Louis XVI had his sister Marie Clotilde married in Versailles by procuration to Charles Emmanuel, Prince of Piedmont, eldest son of Victor Amadeus III of Sardinia and of his wife Maria Antonia Ferdinanda of Spain. Marie Clotilde traveled to Turin, met her husband on the way at Pont-de-Beauvoisin and finally her father-in-law and the rest of the Sardinian court at Chambéry. She was accompanied by her bother the Count of Provence and her husband. The official wedding took place in Turin. Marie Clotilde had been taught Italian in order to fulfill her role as eventual Queen of Sardinia. After her marriage some in the French court joked that perhaps her groom had been given two brides instead of one, in reference to her weight. Her father-in-law was concerned that her weight might affect her ability to bear children. The groom reportedly commented that he had been given "more to worship".[6]

Although the union was arranged for political reasons, Marie Clotilde and Charles Emmanuel became devoted to each other, united in their piety and a strong belief in the Roman Catholic faith. The marriage, however, was to stay without children. She was close to her sisters-in-law, the Duchess of Aosta and the Duchess of Chablais.

After her marriage, Marie Clotilde never returned to France. The French Revolution proved to be a disaster for her family. Her oldest brother, King Louis XVI; his wife, Queen Marie Antoinette; and her younger sister, Madame Élisabeth, were all guillotined. Her youngest brother, the comte d'Artois, escaped from France in 1789 and fled to Turin to stay under the protection of her father-in-law, the king of Sardinia.

Marie Clotilde also harboured her aunts, Madame Adélaïde and Madame Victoire, after they too managed to escape.

In 1796, upon the accession of her husband to the throne, Marie Clotilde became the Queen of Sardinia. On 6 December 1798, the French First Republic declared war on Sardinia. Charles Emmanuel was forced to abdicate all his territories on the Italian mainland and to withdraw to the island of Sardinia. As Charles Emmanuel took little interest in the rule of what was left of his kingdom, he and Marie Clotilde lived in Rome and then in Naples as guests of the wealthy Colonna family. Marie Clotilde nursed her husband's aunt Princess Maria Felicita of Savoy through her last illness in Naples.

Marie Clotilde died on 7 March 1802. Charles Emmanuel was so moved by her death that he abdicated on 4 June 1802 in favour of his younger brother, Victor Emmanuel. Marie Clotilde de France was buried in the Church of Santa Caterina a Chiaia in Naples. Pope Pius VII, who had personally known Marie Clotilde, declared her venerable on 10 April 1808, the first step to her beatification.

When the House of Bourbon, was restored after the fall of Napoleon in 1814, her two surviving brothers acceded to the throne of France: the comte de Provence as King Louis XVIII from 1814 to 1824, and the comte d'Artois as King Charles X from 1824 to 1830.

Media related to Marie Clotilde of France at Wikimedia Commons