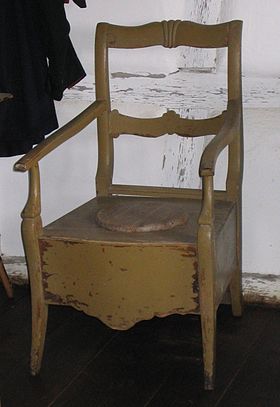 A close stool, used from at least the sixteenth century until the introduction of indoor plumbing, was an enclosed cabinet or box at sitting height with an opening in the top, which might be disguised by a folding outer lid. The close stool contained a pewter or earthenware chamberpot to receive the feces when the user sat on it to evacuate. It was sometimes called a necessary stool or a night stool. The eighteenth-century euphemism was convenience; the term was further euphemised in the nineteenth century with the term night commode, which John Gloag suggested[1] may have derived its significance from a design for a "balance night stool" in Thomas Sheraton's Cabinet Dictionary (London, 1803); Sheraton's design was "made to have the appearance of a small commode standing upon legs; when it is used the seat part presses down to a proper height by the hand, and afterwards it rises by means of lead weights, hung to the seat, by lines passing over pulleys at each end, all which are enclosed in a case."

Commode survived into the twentieth century to refer to the flush toilet, itself originally euphemistic.