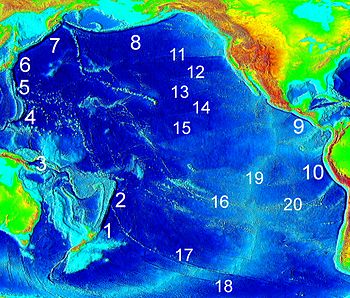 Major Pacific trenches (1–10) and fracture zones (11–20). The Clipperton Fracture Zone is the nearly horizontal line No. 15 below the Clarion Fracture Zone (14), and the Middle America Trench is the deep-blue line No. 9.

The Clipperton Fracture Zone is a geological submarine fracture zone of the Pacific Ocean, with a length of some 4500 miles (7240 km).[1] It is one of the five major lineations of the northern Pacific floor, south of the Clarion Fracture Zone, discovered by the Scripps Institution of Oceanography in 1950. The fracture, an unusually mountainous topographical feature, begins east-northeast of the Line Islands and ends in the Middle America Trench off the coast of Central America.[2][3][1] It is roughly forms a line on the same latitude as Kiribati and Clipperton Island. The fracture can be divided into four distinct parts. The first, lasting from 127–113 degrees W, is a broad, low welt of some 900 miles, with a central trough 10 to 30 miles wide. The second, from 113 to 107 degrees, is a volcano enriched ridge, 60 miles wide and 33 miles long. The third, 107 to 101 degrees W, is a low welt with a central trough 1,200–2,400 feet deep which transects the Albatross Plateau and the fourth, 101-96 degrees W, contains the Tehuantepec Ridge which extends 400 miles northeast to the continental margin. [3] The Nova-Canton Trough is often seen as an extension of the fracture.[4]