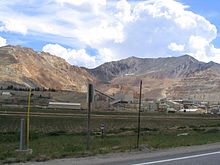 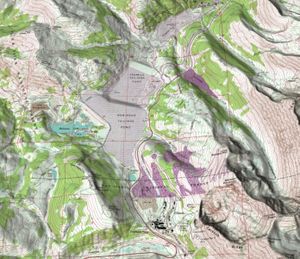 The Climax mine straddles the continental divide at Fremont Pass

The Climax mine, located in Climax, Colorado, United States, was a major molybdenum mine in Lake and Summit counties, Colorado. In its heyday, the Climax mine was the largest molybdenum mine in the world, and for many years it supplied three-fourths of the world's supply of molbdenum. The mine is currently (2010) inactive, but may reopen when the economy recovers.[1]

The prospector Charles Senter discovered and claimed the outcropping of molybdenite (molybdenum sulfide) veins in 1879, during the Leadville, Colorado, Silver Boom, but he had no idea what the mineral he found was. Senter quickly determined that the rock contained no gold or silver, but he kept the claims anyway. The following year he settled down to live with his Ute Indian wife in a cabin a few miles north, and he made a living working a nearby gold placer. Each year he faithfully did the assessment work required to keep his lode claims, convinced that his mystery mineral must be worth something but he died penniless, before any real value could be placed on either the mineral or the property.[2]

Although Senter finally found a chemist who identified the gray mineral as containing molybdenum in 1895, at the time there was virtually no market for the metal. When steelmakers found the usefulness of molybdenum as an alloy in producing very hard steel, the first ore shipments from the deposit began in 1915, and the Climax mine began full production in 1914. The main ore bearing area was Bartlett Mountain, which was mined out during the early mining. But the demand for molybdenum fell drastically at the end of World War I, and the Climax mine shut down in 1919.[3] Molybdenum later found use in the metal alloys for the turbines of jet engines.

The Climax Molybdenum Company re-opened the mine in 1924, and it operated the mine nearly continuously until the 1980s. The mine has been shut down since 1995, awaiting higher molybdenum prices. The mine's current owner, Freeport-McMoRan Copper & Gold, continues to work on environmental cleanup of past operations while holding the mine ready in the event of market changes.

In December 2007 Freeport-McMoRan reported that it planned to reopen the Climax mine and that production should start in 2010. An initial $500-million project involves the restart of open-pit mining and construction of state-of-the-art milling facilities.[4] The company stated that the Climax mine has "... the largest, highest-grade and lowest-cost molybdenum ore body in the world.".[5] The remaining ore reserves are estimated to contain about 500 million pounds of molybdenum, contained in ore at an average molybdenum percentage of 0.165%. Production was expected to be about 30 million pounds per year, starting in 2010.[6]

However, Freeport-McMoRan announced in November 2008 that it had deferred plans to reopen the Climax mine, due to lower molybdenum prices.[7][8] The company had spent about $200 million preparing for a restart of the mine, with an estimated $350 million more needed to reopen.[1] Again, in May 2011, mining operations at Climax are anticipated to resume, albeit at a reduced level relative to its heyday. [9]

The ore deposit is a porphyry type, similar to many large copper deposits, where many intersecting small veins of molybdenite form a stockwork in an altered quartz monzonite porphyry. Like other porphyry-type ore deposits, the ore is low-grade, much less than one percent molybdenum, but the ore bodies are very large. Beside molybdenum, the mine has also produced tin (from cassiterite), tungsten (from hübnerite), and pyrite as by-products.

Mining was principally by "sub-level induced panel caving", a method that removed ore by undercutting the base of a panel in the ore deposit, causing the rock above to break and drop down in a controlled manner. The method allowed economical extraction of the large low-grade ore deposit.

The ore was crushed on-site, and the molybdenite was separated from the waste material by froth flotation. The large quantities of waste, called tailings, were placed behind tailings dams in the adjacent drainage to the north. The Climax tailing impoundment now covers several square miles.