Singapore is a small, heavily urbanised, island city-state in Southeast Asia, located at the southern tip of the Malayan Peninsula between Malaysia and Indonesia. Singapore has a total land area of 778 km² and 193 km of coastline. It is separated from Indonesia by the Singapore Strait and from Malaysia by the Straits of Johor. 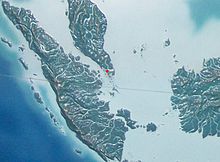 Singapore (highlighted in red) is located at the southern tip of the Malayan Peninsula.

Singapore's main territory is a diamond-shaped island Pulau Ujong, although her territory includes surrounding smaller islands. The farthest outlying island is Pedra Branca. Singapore is slightly more than 3.5 times the size of Washington DC. Of Singapore's dozens of smaller islands, Jurong Island, Pulau Tekong, Pulau Ubin and Sentosa are the larger ones. Most of Singapore is no more than 15 meters above sea level. The highest point of Singapore is Bukit Timah, with a height of 165 m (538 ft) and made up of igneous rock, granite. Hills and valleys of sedimentary rock dominate the northwest, while the eastern region consists of sandy and flatter land. Singapore has no natural lakes, but reservoirs and water catchment areas have been constructed to store fresh water for Singapore's water supply.

Relative humidity has a diurnal range in the high 90s in the early morning to around 60% in the mid-afternoon, but does go below 50% at times. In May 2009, the average relative humidity was 83%, an increase over the figure of 79.1% in May 2008.[3] During prolonged heavy rain, relative humidity often reaches 100%. Generally, there is much more rainfall on the western side of the island than on the eastern portion of Singapore, owing to a rain shadow effect. Thus, the eastern side of Singapore is much drier and slightly hotter than western Singapore. This can cause slight weather disparities from one side of the island to the other. This is significant to note because even a small hill such as Bukit Timah can cause this phenomenon. Despite Singapore's small size, there may be sunshine on one side while there is rain on the other.

Further contrasts that prevent true all-year uniformity are the monsoon seasons which happen twice each year. The first one is the Northeast Monsoon which occurs from December to early March. The second is the Southwest Monsoon season which occurs from June to September. Periods between monsoon seasons receive less rain and wind. During the Northeast Monsoon, northeast winds prevail, sometimes reaching 20 km/h (12 mph). There are cloudy conditions in December and January with frequent afternoon showers. Spells of widespread moderate to heavy rain occur lasting from 1 to 3 days at a stretch. It is relatively drier in February till early March. It is also generally windy with wind speeds sometimes reaching 30 to 40 km/h (19 to 25 mph) in the months of January and February. During the Southwest Monsoon season, southeast/southwest winds prevail. Isolated to scattered showers occur in the late morning and early afternoon. Early morning "Sumatra" squall lines are common.

Singapore is relatively safe from seismic activity in the region, as the nearest fault line is hundreds of kilometres away in Indonesia. However, the population and buildings are prone to being only very slightly affected by any activity as tremors, which is not uncommon, but generally does not do any harm and is limited to small amounts of swaying or vibration of objects. This is a sharp contrast to many of its seismically active neighbours.

In late 2004, several parts of Asia and Africa were struck by the 2004 Indian Ocean earthquake and the resulting tsunami. Singapore was fortunate as it was protected by the Sumatra landmass, which bore the brunt of the tsunami; the effect on Singapore was limited to tremors felt in some of the common high-rise buildings there. 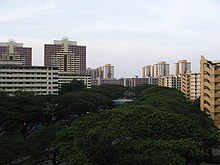 Singapore's urban geography is often characterised by extensive use of HDB flats, which the majority of citizens reside in, and the maintenance of parks.

When Singapore was first colonized by the British, the city of Singapore was situated on the southern coast, around the mouth of the Singapore River. This area remains the Downtown Core of Singapore. The rest of the island was farmland and primary rainforest. However, since the 1960s the government has constructed many new towns in other areas, so that today the island is nearly entirely built-up and urbanised, with only a few exceptions, such as Bukit Timah Nature Reserve or reclaimed land in the process of being developed. However, even though Singapore is nearly totally urban, the Central Area, which contains a high concentration of financial and commercial districts because this area is closest to Singapore's port.

The Urban Redevelopment Authority is the government agency responsible for the urban planning of Singapore, which seeks to implement efficient land use, minimise pollution while maintaining convenient transport, which are Singapore's largest concerns because of its situation as a city-state. A Development Guide Plan has been released in the process. In order to reduce traffic congestion, Electronic road pricing (ERP) has been enacted around entrances into the Central Area. The other parts of Singapore are less dense and busy, and are often filled with housing estates such as from the Housing Development Board (HDB) or condominiums, and commercial districts are less concentrated. However, to reduce strain on the Central Area, several regional centres have been developed, each containing a concentrated commercial district.

The causeway (1,038 m in length) was designed by Coode, Fizmaurice, Wilson and Mitchell of Westminster and constructed by Topham, Jones & Railton Ltd of London. It was started in 1909 as a railway link by Johor State Railway to connect Johor Bahru to Singapore, then the administrative headquarters of British interests in Southeast Asia. Construction of the road section started in 1919 and completed in 1923.

The causeway has caused ecological problems, most notably accumulation of silt in the Johore Strait. This has led to disagreements with Malaysia. Singapore has rejected Malaysia's proposal to replace the causeway with a bridge, and Malaysia has since proposed the idea of what became known as "the crooked half-bridge", descending halfway to link up with the low-level causeway.

Since Singapore lacks natural freshwater rivers and lakes, the primary source of domestic water is rainfall. Demand for fresh water is approximately twice that supplied by rainfall, so Singapore imports much of its fresh water from Malaysia and Indonesia. To lessen its reliance on imports, Singapore has built reservoirs to collect rainwater and recycled water facilities. In addition, Singapore has built a desalination plant on the western coast of Tuas. This plant is expected to at least meet half of Singapore's water demands. Recent plans to produce NEWater-recycled water from treatment by filtration via reverse osmosis have been very successful as the government has opened up three plants around the island to help meet the demand. 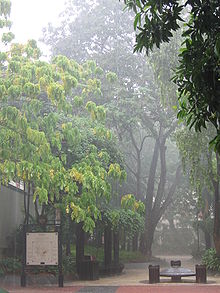 Afternoon thunderstorms are a frequent occurrence in Singapore, which has a tropical rainforest climate.

exclusive fishing zone: within and beyond territorial sea, as defined in treaties and practice
territorial sea: 3 nautical miles (5.6 km)

Climate: Equatorial; hot, humid, rainy; monsoons are expected from mid-November till early March and from mid-June till early September, heavy downpours are expected to be frequent during this period ; thunderstorms occur on 40% of all days (67% of days in April)