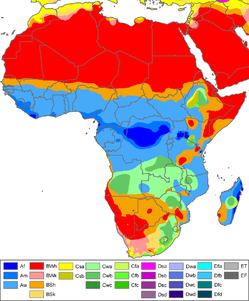 Climate zones of Africa, showing the ecological break between the desert climate of the Sahara and the Horn of Africa (red), the semi-arid Sahel (orange) and the tropical climate of Central and Western Africa (blue). Southern Africa has a transition to semi-tropical or temperate climates (green), and more desert or semi-arid regions, centered on Namibia and Botswana. 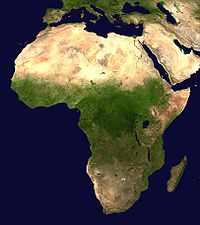 A map of Africa showing the ecological break around the Sahara

The climate of Africa ranges from tropical to subarctic on its highest peaks. Its northern half is primarily desert or arid, while its central and southern areas contain both savanna plains and very dense jungle (rainforest) regions. In between, there is a convergence where vegetation patterns such as sahel, and steppe dominate. The movement of the Intertropical convergence zone, also known as the monsoon trough, creates a rainy season across central portions of the continent to the south of the Sahara. Tropical waves moving offshore Africa caused by the African easterly jet lead to many of the northern Atlantic's tropical cyclones annually. The Sahara is the hottest and driest portion of Africa due to the presence of the subtropical ridge.

Globally, heating of the earth near the equator leads to large amounts of upward motion and convection along the monsoon trough or Intertropical convergence zone. The divergence over the near-equatorial trough leads to air rising and moving away from the equator aloft. As it moves towards the Mid-Latitudes, the air cools and sinks, which leads to subsidence near the 30th parallel of both hemispheres. This circulation is known as the Hadley cell and leads to the formation of the subtropical ridge.[1] Many of the world's deserts are caused by these climatological high-pressure areas,[2] including the Sahara.

Temperatures are hottest within the Sahara of Algeria and Mali,[3] and coolest across the south and at elevation within the topography across the eastern and northwest sections of the continent. The hottest average temperature on Earth is Dallol, Ethiopia, which averages a temperature of 33.9 °C (93.0 °F) throughout the year.[4] The hottest temperature recorded within Africa, which is also the world record, was 57.8 °C (136.0 °F) at 'Aziziya, Libya on September 13, 1922.[5] Apparent temperatures, combining the effect of the temperature and humidity, along the Red sea coast of Ethiopia and Gulf of Aden coast of Somalia range between 57 °C (135 °F) and 63 °C (145 °F) during the afternoon hours.[3] The lowest temperature measured within Africa was −24 °C (−11 °F) at Ifrane, Morocco on February 11, 1935.[5]

The low-level easterly African jet stream is considered to play a crucial role in the southwest monsoon of Africa,[6] and helps form the tropical waves which march across the tropical Atlantic and eastern Pacific oceans during the warm season.[7] The jet exhibits both barotropic and baroclinic instability, which produces synoptic scale, westward propagating disturbances in the jet known as African easterly waves, or tropical waves. A small number of mesoscale storm systems embedded in these waves develop into tropical cyclones after they move from west Africa into the tropical Atlantic, mainly during August and September. When it lies south of normal during the peak months of the Atlantic hurricane season, tropical cyclone formation is suppressed.[8]

Its northern half of the continent is primarily desert or arid, containing the Sahara, while its southern areas contain both savanna plains, and its central portion contains very dense jungle (rainforest) regions. The equatorial region near the Intertropical Convergence Zone is the wettest portion of the continent. Annually, the rain belt across the country marches northward into Sub-Saharan Africa by August, then moves back southward into south-central Africa by March.[9] Areas with a savannah climate in Sub-Saharan Africa, such as Ghana, Burkina Faso,[10] [11] Darfur,[12] Eritrea,[13] Ethiopia,[14] and Botswana have a distinct rainy season.[15] La Niña results in wetter than normal conditions in Southern Africa from December to February, and drier than normal conditions over equatorial East Africa over the same period.[16] 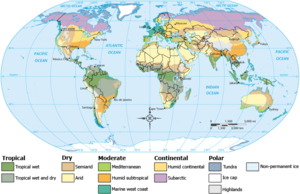 Within of Madagascar, trade winds bring moisture up the eastern slopes of the island, which is deposited as rainfall, and brings drier downsloped winds to areas south and west leaving the western sections of the island in a rain shadow. This leads to significantly more rainfall over northeast sections of the island than the southwestern portions of Madagascar.[17] Southern Africa receives most of its rainfall from summer convective storms and with extratropical cyclones moving through the Westerlies. Once a decade, tropical cyclones lead to excessive rainfall across the region.[18]