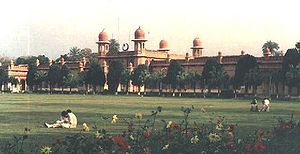 Agriculture University during a sunny day

The climate of Faisalabad features an arid climate. The climate of the district can see extremes, with a summer maximum record temperature of 48 °C (118 °F) was observed on May 26, 2010.[1] and a winter temperature of −1 °C (30 °F). The mean maximum and minimum temperature in summer are 39 °C (102 °F) and 27 °C (81 °F) respectively. In winter it peaks at around 21 °C (70 °F) and 6 °C (43 °F) respectively.[2] The summer season starts from April and continues till October. May, June and July are the hottest months. The winter season starts from November and continues till March. December, January and February are the coldest months.[2] The average yearly rainfall lies only at about 300 mm (12 in) and is highly seasonal with approximately half of the yearly rainfall takes place in July and August.